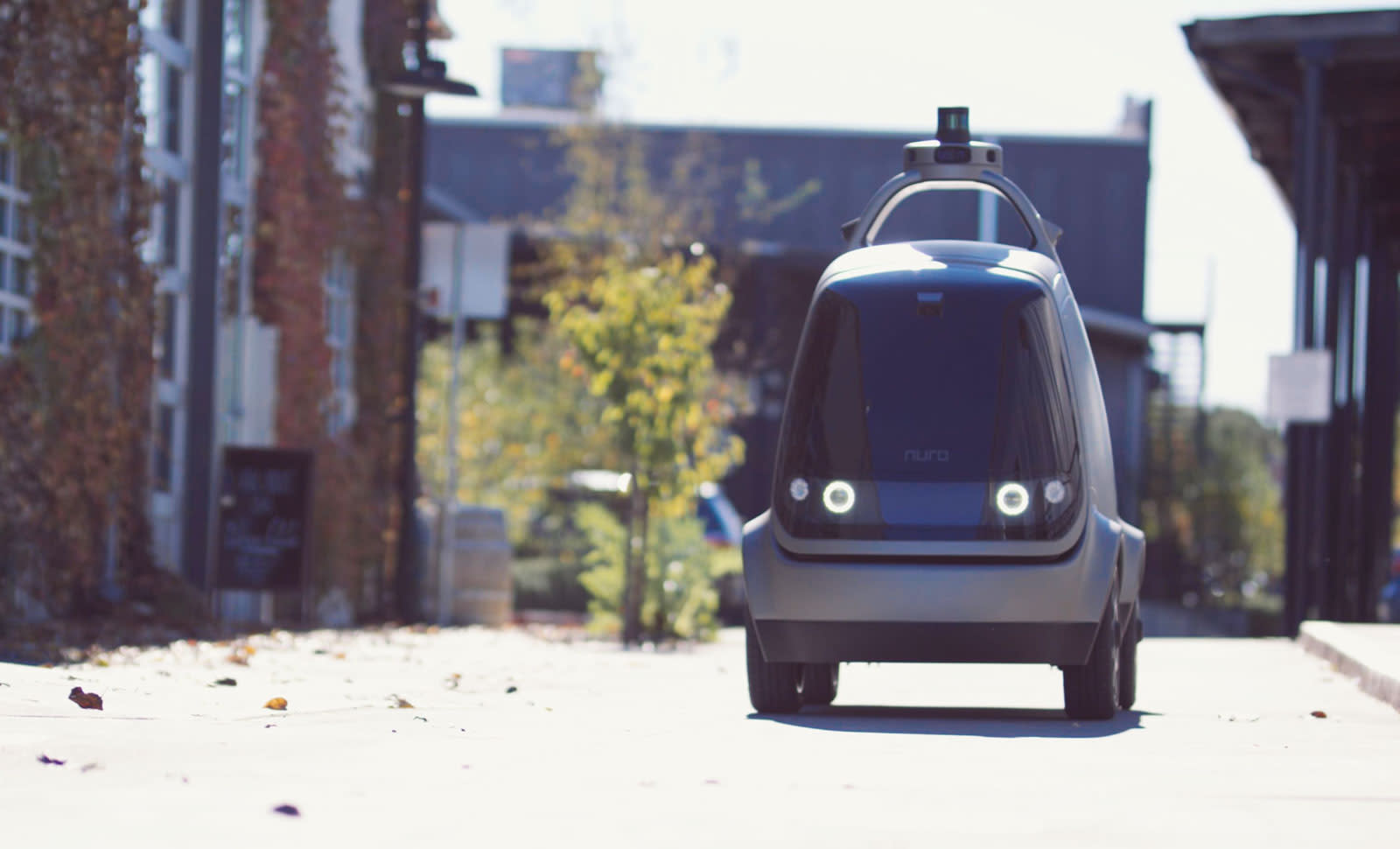 As Toyota proved by winning Engadget's Best of CES 2018 award for its e-Palette, robotic cars that can deliver things other than humans are coming at us fast. A new startup called Nuro is capitalizing on that idea, but taking a different angle with its self-driving electric van. Rather than carrying things over long distances, the narrow, lightweight vehicles are designed to carry packages, and only packages, on "the last mile" to buyers.

The Nuro vehicles are around the same size as a normal crossover vehicle, but only 3.5 feet wide and just 1,500 pounds, with a 250 pound maximum payload. There's a "windshield" so as not to alarm other drivers, but only space for food, boxes and other things -- not drivers. The interior can be customized for dry-cleaners, florists and other types of businesses. On top is a typical self-driving sensor array with LiDAR, cameras and radar that can guide the vehicle through traffic to its destination.

Nuro seemed to come out of nowhere, but it was started by two former engineers from Google's Waymo self-driving division, Dave Ferguson and Jiajun Zhu. The company has already rounded up $92 million in capital and some of the Bay Area's best engineers.

The fact that Nuro's cars are relatively slow, take up little lane space, and carry no passengers gives the company a competitive leg-up, its founders believe. "For us, there are just some things we don't need to worry about [like passengers]," Ferguson told Bloomberg. "Most of these things sort of drive like my grandma."

Nuro's system is pretty unique, but it has some formidable competition. Automakers like Ford and GM are working on their own self-driving cars for passengers and delivery, and a firm called Starship Technologies is experimenting with sidewalk robotic deliveries. On the same day Nuro launched, another startup called Udelv did the first demonstration of its own delivery vehicle, carrying groceries from a Silicon Valley store to a pair of customers, the Financial Times reports.

Nuro has a permit from the California DMV to test its technology, but still needs a US National Highway Traffic Safety Administration (NHTSA) signoff. Once it has that, it will test its technology using six self-driving cars, then apply what it's learned to the prototype vehicles.

In this article: Autonomous, delivery, gear, Nuro, Self-driving, transportation, Udelv
All products recommended by Engadget are selected by our editorial team, independent of our parent company. Some of our stories include affiliate links. If you buy something through one of these links, we may earn an affiliate commission.