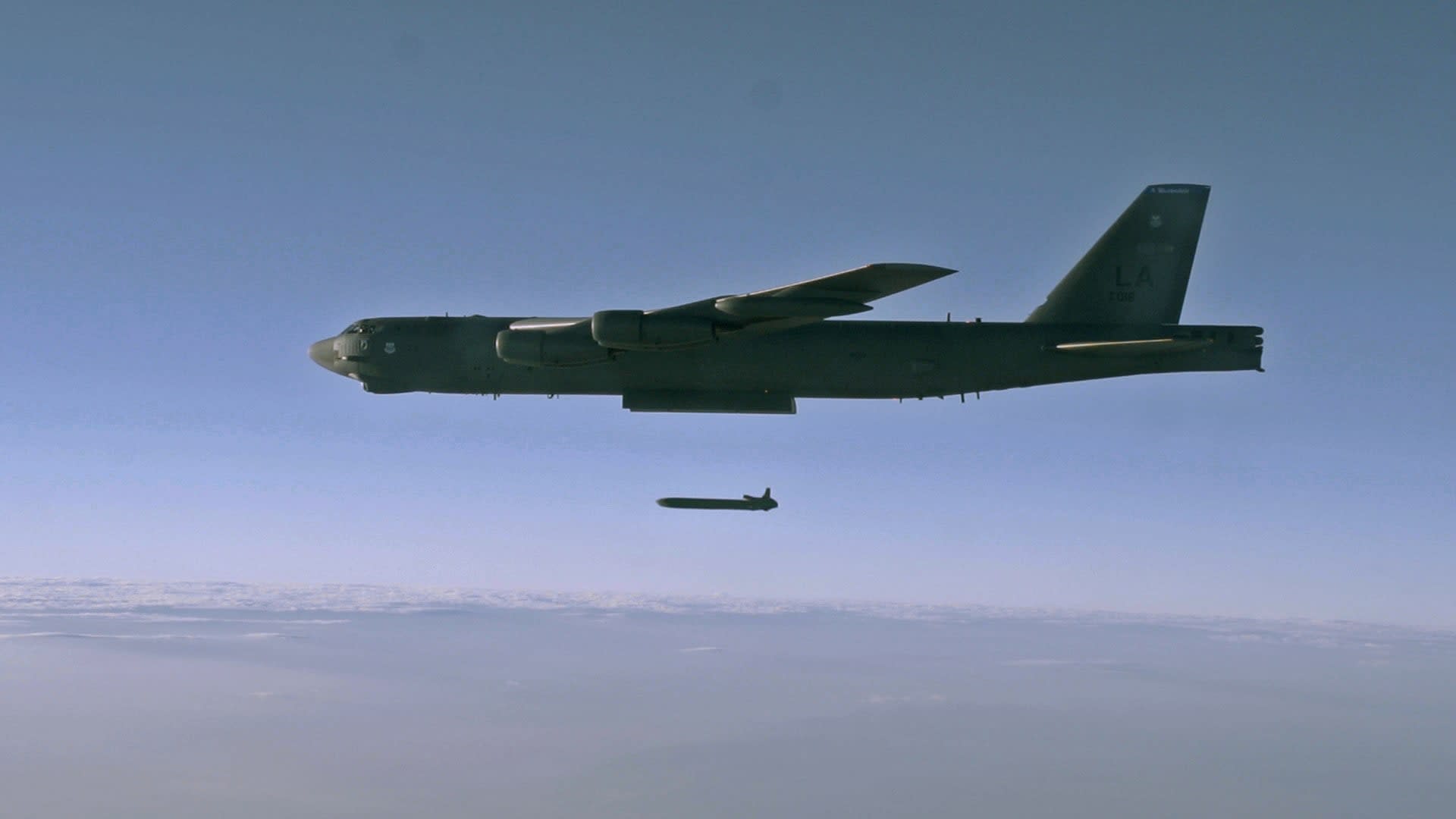 President Donald Trump is expected to cover five main topics in his first State of the Union address tonight, including the economy, immigration, infrastructure and trade. The fifth topic, national security, will put the spotlight on North Korea and the erratic, ad hominem nuclear standoff between North Korean leader Kim Jong-un and Trump himself.

The tension of this relationship has spilled over to Twitter, where Trump has lobbed insults and threats at Kim over the past year. Trump called Kim "little Rocket Man" and declared the US' "nuclear button" was "much bigger and more powerful" than Kim's. In August, Trump promised "fire and fury" if North Korea didn't stop testing nuclear weapons, and Kim later called Trump a "mentally deranged dotard."

Meanwhile, North Korea carried out more than a dozen nuclear tests throughout 2017, including launching intercontinental ballistic missiles theoretically capable of striking the US mainland. Its most recent ICBM test was in November.

Despite the public peacocking and Trump's historically cavalier attitude toward nuclear weapons, his administration hasn't outlined its official plans for the US stockpile. That changes in February, when the White House is set to release the 2018 Nuclear Posture Review (NPR), an update from the 2010 position endorsed by President Barack Obama.

This is Trump's chance to lay out his vision for modernization. A draft of these plans leaked earlier this month, giving us a peek at the administration's approach to nuclear weapons on the world stage. When Trump discusses North Korea and nuclear technology during the State of the Union, here's what he's actually saying. 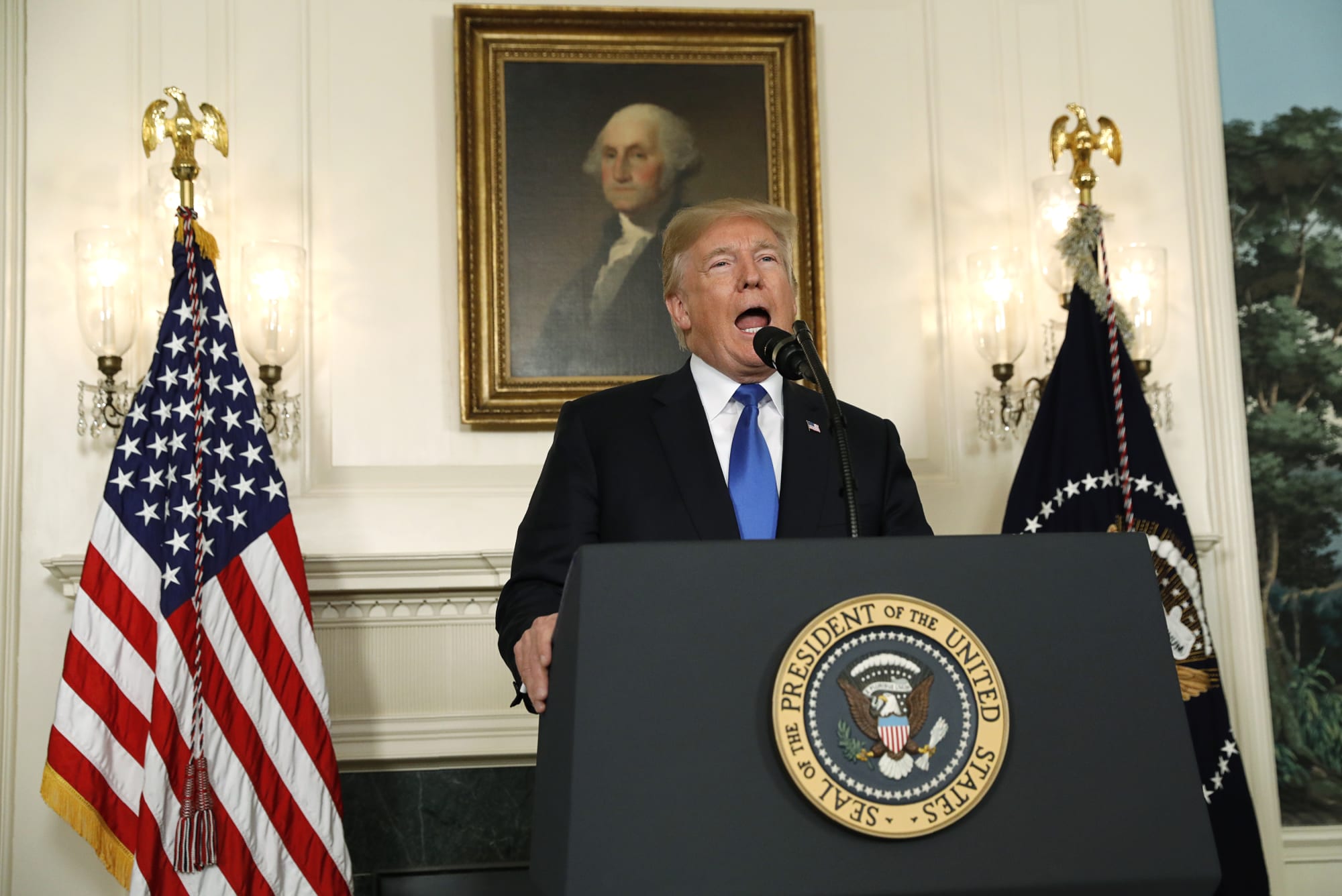 Much of the draft review follows in the footsteps of previous administrations, keeping intact Obama's $1.25 trillion plan to update aging nuclear infrastructure and warheads, largely in response to Russia's modernization efforts. As enemies in the Cold War, the US and Russia held a vast majority of the world's nuclear arsenal: At the height of the standoff, the US built 45,000 nuclear weapons while the USSR manufactured 95,000. Disarmament agreements since then have nudged those numbers down, and there are currently 15,000 nuclear weapons on Earth. The US has 6,800 warheads while Russia has an estimated 7,000.

Presidents since Richard Nixon have reduced the size of the US nuclear arsenal: President George H.W. Bush cut 9,500 weapons from the program, or 41 percent, while President George W. Bush eliminated 5,000 warheads, or roughly half of the remaining stockpile. President Obama took a less aggressive approach, allocating money for modernization and jettisoning just 702 warheads by 2016.

However, the Trump proposal would actually add nuclear warheads to the US inventory in the form of "low-yield weapons." The draft NPR calls these supplements, and they're largely in response to the perceived Russia threat. The US has an existing stockpile of about 1,000 low-yield weapons. 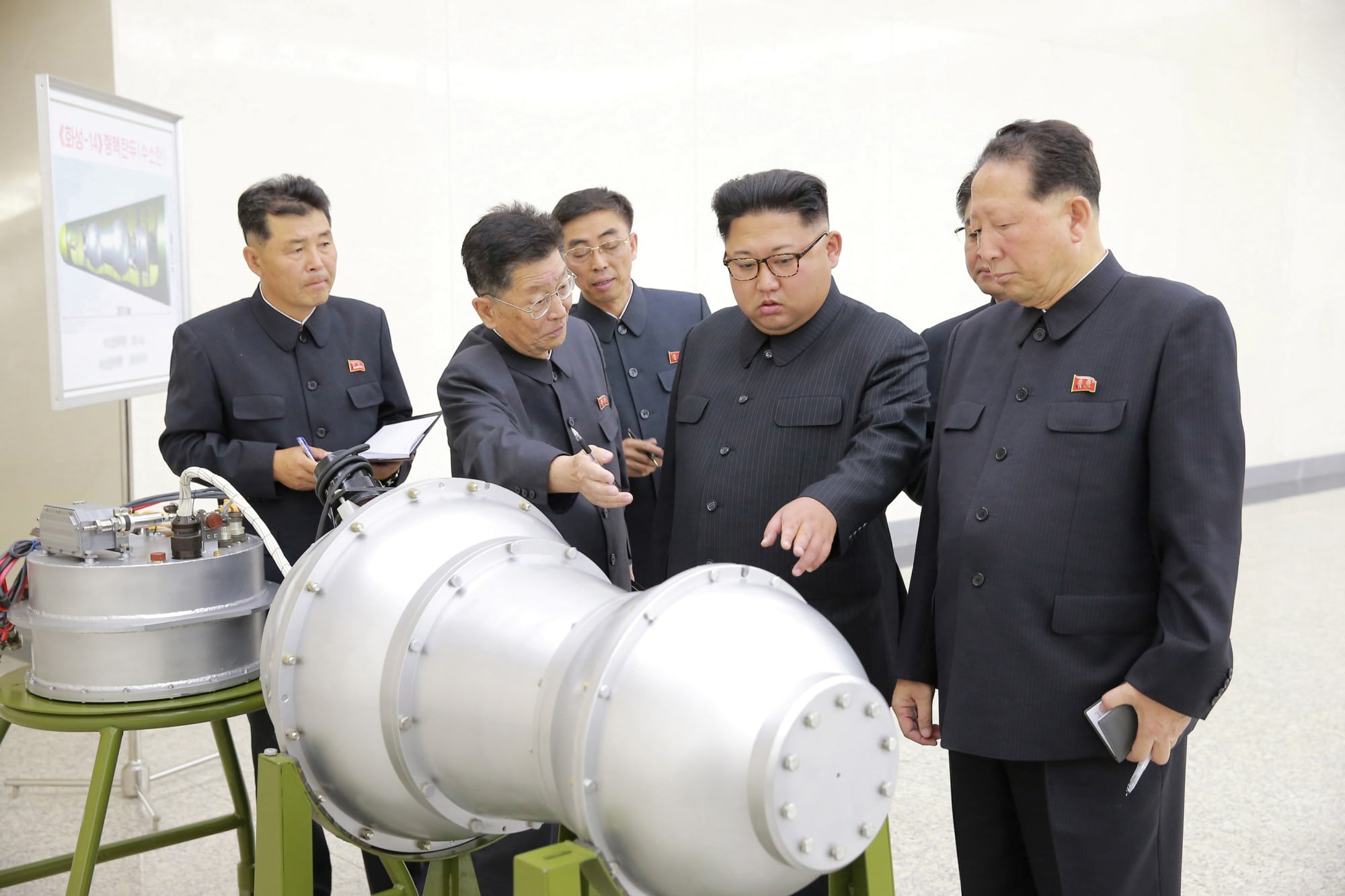 "These supplements will enhance deterrence by denying political adversaries any mistaken confidence that limited nuclear employment can provide a useful advantage over the United States and its allies," the review reads. "For example, Russia's belief that limited nuclear first use, potentially including low-yield weapons, can provide such an advantage is based, in part, on Moscow's perception that its greater number and variety of non-strategic nuclear systems provide a coercive advantage in crises and at lower levels of conflict."

Despite the name, low-yield nuclear weapons are monstrous, city-destroying forces, comprising any warhead under 20 kilotons. Little Boy and Fat Man, the nuclear bombs dropped on Japan during World War II, were low-yield, and they killed more than 120,000 people combined, scorching Hiroshima and Nagasaki bare.

The US and other countries are constantly researching new types of nuclear weapons. Recently, scientists have been focused on building more-agile and accurate nuclear bombs, including ideas like directed-energy devices, which would explode in a targeted direction.

"The most recent that I've seen -- and it strikes me as just bizarre -- is that they've started strapping GPS guidance systems onto nuclear bombs so that it can be guided the same way our cruise missiles and so forth are," Richard Rhodes, author of The Making of the Atomic Bomb, told Engadget in May. "Instead of being, let's say, accurate within 30 feet of a target, it would be accurate within 3 feet of a target."

The draft doesn't mention GPS-guided missiles or directed-energy devices specifically, though these are the future technologies keeping scientists busy around the world. There are nine countries with nuclear-weapons capabilities today: the US, Russia, China, France, the United Kingdom, Pakistan, India, Israel and North Korea.

The draft argues many of these countries are building up their nuclear inventories, giving the US reason to beef up its own stockpile. In the age of nuclear proliferation, this is a tired story -- it's essentially the same reason the Obama administration gave to justify its $1.25 trillion modernization plan, though the Trump NPR paints a pointedly bleak portrait of world affairs:

[Russia and China] have added new types of nuclear capabilities to their arsenals, increased the salience of nuclear forces in their strategies and plans, and engaged in increasingly aggressive behavior, including in outer space and cyber space. North Korea continues its illicit pursuit of nuclear weapons and missile capabilities in direct violation of United Nations Security Council resolutions. ... There now exists an unprecedented range and mix of threats, including major conventional, chemical, biological, nuclear, space and cyber threats, and violent non-state actors. These developments have produced increased uncertainty and risk.

In this din of fear, the draft review proposes lowering the barrier for deploying nuclear weapons.

The draft takes its cue from the 2010 NPR when it says, copied verbatim, "The United States would only consider the use of nuclear weapons in extreme circumstances to defend the vital interests of the United States, its allies, and partners." However, the updated version expands the definition of such events: "Extreme circumstances could include significant non-nuclear strategic attacks. Significant non-nuclear strategic attacks include, but are not limited to, attacks on the US, allied, or partner civilian population or infrastructure."

Essentially, the draft opens the door for the US to respond to a devastating cyberattack with a nuclear strike. Perhaps a low-yield strike, even. Previously, the US has been averse to a first-use scenario, pledging to launch nuclear weapons only if the country were directly targeted by other nukes. 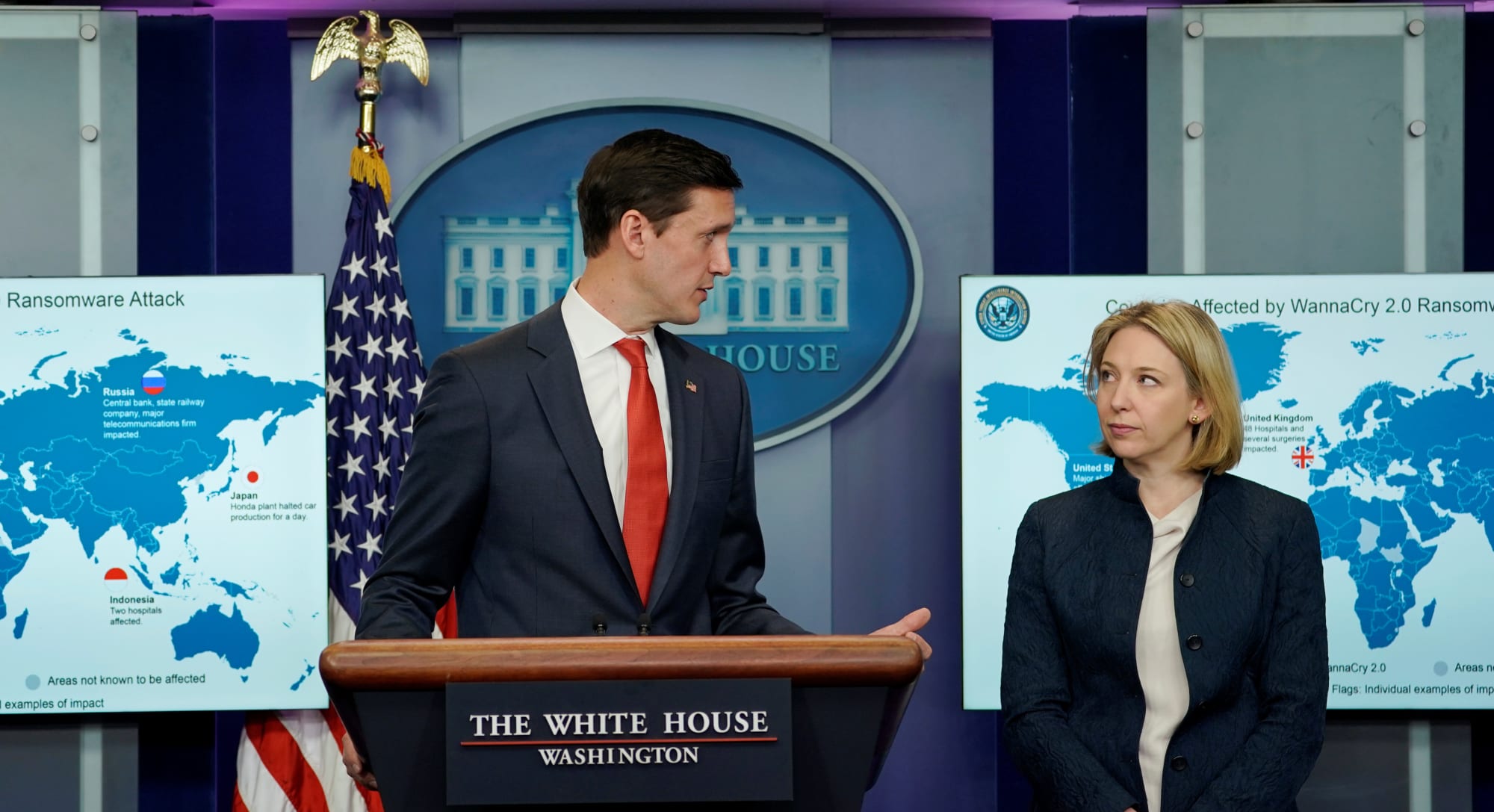 "It's actually incredibly alarming that the Trump administration is putting forth the idea that we could use nuclear weapons in response to a cyberattack," Alexandra Bell of the Center for Arms Control and Non-Proliferation told National Public Radio on Monday. "The Trump plan actually puts multiple options on the table -- nuclear weapon in response to a chemical attack, to a biological weapons attack, to an attack on civilians without a real description of where that threshold is and really widens the options for President Trump to use nuclear weapons."

Post-nuclear politics are finicky, as world leaders play chicken with world-destroying weapons. This has been the norm for more than 50 years: Countries with nuclear weapons can grab the world's immediate attention by making a threat or even just (loudly, publicly) investing in their arsenals. Whenever the US makes noise about its nuclear weapons, for instance, Russia is sure to respond with its own announcements and investments, and vice versa.

This is nuclear diplomacy in action. The US Intelligence Community's 2017 Worldwide Threat Assessment acknowledges this aspect of the nuclear ecosystem, particularly in regards to North Korea -- a country that does not actually want to use its nuclear weapons, according to experts.

"We have long assessed that Pyongyang's nuclear capabilities are intended for deterrence, international prestige, and coercive diplomacy," the assessment reads.

To that end, the US and other countries have signed a series of treaties meant to deter nuclear proliferation and even rid the world of nuclear weapons altogether. The most notable of these is the Treaty on the Non-Proliferation of Nuclear Weapons (NPT), enacted in 1970. Signatories agree not to build or acquire new nuclear weapons and promise to disarm completely. One hundred and ninety-one countries have signed the NPT, including the US and Russia. North Korea signed it in 1985 but withdrew in 2003. The United States now faces a more diverse and advanced nuclear-threat environment than ever before.

A draft of the 2018 Nuclear Posture Review

Adding nuclear weapons to the US stockpile is in direct opposition to the NPT, and the authors of the draft review are aware of this fact.

"The United States remains committed to its efforts in support of the ultimate global elimination of nuclear, biological and chemical weapons ... Nevertheless, global threat conditions have worsened markedly since the most recent 2010 NPR, including increasingly explicit nuclear threats from potential adversaries," the draft reads. "The United States now faces a more diverse and advanced nuclear-threat environment than ever before, with considerable dynamism in potential adversaries' development and deployment programs for nuclear weapons and delivery systems."

The view from here

Just as the State of the Union offers a chance for the president to lay out his vision of the future, the draft of the Nuclear Posture Review provides a snapshot of the Trump administration's approach to national security and its view of the world in general. It's a fairly terrifying planet from this lens, one that Trump has vowed to fight with "fire and fury" -- much as Harry S. Truman, the president who dropped the nuclear bombs on Hiroshima and Nagasaki, predicted in his diary in 1945:

"We have discovered the most terrible bomb in the history of the world. It may be the fire destruction prophesied in the Euphrates Valley Era, after Noah and his fabulous Ark."