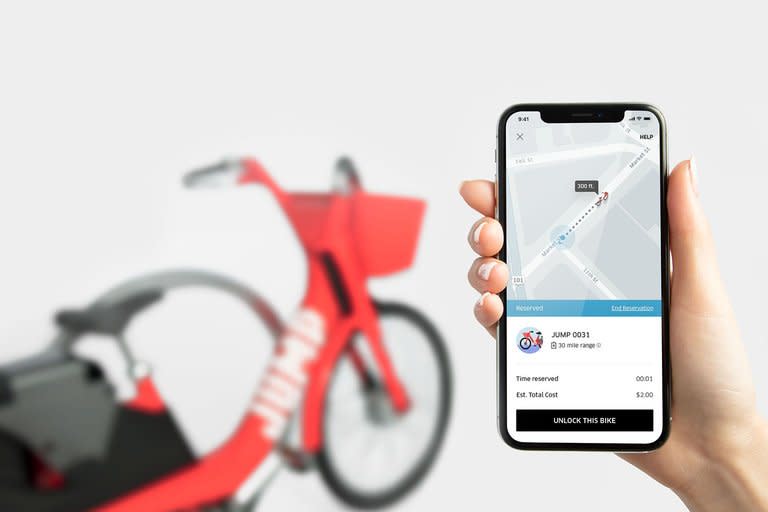 Uber's piloting a new service in San Francisco alongside dockless bike-sharing startup Jump. Uber Bike will let users rent one of Jump's 250 bikes, charging $2 for the first 30 minutes and an additional per-minute fee thereafter. Jump was granted a permit by the San Francisco Municipal Transportation Agency earlier this month, which made it the first company to operate a dockless bike-sharing program in the city. Jump's 250 bikes should launch around the city between now and March and the SFMTA may allow the company to release 250 more after nine months, depending on how things go. The permit was issued for 18 months, during which the SFMTA will evaluate the program and the public's response.

Uber's pilot program will initially be available to users who travel in the areas of San Francisco where Jump's electric bikes will be available. Others will be able to join a wait list. "We're always kind of searching for options to make transportation affordable and more accessible for people," Andrew Salzberg, Uber's head of transportation policy, told TechCrunch. "It fits into this larger vision, we think, that there can be multiple modes of transportation that can be made available through the Uber app. There are lot of places where there are many trips that it's probably going to be quicker and cheaper to hop on a bike. Strategically, it makes a lot of sense for us as a business."

This program certainly isn't the only bike-sharing option in San Francisco. Ford launched a GoBike program in 2017 and its fleet should number 7,000 bikes by the end of this year. However, Ford's bikes must be docked at a station whereas Jump's can be left wherever it's legal to park a bike. For now, Ford's fleet is made up of traditional bikes, but by April it will have pedal-assist electric bikes as well. Last year, another dockless bike-sharing company, LimeBike, said it had applied for permits to operate in San Francisco, but while the city's pilot program with Jump is ongoing, it won't grant permits to any other dockless programs. LimeBike does have a program up and running in nearby South San Francisco.

Uber says that it's focusing on the San Francisco pilot for now, but it could be adopted more widely in the future. "You don't do a pilot if you don't have hopes to make it a vision for the future," Salzberg told TechCrunch.

In this article: BikeSharing, business, Dockless, ElectricBicycle, ford, gear, GoBike, jump, limebike, SanFrancisco, services, transportation, uber, uberbike
All products recommended by Engadget are selected by our editorial team, independent of our parent company. Some of our stories include affiliate links. If you buy something through one of these links, we may earn an affiliate commission.