How Mike Schultz went from pro snowmobiler to Paralympic athlete.

Mike Schultz was a professional snowmobile racer, and a damn good one at that. But in 2008, his life's course took a turn after a competition accident shattered his left knee and left him clinging to life. When his injuries began causing his kidneys to shut down, doctors decided to amputate the leg just above the knee.

"I spent a total of 13 days in the hospital and was able to get back home on Christmas Eve to a whole new world of challenges," he told Engadget. "Later that spring, after learning how to walk on my everyday prosthetic leg, I realized pretty quickly that I needed a plan B to get back into sports and the fun activities that I wanted to do." That plan B turned out to be designing his own prosthetic leg -- one purpose-built to handle the rigors of extreme sports -- and starting a fabrication company, Biodapt, to produce it. Thus, the Moto Knee was created.

Unlike the mechanical prosthetic that he relearned to walk on -- or even the powered, computer-controlled one he uses daily -- the Moto Knee is designed for riding. "When you walk, you need the leg to swing back and forth underneath you," Schultz explained. "It needs to flex at a certain point, then extend as you follow through your gait. Now, that function doesn't really help at all while I'm standing on my dirt bike or snowmobile." Instead, the Moto Knee mimics a squatting motion.

"I needed a knee system that would have some spring resistance in it to help keep extended while I'm standing up," he continued. "Then allow it to absorb the impact from the rough terrain." As such, the knee can be adapted to a wide variety of activities, from skiing to horseback riding, "basically any type of board sport," Schultz said. "Whether it be wakeboard, skateboard or snowboard. Water sports, water skiing, ice skating, anything where your main action with your leg is to have your quadriceps engaged to push off from or to absorb pressure and impact."

And though the knee is adaptable to work with a variety of lower-leg prosthetics, Schultz has also developed a corresponding ankle joint to work alongside it, dubbed the Versafoot. "For my equipment, we're not about running. We're about wheels, action sports, and that type of thing," Schultz said. "So we want range of motion and shock absorption. The foot itself has 28 degrees of ankle motion as you press into it, or you put weight into it. A typical running or walking foot has kind of around 10 to 12, at max, flex at the toe." 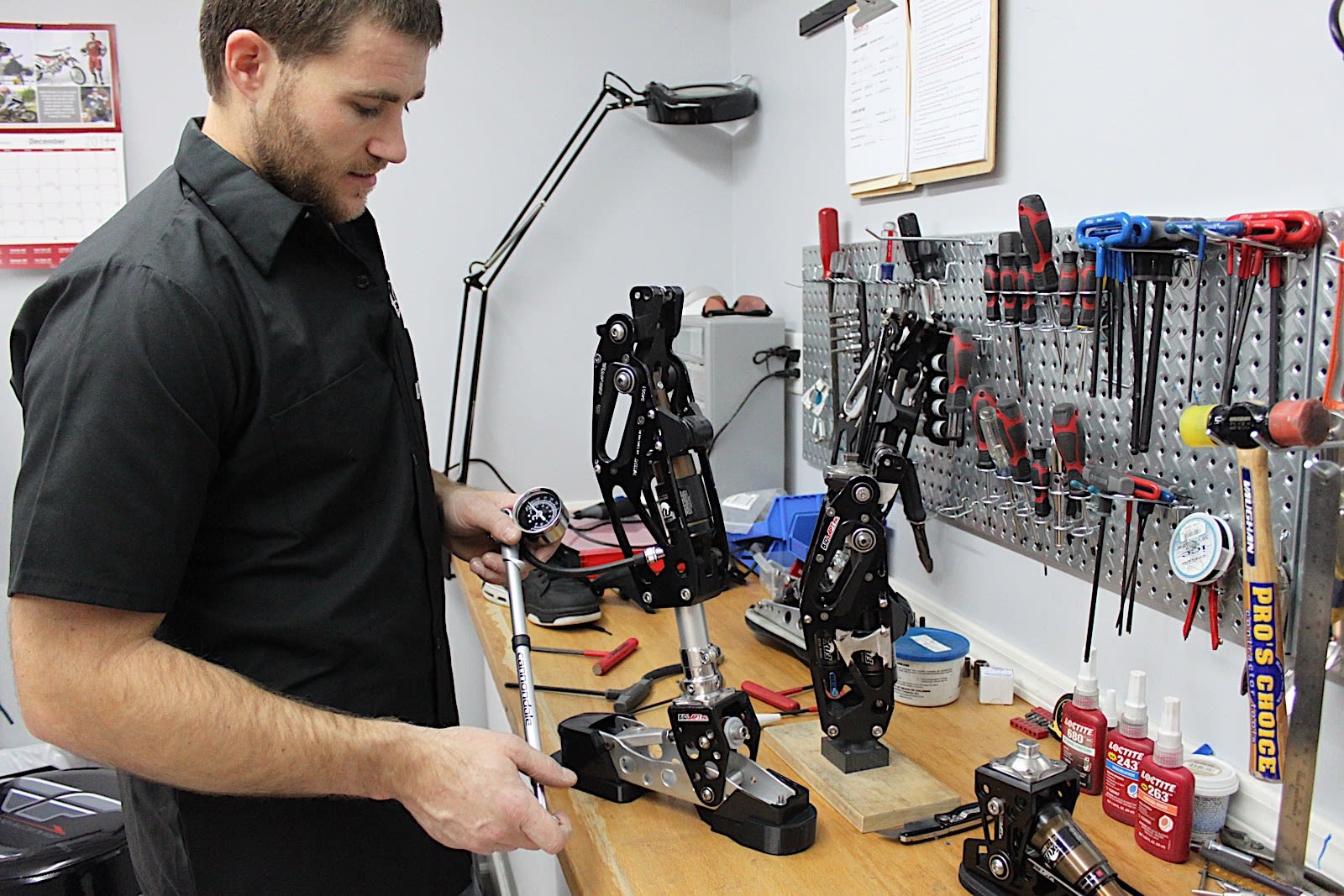 However, despite the capabilities of his prosthetics, Schultz does not see them as as imparting any sort of significant competitive advantage. "The only thing that some of the guys questioned right away... I had to put an electric shifter on my dirt bike because I can't flex my ankle on demand to shift gears, so I had to put an electric system on it," he told Engadget. "People were like, 'Whoa, what's that? Are you sure? Can you do that?' I'm like, 'Come on, look at me, man. I've got one leg.' But my physical disability far outweighs the enhancement I'm gonna get with this push button shifter."

That may not be the case for much longer, however. International competitions such as the Paralympics, which Schultz will be competing in come March, do not allow the use of actively powered prosthetics. In fact, the International Paralympic Committee rulebook explicitly states:

Equipment that results in sport performance not primarily being generated by the athlete's own physical prowess but being generated by automated, computer aided, or robotic devices is prohibited in IPC Sanctioned Competitions and Events, and at Paralympic Games.

Regardless, the state-of-the-art developments continue to march forward at a rapid pace. "At this time in the manufacturing industry, the sky is the limit with design, and prototyping options with 3D printing, and all this new CAD technology," he crowed. "I'm working on kind of three different modifications to some new equipment that I'm working on. I can't really tell what they are, but I will be utilizing some of the latest 3D printing technology. It's a great time to be in the development industry for sure."

In fact, both he and the rest of his boardsport teammates competing in Pyeongchang will be doing so using his company's prosthetics (not to mention a few members of his international competition). Beyond that, the sky truly is the limit, according to Schultz.

Prosthetics are getting smarter and more responsive by the day. "They're using implants in the muscles to control sensors. Radio sensors that control limbs, which is awesome," he said. Of course, that sort of technological advancement does not come cheap. "A drawback with all of that technology is it's extremely expensive," he conceded. "So it makes it unreachable for a lot of people, so that might slow things down a little bit."

And even Schultz is wary of the pace of these advancements though he remains hopeful. "It's a slow process especially when you get into implants, and nerve integration, and that type of thing. They've gotta do their homework and make sure it all works out well in the long run. But, the direction they're going is really cool."