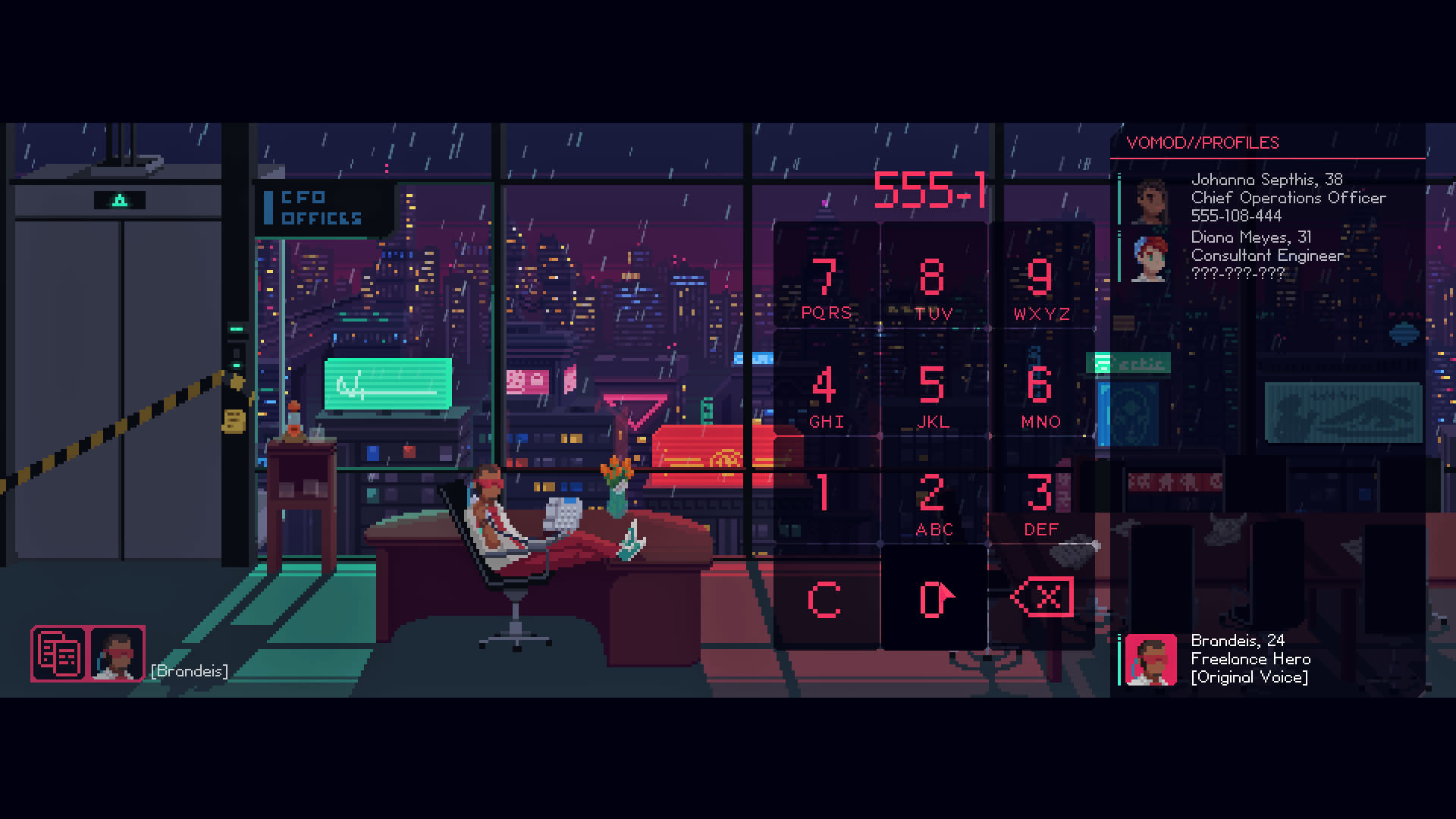 'The Red Strings Club' explores the morality of transhumanism

The creator of 'Gods Will Be Watching' has a new social experiment.

If you had the ability to turn off all the negative emotions in your mind -- depression, anxiety, rage -- would you do it? Would you eagerly implant a device in your body that eliminates those feelings, or would you pause and consider the consequences? Without anxiety, would your drive to succeed stagnate? Without rage, would your body be primed to fight or flee in a sticky situation? Without depression, would you appreciate joy?

Think about it for a moment. We'll wait.

Now, how would you feel if a massive corporation -- say, Google or Apple -- planned to remove every "negative" emotion from your psyche in a simple software update, with no warning and without your explicit consent?

The Red Strings Club, the latest game from indie studio Deconstructeam, doesn't just ask these questions -- it demands answers. The Red Strings Club is a narrative adventure game that looks like a pixelated sidescroller from the '90s, though the story takes place in the indeterminate future: AI-powered androids roam the streets, and people upgrade their bodies and lives with implants. Implants to make the user sexier, more successful on social media, better with money, or less concerned with other people's opinions, for example.

The company that makes these implants, Supercontinent Ltd., has a secret plan to eliminate "negative" emotions in the majority of the population, arguing the result would benefit society as a whole. As a bartender who deals in the city's secrets, a player attempts to thwart this program by mixing drinks specifically designed to bleed information from patrons, exploiting their unique character traits via assorted spirits.

Essentially, The Red Strings Club has players fight the specter of large-scale technological manipulation with small-scale chemical manipulation. It turns players into hypocrites -- and then calls them out for it.

"All the mechanics in the game are about manipulation," creator Jordi de Paco said. "You have these corporations that do implants and alter the lives of other people, and you have this bartender's ability to [modify] the feelings of other people. You are manipulating them, making them feel sad or happy. ... And the game actually makes you face these questions, it calls you a hypocrite."

It isn't just players who get called out in The Red Strings Club. In a moment that rattles the game's fourth wall, de Paco pokes fun at himself, the designer forcing players to grapple with these ridiculously complex moral decisions.

"There's a line in the game, towards the end, where an AI says that game design is the most powerful form of manipulation," he said, punctuated by a laugh.

De Paco doesn't have the answers. Instead, he's made a living asking moral and ethical questions in video games, and then watching thousands of people grapple with his twisted scenarios. His first game, Gods Will Be Watching, presented players with clear moral decisions, such as whether to kill a robot, a dog or a human in order to keep a group of people alive as they're stranded in the frigid wilderness.

"Gods Will Be Watching was really visceral, about eating your friends and killing people, stuff like that," de Paco said. "I find that the dilemmas in The Red Strings Club are more important to us because we're not usually in front of this situation of having to actually eat someone, but we are every day in the situation of having to think what's good and bad -- to what limits it's okay to go to be happy and where our liberty or freedom ends, and where other people stand." With Gods Will Be Watching, I wasn't really aware of the power of video games as a storytelling medium.

Gods Will Be Watching was de Paco's first attempt at infusing a video game with ethical and moral dilemmas, and it was a resounding success when it landed in 2014. Deconstructeam was thrust into a broader conversation about the power and creativity of indie games, and there was enough money in the bank to start working on the next thing. This time around, de Paco wanted to be more deliberate -- Gods Will Be Watching was unfiltered, and in the end, its message got away from him.

"With Gods Will Be Watching, I wasn't really aware of the power of video games as a storytelling medium or maybe as communicating a message, so I kind of just made the game and put a lot of my instinctive philosophy in there," de Paco said. "I realized that I accidentally made an anti-system game, in which you have to go against any form of authority, so this time I tried to actually be aware of what I am telling and what I'm doing with the game."

The result is a concise yet branching cyberpunk story about the awful power massive technology companies can assert over people's daily lives (and bodies and minds). Through this lens, de Paco asks players how far they would go to obtain or sustain happiness, and what it truly means to be human. When we lose our emotions, do we lose our humanity?

Although the game offers a range of answers in its dialogue trees, it doesn't actually wrap all of these questions up in a nice ethical bow. They're not meant to be answered; they're de Paco's grand social experiment, designed to provoke thought and conversation. And here, it seems The Red Strings Club has succeeded.

De Paco said the game itself takes about three or four hours to complete on a standard playthrough. However, many Twitch streamers end up playing for something like 10 hours because they spend most of the time talking through the game's direct questions with the live chat.

"It comes in really lengthy conversations about what if it's good or not to get rid of emotions, or how it might benefit society," de Paco said. "It's really great."

Some of the game's questions are far-fetched scenarios specific to this particular future, but others feel relevant to life today. Scientists may not have developed implants that can alter our character yet, but we enjoy a common stimulus in caffeine and a depressant in alcohol. We have pills that promise to calm, excite and otherwise change our moods. We play with our emotional states every day.

This is a harsh reality for de Paco: Two years ago, some close friends and family members started taking antidepressants, and the experience made him question the essence of humanity on a grand scale, sparking the theme of The Red Strings Club.

"It makes you wonder if they're still the same person or if they're happier or not," de Paco said. "For me, writing this kind of magic technology that is able to remove depression and everything was a way for myself to explore, to cope with the idea of people close to me being changed."

De Paco isn't on a mission to end the antidepressant industry. In fact, he wishes the effects of these drugs could be streamlined like in The Red Strings Club, allowing people to alter their moods like code. "I wouldn't mind to change that for an implant or maybe just changing a variable instead of having to go through the process of taking pills or being medicated," he said.

If he were given the option, de Paco wouldn't choose to remove any of his own negative emotions, arguing that would also eliminate a core part of his humanity. He's more into to the idea of digitizing his consciousness and ditching his body altogether.

"I would totally love to digitize myself," de Paco said. "I wouldn't mind not having this body, if I can feel pleasure, and, I don't know, take digital drugs or something like that. I would like to be digitized, but I wouldn't like to lose any of the aspects of my mind. I don't like being depressed, but usually being depressed is a way to know something is wrong and you have to do something about it. If I take those things from me, it's like I would lose my ability to discern what's good and bad."

Not that de Paco knows what's good and bad now -- he's still asking questions about the essence of humanity and observing his social experiments across Twitch, Steam and social media. He's still figuring it out. So is everyone else.

All products recommended by Engadget are selected by our editorial team, independent of our parent company. Some of our stories include affiliate links. If you buy something through one of these links, we may earn an affiliate commission. All prices are correct at the time of publishing.
View All Comments
'The Red Strings Club' explores the morality of transhumanism