"Discovery Tour" is a glimpse at how games can embrace education.

The Assassin's Creed series is known for its vast and richly detailed historical environments, and well... lots of murder. What you might not realize is just how much work goes into making these virtual windows into the past somewhat realistic. That's something Ubisoft is aiming to highlight with Assassin's Creed Origins' Discovery Tour. You can think of it as a museum-like experience set within the game's meticulous rendition of ancient Egypt. The goal? To turn one of the most popular gaming franchises in the world into a truly useful educational tool.

As you'd expect, there's plenty of helpful narration, historical photos and artwork in Discovery Tour. You also don't have to worry about getting killed, so you're free to explore as much as you want. The developers brought in Egyptologists to craft 75 guided tours, which cover things like the city of Alexandria, daily life of Egyptians, the Great Pyramids and the Sphinx.

You can jump right in to tours from the game's menu and map, and they usually involve following a golden path to various checkpoints. During a brief demo, I learned how Alexandria was founded, and why its location along the Nile delta was particularly strategic. I was surprised to discover a few things I didn't come across in school, even though I spent a few years studying ancient history. I also encountered a few photos and diagrams I hadn't seen before, showing modern excavations and illustrations of what the city might have looked like.

Discovery Tour lets you choose from several models in the game as your avatar. I enjoyed exploring Egypt as Cleopatra, but you can also choose from Julius Caesar, the main characters of the game and a host of side characters. It was strange seeing Assassin's Creed Origins in another light, after spending dozens of hours in the game murdering scores of Roman soldiers, hunting Egyptian wildlife and serving as the sword for a deposed Cleopatra. But, it made me appreciate the game all the more. 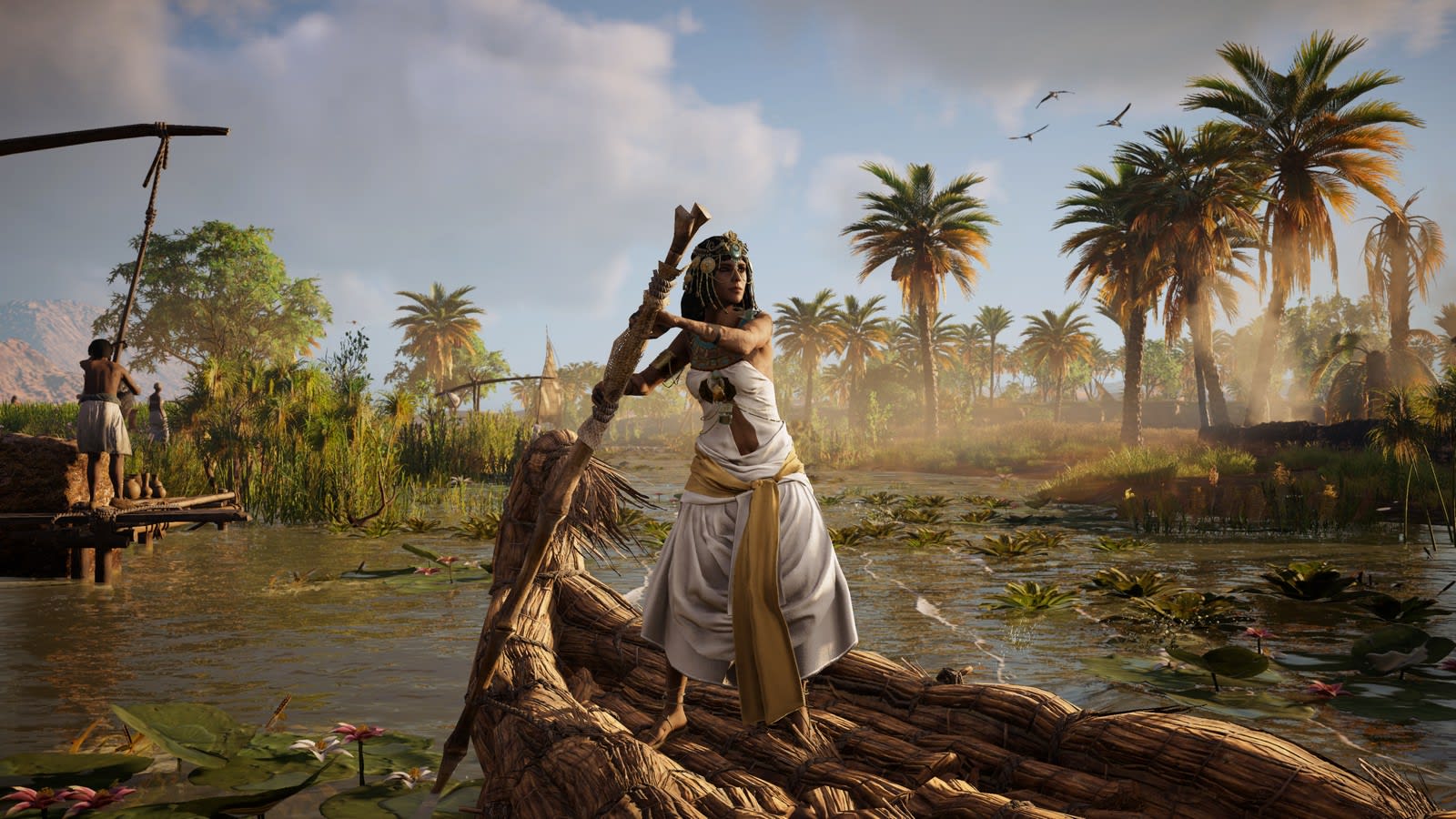 Jean Guesdon, creative director of Assassin's Creed Origins and Black Flag, tells Engadget that his team's mission for the series is to "make history everyone's playground." They were inspired to make Discovery Tour after fans of the franchise pointed out that it actually helped them learn about major historical events. When it came time to start development of Origins, he pitched the mode as part of his vision for the overall game.

"Culturally at Ubisoft, this kind of initiative is well perceived," Guesdon says. "Our CEO keeps telling us we need to enrich players' lives. To go beyond the entertainment, and to try and bring them either knowledge or skills. Think about Rocksmith, the guitar game where you could actually learn to play. So yes, I had to convince some people [to make Discovery Tour], but it wasn't that tough."

Development for Discovery Tour took about six to seven months. But that also doesn't include time Maxime Durand, the series' historical researcher, spent chatting with educators to determine what they actually need. Having an educational mode in mind also influenced the way Ubisoft built out the game's world, Guesdon says. There's a village completely dedicated to pottery specifically because he knew there would be a lesson about that. 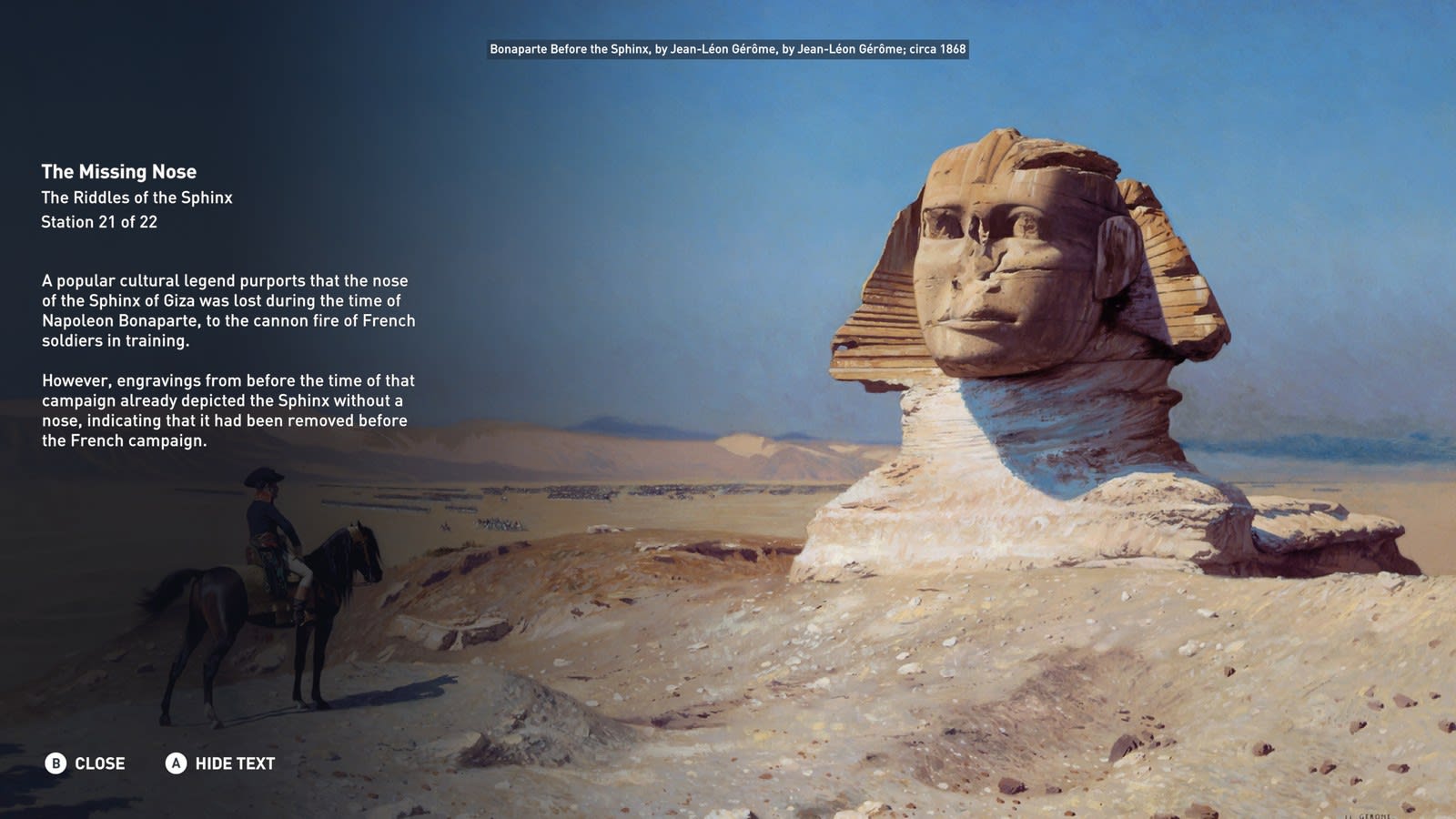 The tours point out how things like the developer's rendering of the city of Alexandria, with its wide streets and grid structure, is rooted in historical research. Some of the lessons also show where Ubisoft's more fantastical storytelling diverges from reality, like how they chose to include a secret tomb in the Sphinx, something that's long been rumored among actual historians. While wandering around Egypt, you can also participate in what the locals are doing. If you stand next to a breadmaker, for example, your character goes through the entire process of preparing dough and baking tiny triangular loafs.

Owners of Origins will get the Discovery Tour for free on February 20th, but it's also going to be available as a $20 standalone title. The latter option should be useful for schools and libraries, since it won't include any of the violent parts of the full game. Still, the title Assassin's Creed might be a turnoff for some educators. But Ubisoft has plenty of reasons to think it can help teach history, based on feedback from the series' fans, as well as its own research. 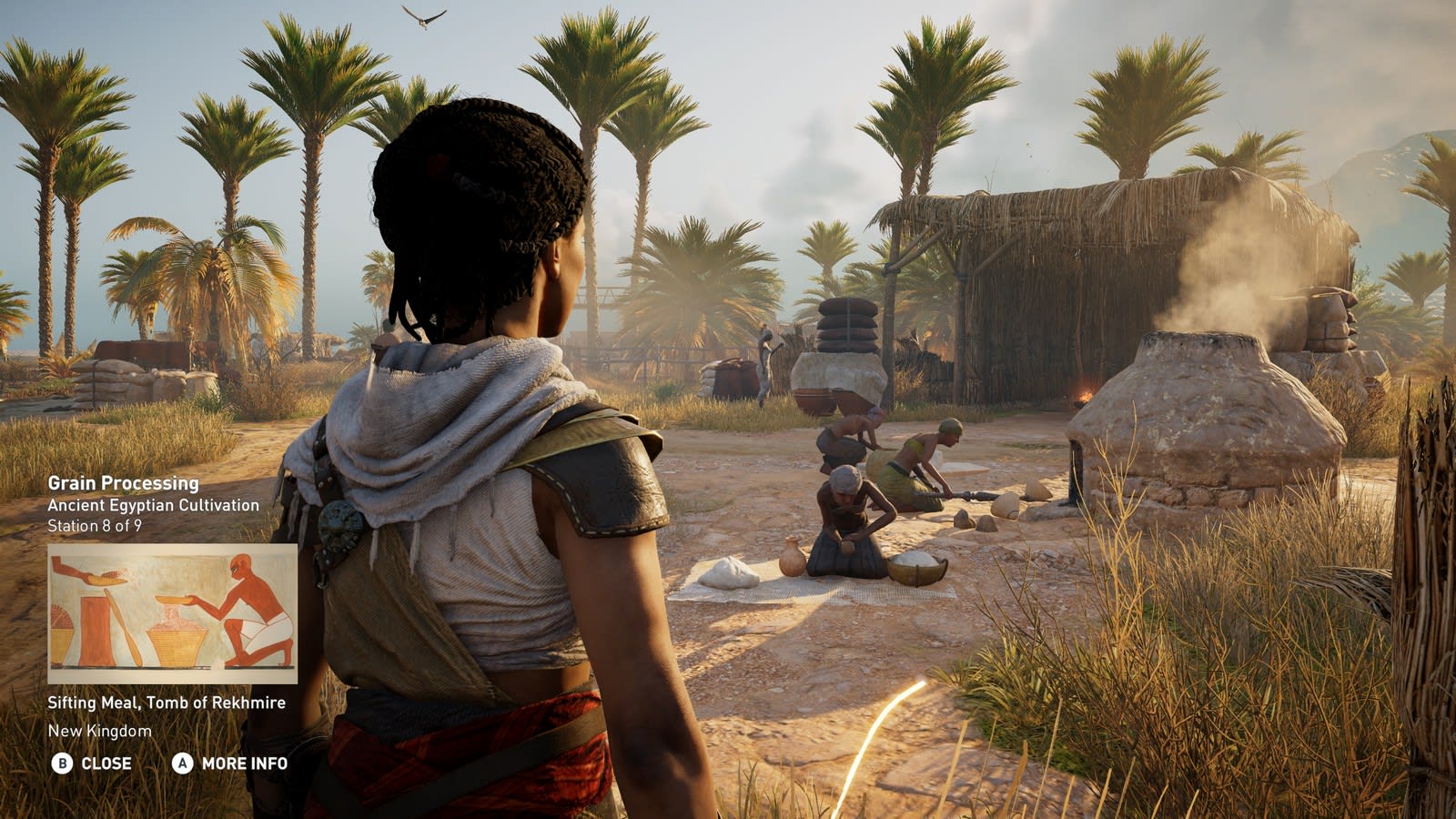 In one study, they had half of a history class learn about ancient Egypt while playing the game, while the other half was taught a traditional lesson by their teacher. In the end, 55 percent of the students who went through the normal class passed a follow up quiz, while 42 percent passed it after playing Discovery Tour. Only 22 percent of the students passed a preliminary quiz, prior to those lessons.

Now that schools are leaning into the benefits of interactive learning, especially with titles like Minecraft, I wouldn't be surprised if more gaming franchises started including educational experiences. Based on what I've seen from Assassin's Creed Discovery Tour, it's an intriguing way to learn, even if it's no replacement for a real teacher.