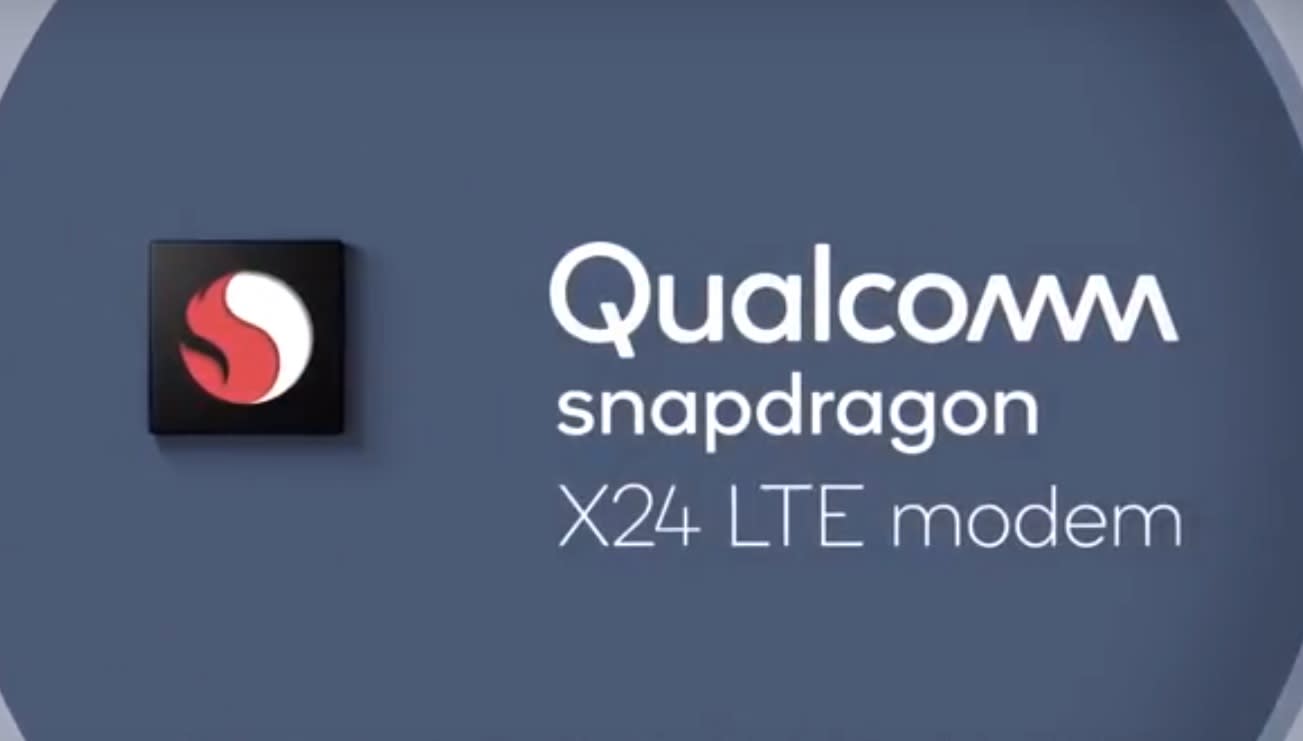 Even as the race toward real-world 5G picks up steam, LTE technology as it exists will remain crucial for most of us in the next few years. Qualcomm's latest gigabit LTE modem, the X24, can reach speeds of 2 Gbps (where supported by carriers) -- a significant jump from the 1.2 Gbps promised by its predecessor, the X20. And just as that modem was eventually embedded into the Snapdragon 845 chipset announced in December, it's likely that the X24 will be integrated in Qualcomm's next premium mobile chip, which we can expect to power many of next year's flagships. In fact, you can expect it to show up in commercial devices in the first half of 2019, according to the company's announcement video.

The X24 achieves the speeds it can because it supports "up to 7x carrier aggregation on the downlink" as well as 4X4 MIMO on up to five aggregated carriers. In the uplink, Snapdragon X24 supports Category 20 upload speeds, 3x20 MHz CA and up to 256-QAM. If those words mean nothing to you, here's an explainer to help make sense of it.

According to Qualcomm, this is the first commercially announced Category 20 LTE modem supporting 2 Gbps speeds to be announced. Not only that, and more impressive, it's also the first chip built on a 7 nanometer process, which would translate to potential power savings. Qualcomm says it has started sampling the new modem, and expects to demonstrate the X24 live at MWC later this month, in conjunction with Telstra, Ericsson and Netgear. We'll be sure to check it out for ourselves then to see if these theoretical speeds bear out in the real world.

A lot of other factors affect your data speeds of course, and one of the most important is carrier support. While many service providers have begun working on gigabit LTE in earnest, the faster network still isn't completely deployed nationwide.

Qualcomm also announced two new software offerings -- an SDK for its IoT LTE modem (MDM9206) and a set of "wireless edge" services for enterprise and industrial use. The SDK will make it easier for device manufacturers to design applications for their products, like LTE-connected lamps, cameras, ovens, washing machines, sensors and more.

As we continue to march towards 5G, the technology for gigabit LTE continues to be an important part of mobile data. The X24 modem will likely arrive in devices in consumers' hands around the same time as the first 5G phones will, making it a key part of a hopefully smooth transition in 2019.

In this article: 5g, gadgetry, gadgets, gear, gigabit, LTE, mobile, qualcomm, smartphones, snapdragonx24
All products recommended by Engadget are selected by our editorial team, independent of our parent company. Some of our stories include affiliate links. If you buy something through one of these links, we may earn an affiliate commission.