There are cars out there that fill a need in someone else's life. Maybe you live in a large city and don't have the room or desire for a truck with a powerful diesel engine. Or you're part of a couple that has no need for an SUV with seats for eight. For me, the Smart Fortwo Cabrio EV seemed to fit the bill of cars that would be good for someone, just not me. I like electric cars, but I also need something large enough to haul gear and, well, I like going fast. Then I spent a week with the tiny EV. 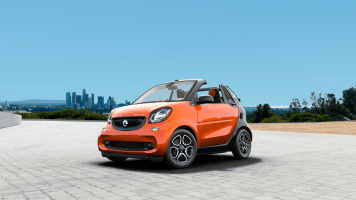 The $28,100 Smart Fortwo Electric Drive Cabrio takes the existing tiny-car platform, throws in an electric motor and makes it a convertible just for fun. It has a range of 57 miles and a footprint that would fit into the back of most pickup trucks. That small size is the allure, and an occasional curse, of the Fortwo.

The obvious benefit of its size is that you can park it almost anywhere. In San Francisco, that's a blessing. I could fit it into side street spaces that don't have meters because there's always a spot that no other car would fit into, and if a motorcycle isn't already there, it's yours. Parking in my neighborhood at night, usually a 20-minute chore, became a game of "can I fit in that tiny spot?" Nine times out of 10, I could. 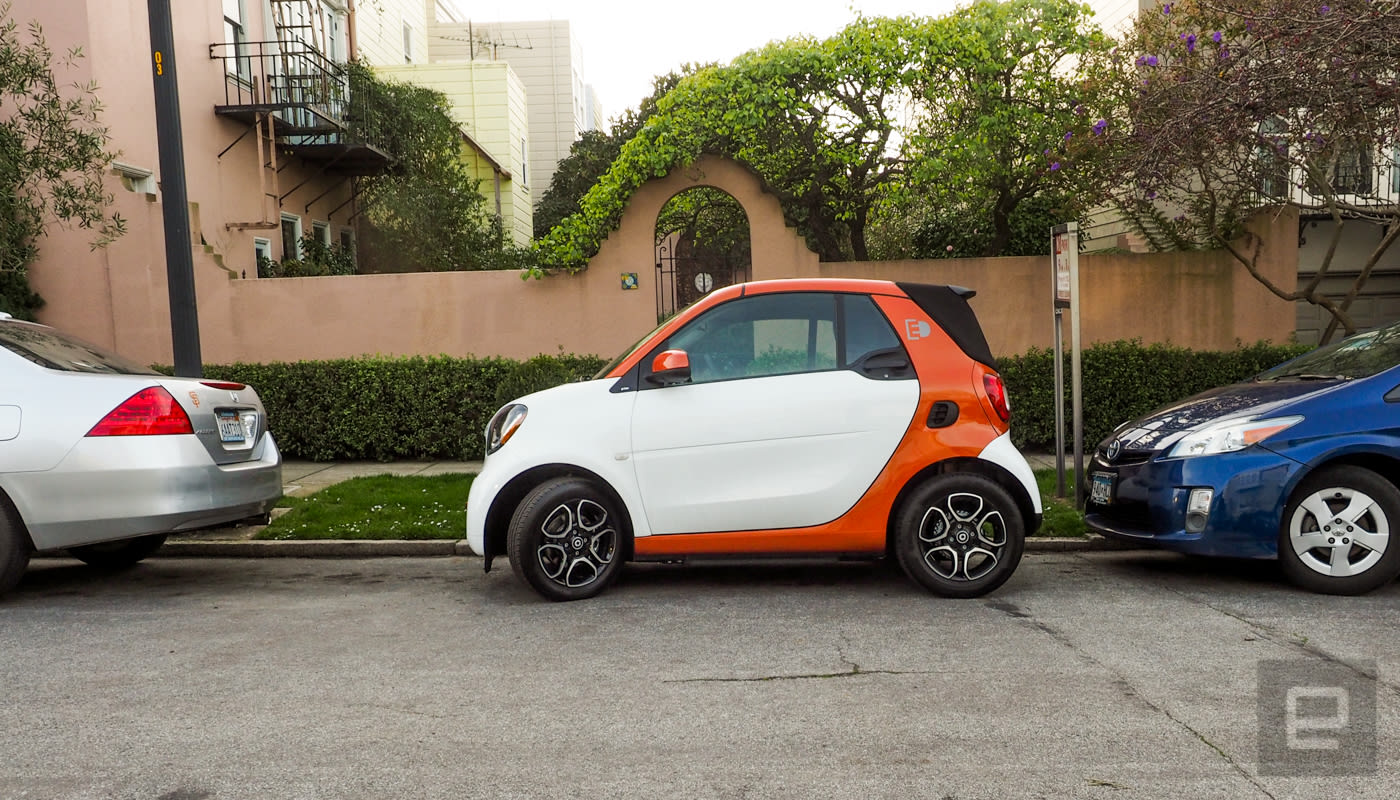 The car has a short wheelbase (a shade over six feet) and a tight 11.4 feet turning circle (for comparison a Honda Fit's is 17.5 feet). Thanks to those, the vehicle made easy work of even the tightest parking lots and structures. Other cars at weird angles? Spots by the wall with an SUV spilling over the parking lines? None of those are problems for the Fortwo driver -- it's a tiny parking machine.

But that size also makes some people uncomfortable; friends wondered how safe it was. The Fortwo earned "good" ratings from the IIHS and a four-star crash rating from NHTSA for the 2017 version (the 2018 version -- which is the same design -- has not been rated). We've been conditioned in this country to think "larger is safer." The Fortwo is safe even if some of the people I talked to thought otherwise.

Still, the micro compact does suffer from some issues due to its size. Potholes, even small ones, jostle the car. During my drives on some of San Francisco's barely maintained roads, it felt more like I was off-roading than heading to work.

I also had to adjust to the fact that the (already minute) trunk of the Fortwo had shrunk thanks to the convertible top. Grocery shopping was fine if I went alone, as I could place bags in the passenger seat. Otherwise, expect to limit purchases to four half bags (with the tops folded over) of goods. And forget large bundles of toilet paper or paper towels, those will end up in the passenger's lap. Initially, I found these limitations to be more than I'd be willing to endure in my day-to-day life, but the Fortwo grew on me. I accepted the ride quality and lack of practical storage as tradeoffs for the ability to park anywhere I wanted. Plus, I could put the top down (which I did frequently) whenever the sun was out. Even when the high of the day was 50 degrees, I'd put the top down.

During those slightly cold, but sun-filled jaunts I acquainted myself with the vehicle's infotainment system. If you're expecting Mercedes-level quality (Benz is Smart's parent company), you're going to be disappointed. The optional 7-inch touchscreen does have navigation and a media player, but its support of Android Auto is its "best" feature. Sadly, there is no love for CarPlay.

Surprisingly, my 6-foot 3-inch frame didn't feel cramped in the car, although there was never a chance to see how I felt after a long trip since it's built to stick close to home. The 17.6kWh battery's 57-mile range makes sure of that. Not that I would really want to take it on a long drive.

The Fortwo borrows side-wind stabilization from the Mercedes Sprinter van line, but the car is truly at home in an urban environment. Even with the charge time cut in half from six to three hours from the previous version (thanks to a 240-volt charger) you'd still spend far more time waiting for the battery to top up than actually driving to your destination.

My battery tests yielded a range of about 54 miles per charge in city traffic. When I hit the freeway for any length of time, the range dropped dramatically, as it does with all EVs. And yet, even with the short range, the rough ride, almost no trunk space, and the limited infotainment system, the little car grew on me. The Fortwo is not exactly zippy, but the EV torque is still slightly spirited and combined with tight steering makes it an enjoyable drive. Dropping the top was just a bonus.

That extra sunshine is pricey though. Starting at $28,100, the Cabrio version of the Fortwo is over $4,000 more than the hardtop version of the EV (which starts at $23,900). That's a steep price to pay for the wind rushing through your hair. Still, even without a top, it's cheaper than the E-Golf and Fiat 500e: Both of those creep over the $30,000 mark. But those cars also have more room and range, so it's a trade-off. Of course, all of those prices are before any government tax credits for buying an EV.

The Smart Fortwo Electric Drive Cabrio is an odd little car. Other than being a convertible, it doesn't hit any of the checkmarks on the list of features I need. If anything it reminds me of why I love riding my Vespa in San Francisco. It's small and nimble but powerful enough to keep up with highway traffic. Plus I can park it anywhere. A bonus is that it's fun to ride. The Fortwo is a bit like that. It's a fun utility that doesn't quite make sense, but sometimes you just enjoy something for exactly what it is, and that's enough.