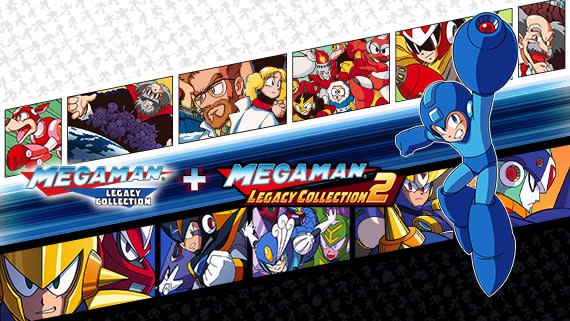 Mega Man fans were likely excited to hear that the next chapter in the venerable video game franchise, Mega Man 11, is slated for a release sometime this year. At the same time, Capcom announced plans to release two new Mega Man Legacy Collection compilations. Now we've got a date for their release on Nintendo Switch: May 22, 2018.

The first bundle brings the first six Mega Man games together, letting you shoot, slide and jump your way through the classic titles. Capcom also added a new save (almost) anywhere system so players can try tricky sections without having to worry about distant save points. In addition, there's a new rewind feature that lest you just back up a bit before a catastrophic mistake. Mega Man Legacy Collection also has a big gallery of concept art and box design, including the original Mega Man box art. There are songs from each game, too, and a challenge collection. Regular or golden Mega Man Amiibo toy owners will be able to access eleven extra fan-made challenges that have only been available on the Nintendo 3DS version of the game.

Mega Man Legacy Collection 2 includes Mega Man 7 through 10 from the Super Nintendo era, with 16- and 32- bit iterations of the action-platformer. Mega Man 9 and 10, both 8-bit retro throwbacks, will include all previously released DLC. The second collection also has a ton of art music, and challenges for each included title, and you'll be able to get more challenges via any Mega Man Amiibo. The first collection will run you $15 as a digital download; the second is $20. You'll also be able to buy the first collection and a code for the second one (along with a 30th anniversary cleaning cloth -- yay?) for $40 in May. We still don't know when Mega Man 11 (or Mega Man X titles) will show up on modern platforms, but we'll surely let you know when we do.

In this article: av, Capcom, collection, gaming, legacy, megaman, nintendo, retro, Switch, video, videogames
All products recommended by Engadget are selected by our editorial team, independent of our parent company. Some of our stories include affiliate links. If you buy something through one of these links, we may earn an affiliate commission.