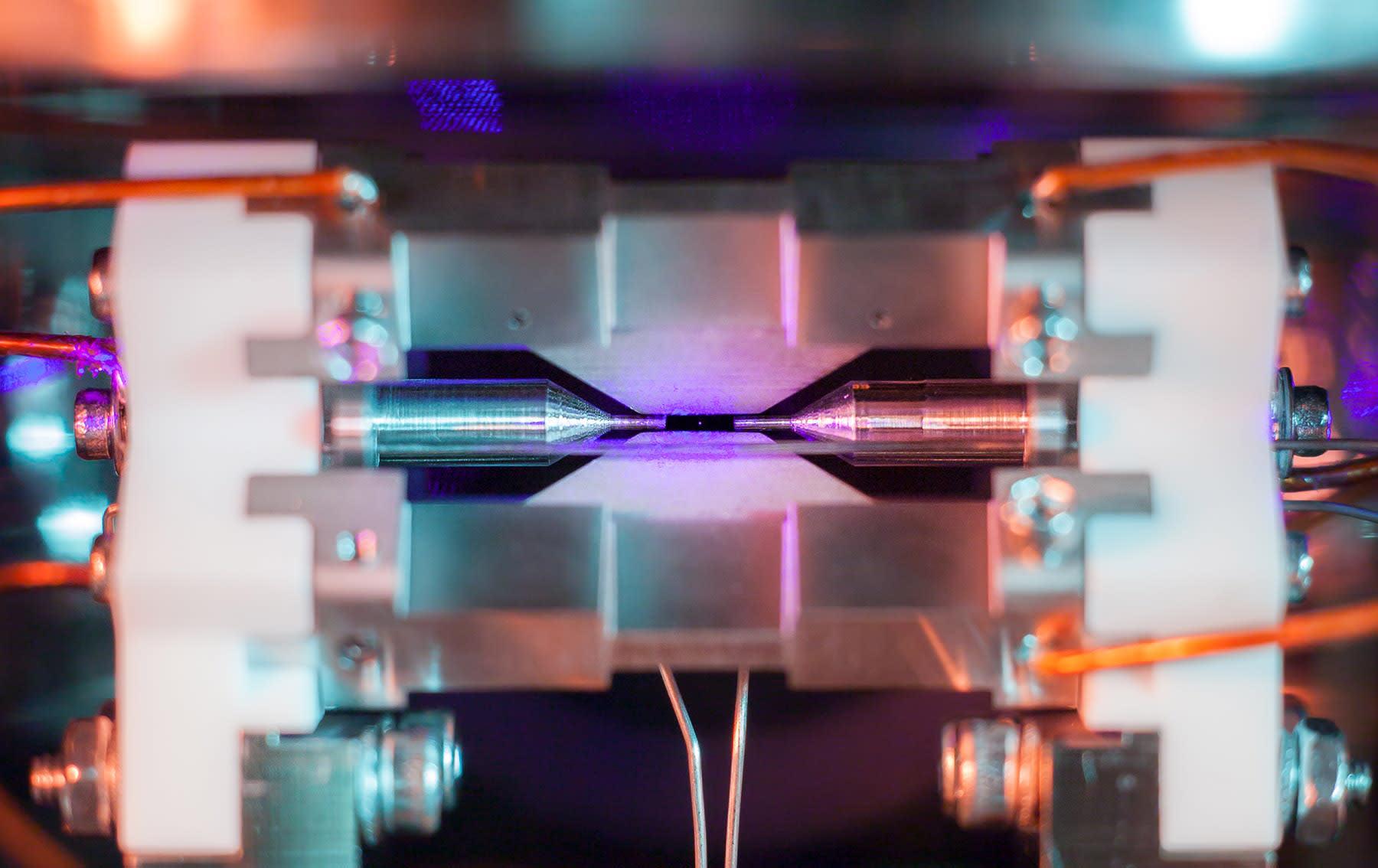 A 'trapped' atom is visible to the naked eye

The tiny dot in the center of the screen, between the two metal electrodes, is the light emitted by a single atom. The photo, Single Atom in an Ion Trap, just won the grand prize in the UK's Engineering and Physical Sciences Research Council (EPSRC) science photo and imaging contest. "The idea of being able to see a single atom with the naked eye had struck me as a wonderfully direct and visceral bridge between the miniscule quantum world and our macroscopic reality," said Oxford University quantum physics professor David Nadlinger, who took it.

To give an idea as to scale, the gap between the two needlike-like tips is about 2mm, less than a tenth of an inch, so the image is substantially enlarged. Still, it's a scale that we humans can relate to, unlike the nanometer size of the atom itself.

Here's how Nadlinger captured the image: A strontium atom was ionized by a laser, then trapped in an ultra-high vacuum chamber (aka, an ion trap) and hit by a blue-violet laser. It was held firmly in place by four electromagnet needles, including the two shown in the image and two others that are out of view. Those created something called a "rotating saddle potential," that trapped the atom in much the same way that a real rotating saddle can trap a physical ball.

Once stabilized, the strontium ion was hit by an array of lasers from multiple directions, which took it to near absolute zero. The blue-violet light is also just the right frequency so that the ion absorbs and re-emits the light. While a strontium atom is only about a quarter of a nanometer, the lasers created a glow that's hundreds of times wider than that (it moves a tiny bit, too). Even that would be barely big enough to see, so Nadlinger used some extension tubes and over-exposed the image in a process called "optic elaboration." (It was shot with a Canon EOS 5D Mark II and EF 50mm f/1.8 lens.)

Nadlinger noted that he's not the first to photograph an atom in this way; Nobel laureate Hans Dehmelt photographed a single barium atom in 1989. His effort, however, was better publicized thanks in part to the EPSCR photo contest. That aside, it's a great photo that literally brought an impossibly small world to light, and Nadlinger is one of the few people that could pull it off.

"A back-of-the-envelope calculation showed the numbers to be on my side, and when I set off to the lab with camera and tripods one quiet Sunday afternoon, I was rewarded with this particular picture of a small, pale blue dot."