Testing the Galaxy S9+ on a night out in Barcelona

The Galaxy S9 and S9+ didn't bring revolutionary changes to the table, but promised a "reimagined" camera that's supposed to change the way we use our mobile shooters. Most of the biggest changes Samsung implemented revolve around improving low-light photography, so what better way to make full use of our scenic surroundings here in Barcelona than to take the S9+ out for an evening sightseeing tour? Here's what we learned (other than that the Gothic Quarter is really pretty, and it can get pretty cold in Spain).

As you follow along below, check out full-resolution versions of the pictures here.

First, a quick overview of the S9+'s new tools. It has a Dual Aperture feature which has the primary camera jump from an aperture of f/2.4 to f/1.5 when it senses that the scene isn't bright enough. The wider opening lets in more light, and is currently the biggest on a smartphone, breaking the record previously held by the LG V30 at f/1.6.

Then there's multi-frame noise reduction, which was introduced in the S8 but enhanced in the S9 thanks to dedicated RAM built right into the sensor. This way, the camera can more quickly process the 12 images it uses per shot to reduce noise. Together with the dual pixel sensor that debuted in the S7, this is supposed to make for speedy and clear autofocus, even in challenging conditions.

Other features, like the S9+'s dual camera and the new super slow-mo video capture are less specific to low-light photography, but we tested them out in a variety of situations anyway.

Before we dive into the specific features, it's worth noting that in general, the S9+ takes pretty good photos. Samsung has more or less nailed its smartphone cameras, so this comes as no surprise. Both pictures and video have great colors and clarity, especially in daylight. Scenes that are largely shrouded in darkness appear well-lit, too -- to the point where they look even brighter than in real life, especially when shot in full auto mode. The Dual Aperture is largely responsible for the brighter images. Since you only have the option of jumping between f/2.4 or f/1.5 (instead of choosing stops in between), there's no way to finesse your settings to get a more realistic shot, unless you go into Pro mode. That's what I'd recommend, though.

One of the downsides of shooting at as wide an aperture as f/1.5 is that dynamic range suffers. Parts of the scene that are bright will be blown out, such as the restaurant in the background of my shot of a fountain. Switching over to Pro mode, I was able to use an aperture of f/1.5, push up my shutter speed and decrease ISO to not only reclaim some of that information, but also get a clearer, less noisy picture overall. 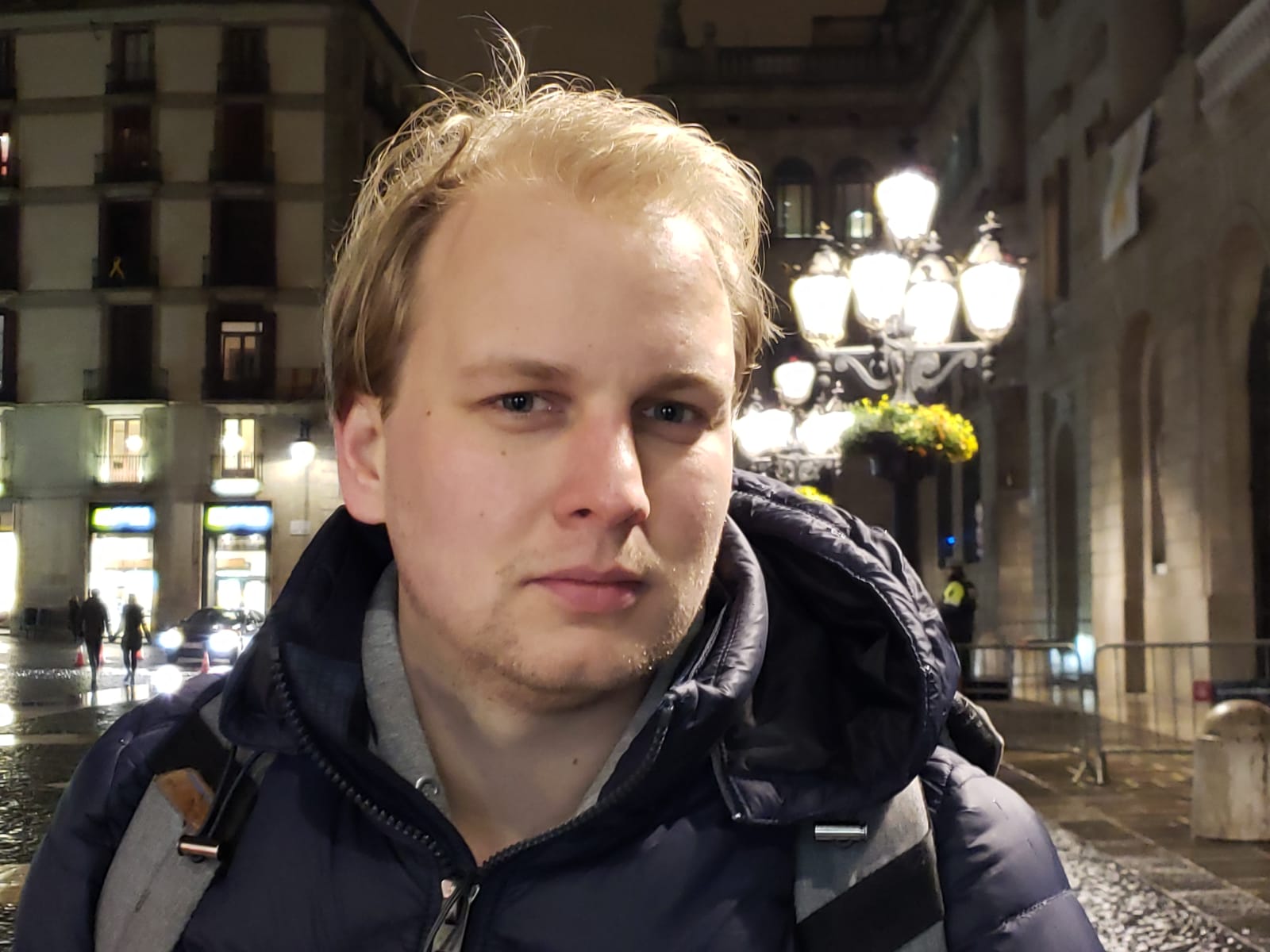 Another concern with shooting at f/1.5 is that focus might be softer for subjects that aren't close to the camera. But from our testing so far, the difference in clarity really isn't that noticeable. My shots of a cocktail glass in a dark bar appear almost as crisp in f/1.5 as in f/2.4, although you'll notice a bigger difference if you get super close to the subject. The good news is, if you know what you're doing and want to achieve a very shallow focus effect, you can. If not, you won't notice a significant difference in clarity between the two levels.

The S9 and S9+ use 12 images per shot to smooth out noise, and thanks to the built-in DRAM, are able to do so quickly. While we can't observe this in action, the results are evident. There are fewer color specks in general, compared to photos from an S8, and outlines of objects are crisp, which seems to indicate that the MFNR is working. The Dual Pixel autofocus also appears to be effective -- despite my hands shivering in the cold, there is little motion blur in the wide aperture shots.

Upon closer inspection, though, I noticed that edges of buildings appeared muddy in many shots. It looks like Samsung's processing software still introduces artifacts that are noticeable when you zoom in, but for your Instagram and Facebook uploads the photos will be more than adequate.

We still haven't pushed the S9+ very hard, or spent all that much time with it, so it's difficult to figure out any major issues and trends so far. What I can tell now is that the Dual Aperture feature really does make a difference. You're getting a whole two stops more to play with. All other things constant, images shot at f/1.5 are noticeably brighter than those at f/2.4.

Thanks to the telephoto and wide-angle lens pair on the S9+, you get features like Live Focus and Dual Capture, which snaps two pictures at once -- one up close and one further out. Live Focus helps you get pictures with a nice blurred background while retaining shallow depth of field, but so far appears to struggle in low light. Super slow-mo, which records video at 960 fps, also requires a fair amount of light to work well.

My footage of senior mobile editor Chris Velazco trying (very hard) and failing to catch a moving flower with his mouth in a dim restaurant is barely visible. That's not surprising, though -- at such a high frame rate, most cameras need a ton of light to capture anything decent.

Overall, the new low-light features seem effective but the results ultimately aren't extremely impressive. The extra large opening will come in handy especially in really dark scenarios, though, so night owls may reap better photo opps with this phone. Still, we'll be putting the S9s through their paces in a full review soon, so stay tuned to see if we learn anything different.