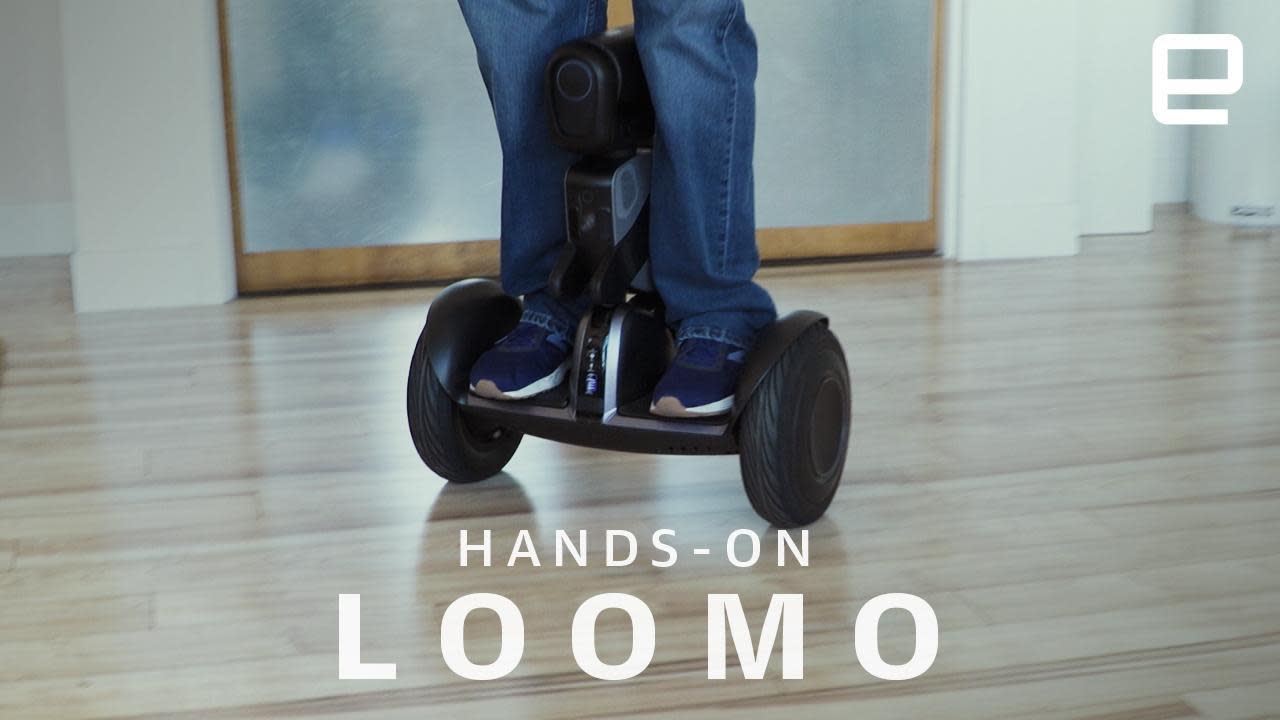 Hoverboards are ridiculous. They serve no purpose other than signaling that your laziness is only outpaced by your willingness to spend disposable income on fad gadgets. But if you insist on being piggybacked atop a rolling pedestal like a discount Paul Blart, you do you. Just know that it might as well be on one that also transforms into a robotic sidekick and carries your bags for you.

First revealed at CES 2016, the Segway Loomo is a $1,700 hoverboard. It operates much like those that came before it. You step onto the self-balancing platform, lean forward to accelerate, lean back to slow and reverse. But unlike its predecessors, turning the Loomo is done by pressing the knees against the unit's center, leaning left and right, which I found to be a far more intuitive method than lifting and pressing the footpads.

The Loomo is surprisingly stable, even when leaning back to stop quickly, though the company does insist that users wear a helmet while riding. It took me only around 10 minutes to get comfortable atop the device (and figure out the whole knee-turning thing). It has a top speed of 11 mph and a range of around 22 miles; its battery can be refilled using a standard outlet in about three hours. What's more, it can handle up to 15-degree inclines as well as some light off-roading across grass and soil, but you are going to want to avoid running it off curbs and down flights of stairs because, again, it's a 42-pound, $1,700 hoverboard.

But the Loomo isn't just for riding -- it's also a robot. Simply tap a button on top of the device and it will extend an emotive touchscreen face, converting from a hoverboard to a package-porting companion-bot.

Actually having it carry your bags can be a bit of a challenge. One can't simply hang a pack off the Loomo's back without upsetting its balance. The solution is to simply set the parcels on the unit's footpads. The Loomo can support up to 200 kg but there is precious little space for broad or wide boxes. There's no word yet on whether the trailer the company is offering as part of the Loomo Go program, which is designed to deliver packages through office buildings will be made available to regular customers as well.

Situated above its, erm, knee paddles, is an Intel RealSense ZR300 camera as well as a bevy of ultrasonic, infrared and touch sensors. The data they collect are fed into its Detection and Tracking System (DTS) and Human Understanding System (HUS). The DTS helps the Loomo detect and avoid obstacles while in robot mode, the HUS enables it to recognize its owner's face and track them through crowds.

You can also control the Loomo using voice commands or a smartphone app, leveraging the bot and its onboard 1080p camera to act like a remote-controlled security guard. It even offers a text-to-speech function so that you can communicate with whomever the Loom is looking at. But, again, you're going to want to keep it away from stairs, especially those leading toward any water features.

Our D.C. office building got a security robot. It drowned itself.

We were promised flying cars, instead we got suicidal robots. pic.twitter.com/rGLTAWZMjn

Unfortunately, both the voice command and facial-tracking features were rather unreliable during a demo. In a quiet room with three other people, the Loomo repeatedly lost track of me, locked onto someone else even though I was the one speaking to it and ignored my verbal commands half the time. We're talking sub-Siri levels of listening skills here.

That said, the company is actively working to not only improve the Loomo's auditory acuity but also expand the number of commands you can issue. There are fewer than six available commands, such as telling it to transform between riding and robot functions or instructing it to follow you. Those software improvements will be pushed out via OTA updates as they become available.

Segway is offering the Loomo through Indiegogo, with a discount for early adopters. Company reps told me the campaign is primarily designed to elicit user feedback and, once it ends, the units should begin shipping sometime around May.

I'm not entirely certain why anyone would think they need a hoverboard as a means of personal transportation to begin with, much less one that costs more than my first car did. That said, the Loomo Go program does sound rather exciting, should the company continue to improve its visual acuity and auditory responsiveness as promised, especially if the robots offer the option of carrying office workers across, say, expansive tech-company campuses -- akin to an automated personal shuttle bus -- while making its delivery rounds.

In this article: gear, hands-on, hoverboard, loomo, robots, segway, transportation
All products recommended by Engadget are selected by our editorial team, independent of our parent company. Some of our stories include affiliate links. If you buy something through one of these links, we may earn an affiliate commission.