They're the company's smartest screens yet.

Samsung practically stole the show at CES with its massive 146-inch MicroLED TV, The Wall. But that's not something most people will be able to afford. That's where the company's mainstay QLED 4K lineup comes in. At a media event in New York City today, Samsung unveiled its next generation of QLED TVs, which not only look better, but feature some genuinely useful improvements. They're an even better option for consumers who want to get rid of the typical cable clutter around their home theater, as well as those looking for smarter sets.

The biggest addition to the QLED lineup is Ambient Mode, a new feature that lets them blend into the background when they're off. If you've got a brick wall, for example, the TV will display the same pattern. It might seem superfluous, but it's a smart way to keep your set from just being a giant black mirror when it's off. You can also overlay information on top of the background, like the news and weather, as well as display artwork or family photos.

Ambient Mode relies on the SmartThings phone app to work. To set it up, you just have to take a photo of your QLED TV and the surrounding wall. After that, the set determines the best pattern to display, a process that takes around five seconds. Based on a few demos at the event, the feature is definitely intriguing, especially for people who wall-mount their sets. It's probably not enough to tempt shoppers away who care more about image quality, but it's useful for style conscious buyers. 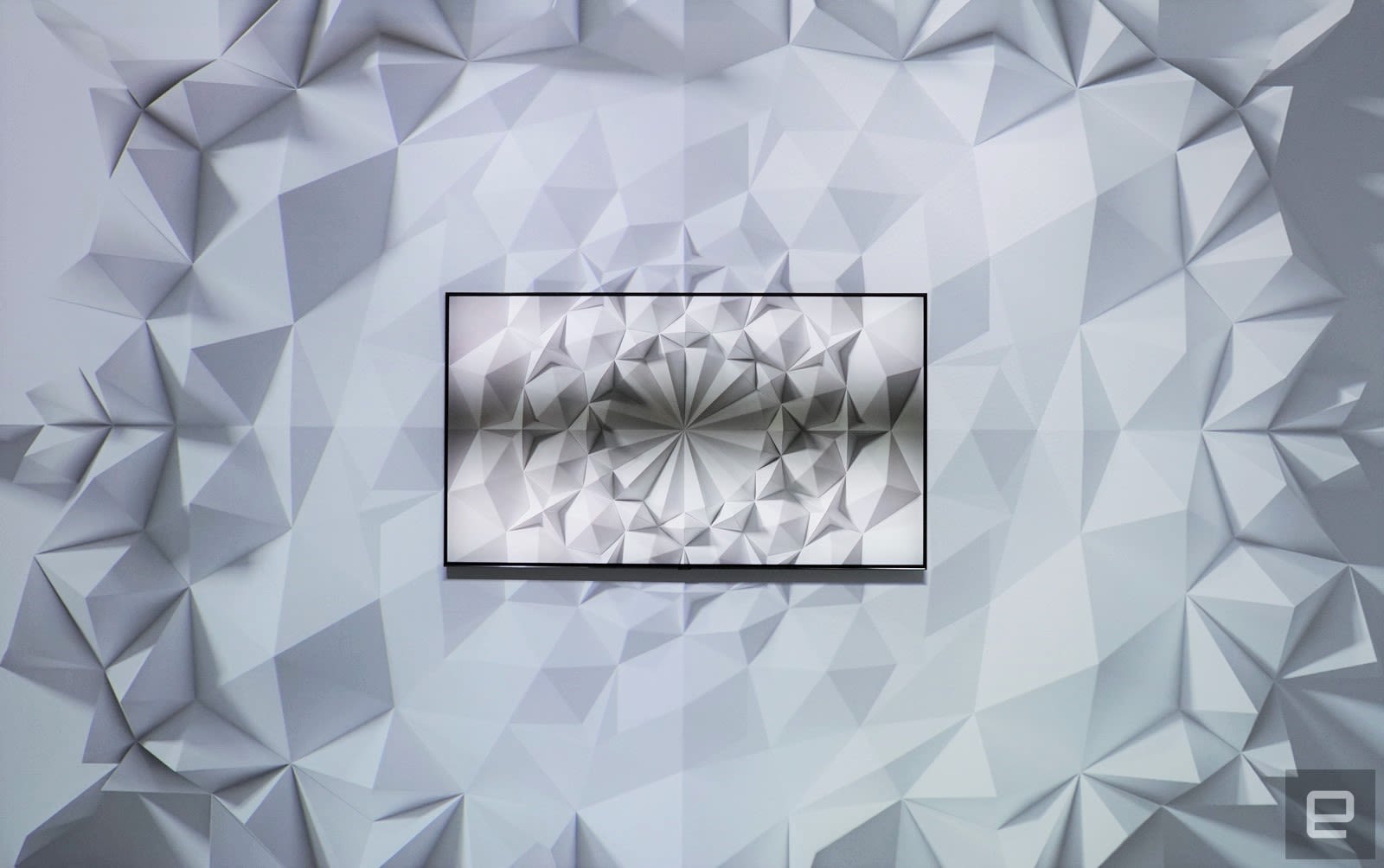 Samsung also improved its single cable solution on its Q7F and Q9F models. Just like last year, it's a single optical fiber wire that connects to a separate box that houses all of your typical inputs. This time, though, that cable also carries power. Samsung had to make it a bit thicker to make that happen, but it seems like a worthy trade-off. Having to run power separately kind of defeated the purpose of the company's single-cable vision. The TVs come with a 5 meter cable, but you can also order a 15 meter version separately. 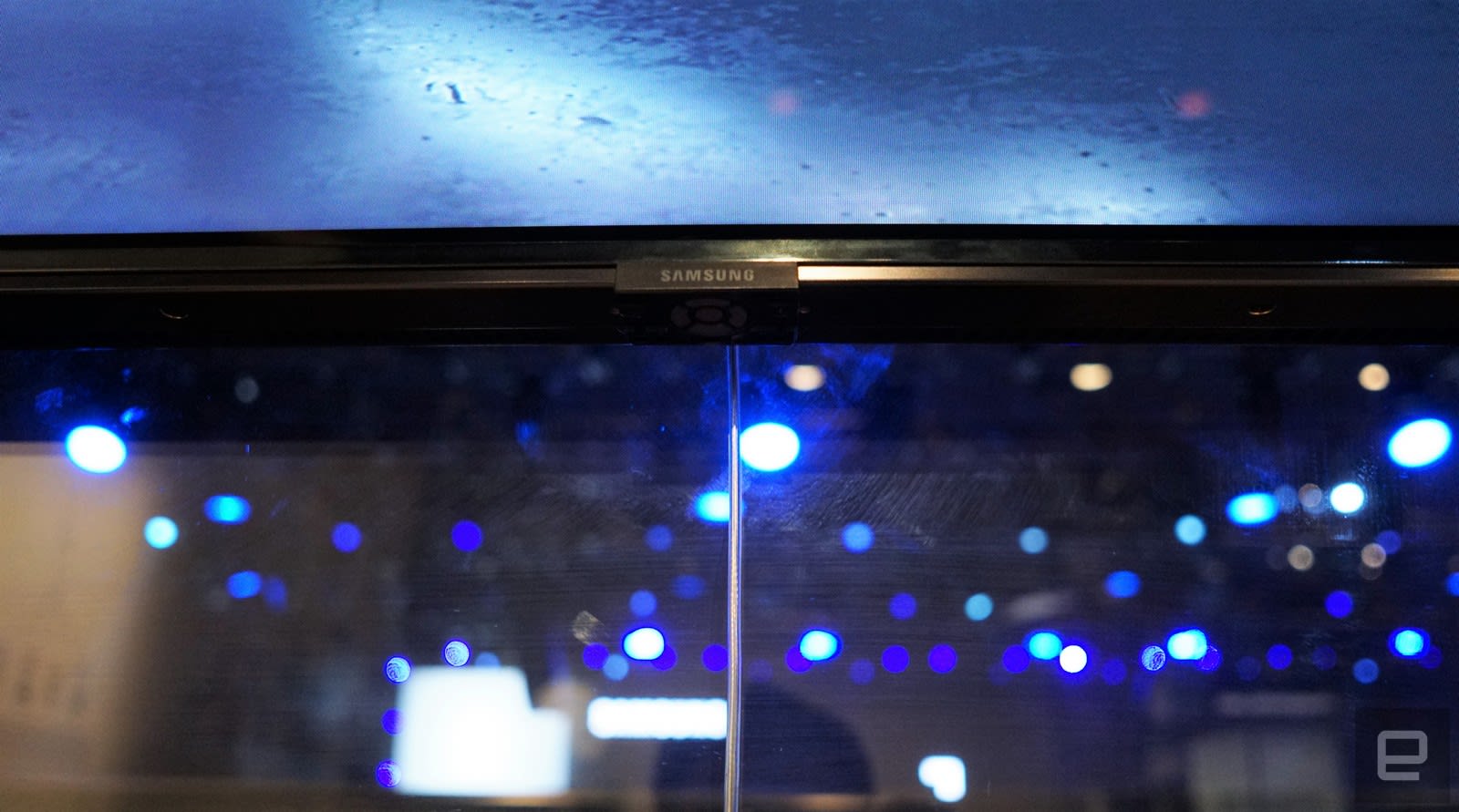 As you'd expect, Samsung is also making the QLED TVs smarter with Bixby integration. It replaces S-Voice, the company's middling voice interface, and lets you search for content across TV and streaming services (no Netflix yet, though). Bixby isn't as advanced as its mobile sibling, but it's a first step towards unifying the company's platforms. With SmartThings support, you'll also be able to control compatible smart devices right from your TV. That's especially useful for things like smart cameras, since they can show up on your screen.

And of course, there are plenty of image improvements in the new QLED TVs. Most notably, Samsung added Direct Full Array backlighting to the Q8F and Q9F. That'll let the TVs handle contrast and black levels better than the company's edge-lit displays. Vizio has offerrd full-array backlighting in its TVs for years, which notably cost much less than Samsung's. It's about time the Korean electronics giant caught up.

From what I could tell, the QLED sets all looked better than last year's models. The improved backlighting was easily noticeable on the higher-end models, though I wish Samsung was able to deploy it across the entire lineup. The Q6F and Q7F still rely on edge backlighting. As a tradeoff, those sets are a bit slimmer.

It's strange to think that Samsung's most exciting new feature shows up when their TVs are off. That's not exactly a put-down, though, since background blending isn't something anyone else is offering yet. Beyond that, it looks like Samsung has an interesting year in home entertainment ahead. The Wall will be available sometime in August, and these QLED sets will start rolling out later this month.