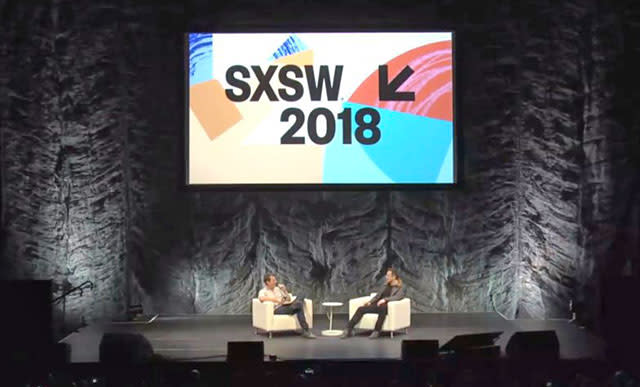 SXSW plays host to big-name speakers all the time. Mother! and Black Swan director Darren Aronofsky was on stage yesterday, Apple's Eddy Cue is on a panel tomorrow and Moonlight director Barry Jenkins had a keynote this morning. But something felt different at the Moody Theater in downtown Austin. The crowd was unusually excited, expectant. A thousand or so SXSW attendees, a large number of them press, had congregated, after getting only 12 hours' notice, to hear Tesla and SpaceX founder Elon Musk speak.

The panel was scheduled for noon, but at 12:15 PM people were still shuffling in. Either Musk was running late or officials were stalling to let the audience take their seats. A small group in the venue's upper tier began clapping, as though calling for an encore after a concert, and the rhythmic applause swiftly pulsed around the theater, to no avail.

Minutes later, the easy-listening instrumental track being piped through the theater died down. A whoop from somewhere in the venue sparked some excited chatter. A journalist sitting in front of me asked her neighbor, "Is that him at the side there?" (It wasn't.) Someone started chanting, "Elon, Elon, Elon," and it briefly caught on before dissolving into an insecure giggle as the next jam faded in.

By the time SXSW director Hugh Forrest took the stage, around half an hour behind schedule, excitement was at fever pitch. After selling the audience on some SXSW merch, Forrest sang Musk's praises, describing his speaker as a visionary, throwing in a couple of conference-appropriate jokes ("He's founded a couple of successful startups," etc.) that the audience lapped up.

Musk emerged to rapturous applause -- off the scale for a tech event. It felt like a film premiere -- the fervor somewhere between James Cameron's Avatar preamble (a solid 9/10) and Quentin Tarantino's profanity-laden mic drop before the London debut of Inglourious Basterds (literally the most hyped I have ever seen a crowd).

The Q+A session used an AMA-inspired system -- anyone in the venue could submit a question via an online form, and then vote on other people's submissions. This populist approach, when combined with the extreme levels of Musk fandom in the venue, led to a lot of softball questions: a cut above "Describe your dream date," but not by much. Moderator Jonathan Nolan (in town promoting Westworld season 2) set the tone early, bringing another round of applause by saying, "We are going to the moon, we are going to Mars, and it's down to you." The panel then started in earnest, with a question asking "how can we help" Musk get to Mars, to which the answer was, not surprisingly, that you can't really.

"Right now the biggest thing that would be helpful is support and encouragement, goodwill," Musk said. SpaceX is making good progress with its "BFR" rocket, and should be ready to do some small "up-and-down" tests next year. Once it's able to demonstrate that the feat is feasible, then interest will build, Musk said. "We'll have a point of proof," he continued, "something that other companies and countries can then go and do." Then entrepreneurs will race to build out infrastructure, he added, looking to get rich from the new frontier.

A famously poor orator, Musk lost his way often, pausing for long moments, sometimes changing topic midway through a sentence. But that trademark mumbling style only heightened the anticipation among the audience. There's a cult of personality built around Musk and his companies, and this was his temple. At every "um," those captivated by Musk only leaned in closer, as though the sentence that began "Getting the spaceship built" was going to end with a revelatory, life-changing message.

Musk is perhaps at his best when discussing big-picture topics. When the conversation inevitably moved toward the dangers of AI, his tone switched, and the pauses, while still frequent, were shorter. AI experts, Musk said, "think they know more than they do" and "don't like the idea that a machine can be way smarter than them, so they discount the idea." He pointed, as he has before, to the exponential growth of computer intelligence in recent years, noting that while current, narrow AI uses don't pose a threat to anything more than a few jobs, an all-purpose "superintelligence" would be a threat to civilization itself. "Yeah ... yeah!" a voice from the audience chimed in agreement.

"I'm not really an advocate of regulation and oversight, but this is a case where you have a very serious danger to the public. There needs to be a public body that has insight and oversight to confirm that everyone is developing AI safely," Musk said as a dozen or so heads around me nodded in unison. "The danger of AI is much greater than the danger of nuclear warheads. Mark my words: AI is far more dangerous than nukes. Why do we have no regulatory oversight? It's insane."

The further off the sci-fi deep end the talk went, the more the audience lapped it up. Martian colonies are a necessity before a World War III–induced dark age breaks out, Musk said, to apparently not a single raised eyebrow. After a quick "Emperor of Mars" joke, Musk then proposed a direct democracy, where new laws are created with a 60 percent consensus, and old laws can be killed with 40 percent agreement. He also believes a sunset provision would be a valuable part of a Martian constitution, meaning laws would automatically expire unless there was interest in keeping them around.

These weren't the only political moments of the Q+A. Over the 80-minute running time, Musk also covered the need for a carbon tax ("CO2 has a great cost, but economically zero cost ... In the absence of that price, we pretend that there's no cost") and his hatred of overregulation ("It's like Gulliver, trapped by tiny strings: he can't move ... hardening the arteries of civilization with rules and rules and rules").

It's difficult to see libertarian views being so readily accepted from anyone else at SXSW, but Musk can do no wrong. He's a businessman, which in America is enough to earn adulation by itself. For all the talk of Mark Zuckerberg's political influence, Musk's sway over society seems stronger. But he's more preacher than politician, and today, SXSW was his church.

In this article: elonmusk, gadgetry, gadgets, robots, space, spacex, sxsw, sxsw2018, tesla, TheBoringCompany, tomorrow, transportation
All products recommended by Engadget are selected by our editorial team, independent of our parent company. Some of our stories include affiliate links. If you buy something through one of these links, we may earn an affiliate commission.