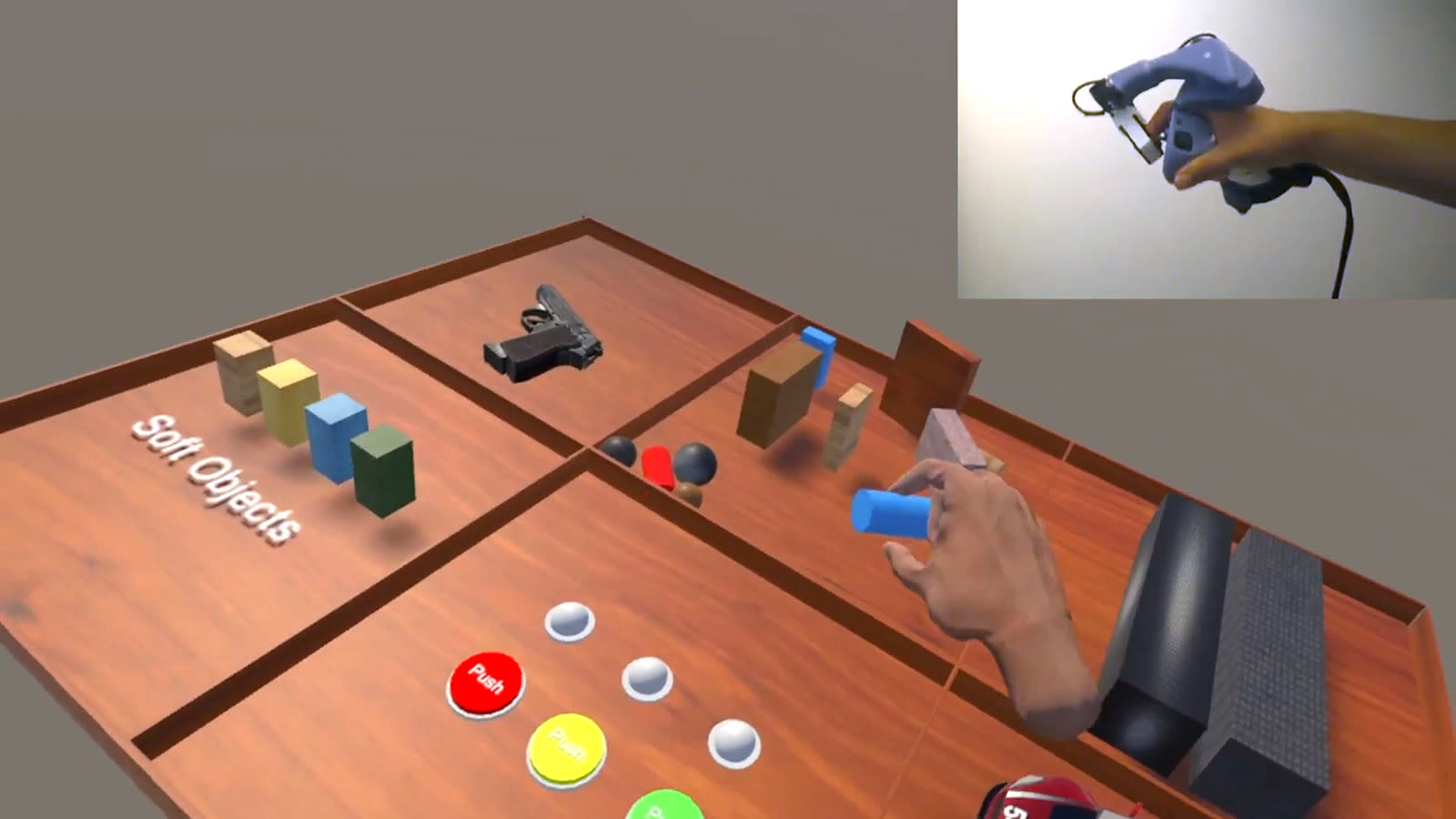 Unless you hate fun, Microsoft's best division is far and away its Research group, which has given us the nearest thing to a Holodeck, a live-action version of Minecraft and much more. Microsoft's gang of crazy researchers is at it again, showing off a bunch of new controllers for augmented and virtual reality. They're strictly experimental for now, but show a lot of potential for making AR and VR more fun and useful.

The most versatile controller is called "The Claw" (below). It's a squeezable, gun-like device that let's you pick up and handle virtual objects and, thanks to haptic feedback, feel their softness and texture. It can even detect the differences between users' grips and the "situational context of the virtual scene," as Microsoft puts it.

In other words, depending on how you hold The Claw, it will deliver touch sensations, resistance that prevents you from penetrating virtual objects, or small vibrations to simulate textures. It does that thanks to a motorized arm connected to the controls on your trigger finger, and a voice-coil to generate the vibrations.

"Haptic Links," meanwhile, is a two-handed controller that can simulate experiences you do with, well, two hands. That includes banal tasks like carrying boxes or operating a hammer drill, to more highly-skilled activities like playing the trombone or maracas.

Haptic Links "dynamically alter[s] the forces perceived between the user's hands to support rendering of a variety of two-handed objects and interactions," Microsoft said. The team created three separate versions that control tension and degrees of freedom: a layer hinge, chain, and ratchet-hinge, each of which works best for different types of simulations.

Lastly, Microsoft showed off the "Canetroller," a simulated cane for the blind. When you sweep it around a simulated world, it stops when it hits objects, thanks to a wearable, programmable brake. Via vibrotactile feedback, it vibrates when you sweep it across the ground, just like a cane in the real world. Both sensations are enhanced by auditory feedback that simulates the sound of a cane in the real world.

Much like audio descriptions help the blind follow TV shows, movies or smartphone content, a device like the Canetroller could help the blind and low-vision users navigate virtual worlds. "'Conventional' virtual reality experiences are heavily visual in nature and not accessible to the vision impaired," said Microsoft. "Microsoft Research hopes its work can inspire researchers and designers to design more effective tools to make VR more inclusive to differently-abled people all over the world."

In this article: AR, AugmentedReality, Controllers, gaming, gear, Haptic, microsoft, MicrosoftResearch, VirtualReality, VR, wearables
All products recommended by Engadget are selected by our editorial team, independent of our parent company. Some of our stories include affiliate links. If you buy something through one of these links, we may earn an affiliate commission.