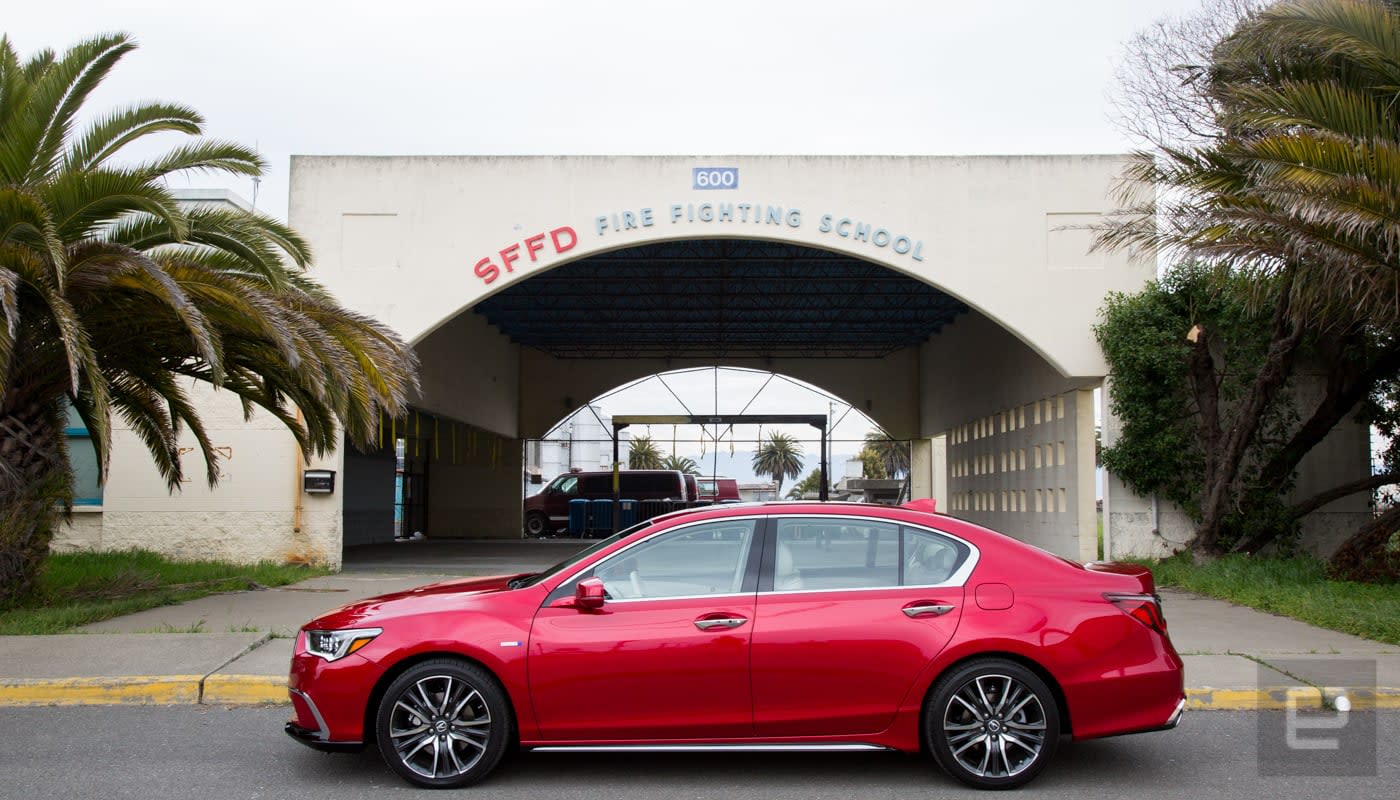 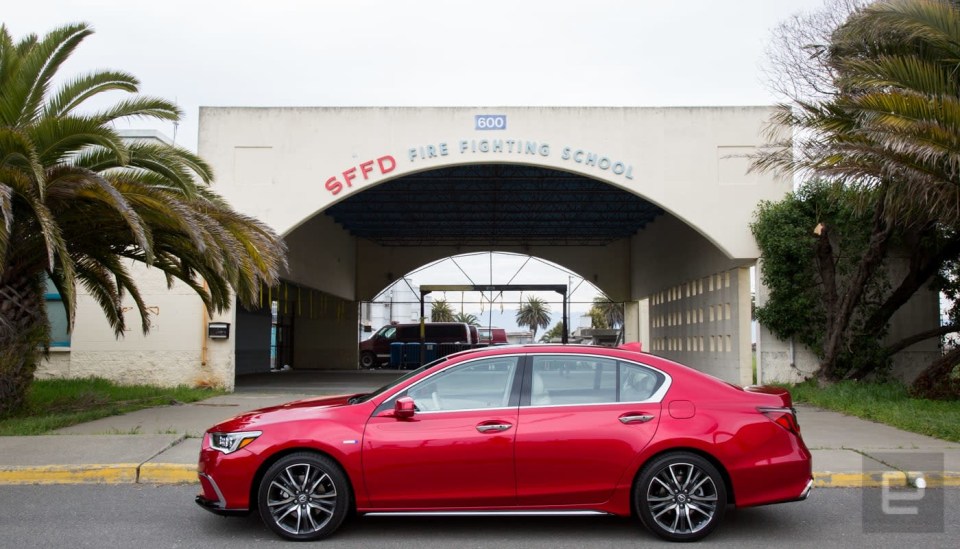 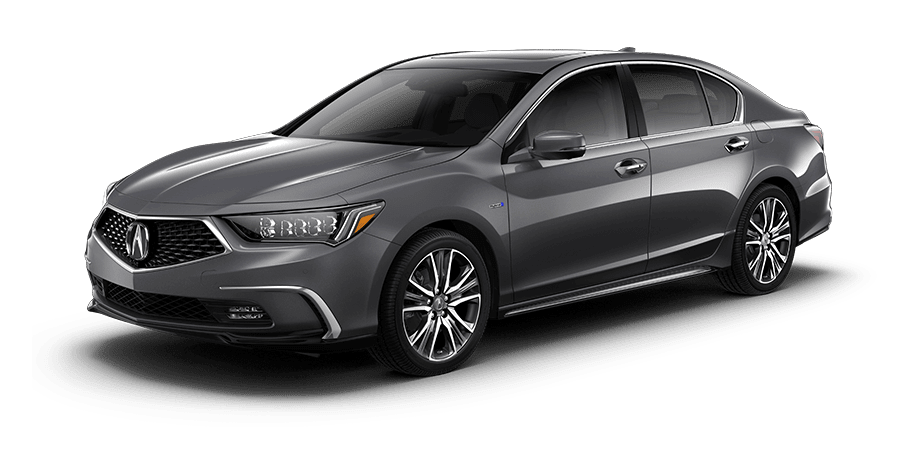 Luxury cars need more than a smooth ride to appease drivers. When dropping $50,000 (or more) on a vehicle, people want something that glides but can also quicken the pulse. Audi, BMW, Mercedes and even Cadillac are delivering on all of those fronts. Now with the RLX Sport Hybrid (starting at $61,900), Acura is getting close too. The Acura RLX Sport Hybrid is an AWD vehicle that’ll pamper you while being surprisingly nimble. Unfortunately the infotainment system feels outdated and doesn’t support Android Auto or CarPlay.

Be the first to review the RLX (2018)?
Your ratings help us make the buyer’s guide better for everyone.
Write a review

The top-of-the-line Acura sedan takes cues from the automaker's NSX supercar. Make no mistake, these are two different cars, and the chances of seeing an RLX drifting around a corner during a track day are pretty much nil. But what the car lacks in pole-position cred it makes up for in solid AWD (all-wheel drive) handling, comfortable accommodations and aggressive styling. Unfortunately, the infotainment system doesn't live up to the rest of the car.

At its core, though, the RLX has all the attributes of a luxury car: a smooth ride that all but eliminates rough roads, a quiet cabin that forces you to open the window if you want to actually hear the engine and steering that has a casual relationship with the road. During my drives in San Francisco's city streets and on the highway, I half expected the inclusion of an AWD system to be wasted. What's the point of added cornering prowess if the car is going to float all over the road? Then I hit the mountains and pressed the Sport button.

In the switchbacks near Muir Woods, the RLX surprised me with its ability to stick to a line around tight corners. Yes, there was body roll but nothing near what I expected. On twisty roads, it's almost like two cars: an interior that reminds you where all your money went and an AWD system that's up to the task of keeping the wheels planted onto the asphalt.

That impressive cornering has a lot to do with parent company Honda's Super Handling All-Wheel Drive (SH-AWD). It might be a feature that sounds like it was coined by an eight-year-old, but the tech behind it (especially in the RLX hybrid) makes a potentially boring car almost exciting to drive in the mountains. The system dynamically sends torque to the wheels to adjust for a corner. At a basic level, it pushes more torque to the outside wheels during a turn. On the RLX the electric motors are used to deliver that extra power. Unfortunately, that power never translates into thrilling forward motion.

The RLX's combined power output of 377 horsepower and 341 pounds of torque feels adequate. It's not slow by any means and I had zero issues getting up to highway speeds from a dead stop, but still: It lacks pizzazz. When I stomped on the accelerator, I wanted more.

During my quest for a faster car, the seven-speed dual-clutch transmission worked great on the highway. But during spirited driving I'd recommend switching to the paddle shifters to keep your momentum up.

Because the RLX only has a normal driving mode and Sport, you don't get a lot of control over the hybrid system. Many hybrids on the road today are giving drivers a plethora of options to fine-tune their gas versus electric driving. The RLX, not so much, but after a day I was fine with it. Sometimes you just want the car to figure it out, and the RLX does that with aplomb.

It also does a fine job pampering its occupants. The seats are plush and comfortable. Long hours in the car melted away with nary an ache or pain while the headrest felt more like a pillow than protection against whiplash (it's still protection against whiplash). All four seats have adequate legroom and warmers so that driving home after a day on the slopes is an opportunity to raise your core temperature via your butt.

While the car is great at making your rear end feel cushy, its infotainment system is disappointing. With a dated color scheme and design that reminded me of the Windows BIOS screen, it feels out of place in a car with this many amenities. It's like putting a Compaq computer into a smartly furnished apartment. The information it shares about the vehicle's efficiency feels cluttered, and the media player looks more like Real Player than anything else on the market right now. Navigating the system is a chore, and it doesn't get better when you talk to the car.

The voice control is also frustrating -- it forces you to follow a script with multiple choices. It made me pine for the natural voice control found in other cars, smartphones and smart speakers. To make matters worse, the car does not support Android Auto or CarPlay.

But if you can get past the infotainment shortfalls and you're not expecting too much based on the "Sport" moniker, Acura's sport sedan makes for a comfortable cruiser. Thanks to Honda's stellar SH-AWD, the car will pleasantly surprise you in corners. Plus will likely to give you peace of mind in inclement weather.

In this article: Acura, design, gadgetry, gadgets, gear, hybrid, review, RLX, rlxhybridsport, transportation
All products recommended by Engadget are selected by our editorial team, independent of our parent company. Some of our stories include affiliate links. If you buy something through one of these links, we may earn an affiliate commission.