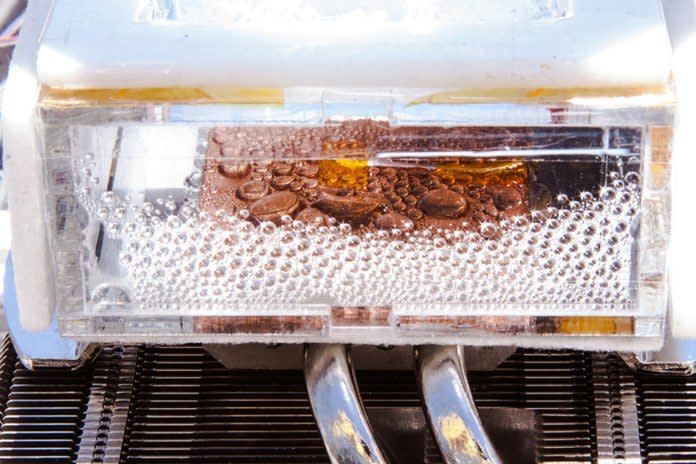 Researchers at MIT and UC Berkeley have developed and now tested a device that can extract water out of the air even in the driest of climates. The team proposed the device in a Science article last year and now they've improved the design and tried it out in Tempe, Arizona. While there are a few ways to pull water out of the air, most come with significant limitations. They usually require humidities upwards of 50 percent and some need a lot of energy input to make them work. The research team's latest design, however, works passively, without the need for energy input, and can work in places with humidity as low as 10 percent.

The core of the design is a material called a metal-organic framework, or MOF. It's made up of linked molecules that create a super porous material with lots of surface area. And depending on what you make the MOF with, it can be very hydrophilic, meaning it attracts water. See the video below for more on this type of material. The MOF used here is able to pull water from the air and store it in its pores, which it does during the night. Then come daytime, sunlight is used to release the water and a condenser is used to harvest it. The system is completely passive and the research team showed it can work even in the arid Arizona climate.

Tested over five daily cycles in May 2017, the water output was estimated to be around a quarter of a liter per kilogram of MOF. Additionally, the team tested the water for impurities and found that the MOF wasn't leaching into it. Next, the researchers want to scale up the system and make it more efficient. "We hope to have a system that's able to produce liters of water," Evelyn Wang, who led the research, said in a statement.

The work was published today in Nature Communications.

In this article: desert, gadgetry, gadgets, gear, research, video, water, waterextraction, waterharvesting
All products recommended by Engadget are selected by our editorial team, independent of our parent company. Some of our stories include affiliate links. If you buy something through one of these links, we may earn an affiliate commission.