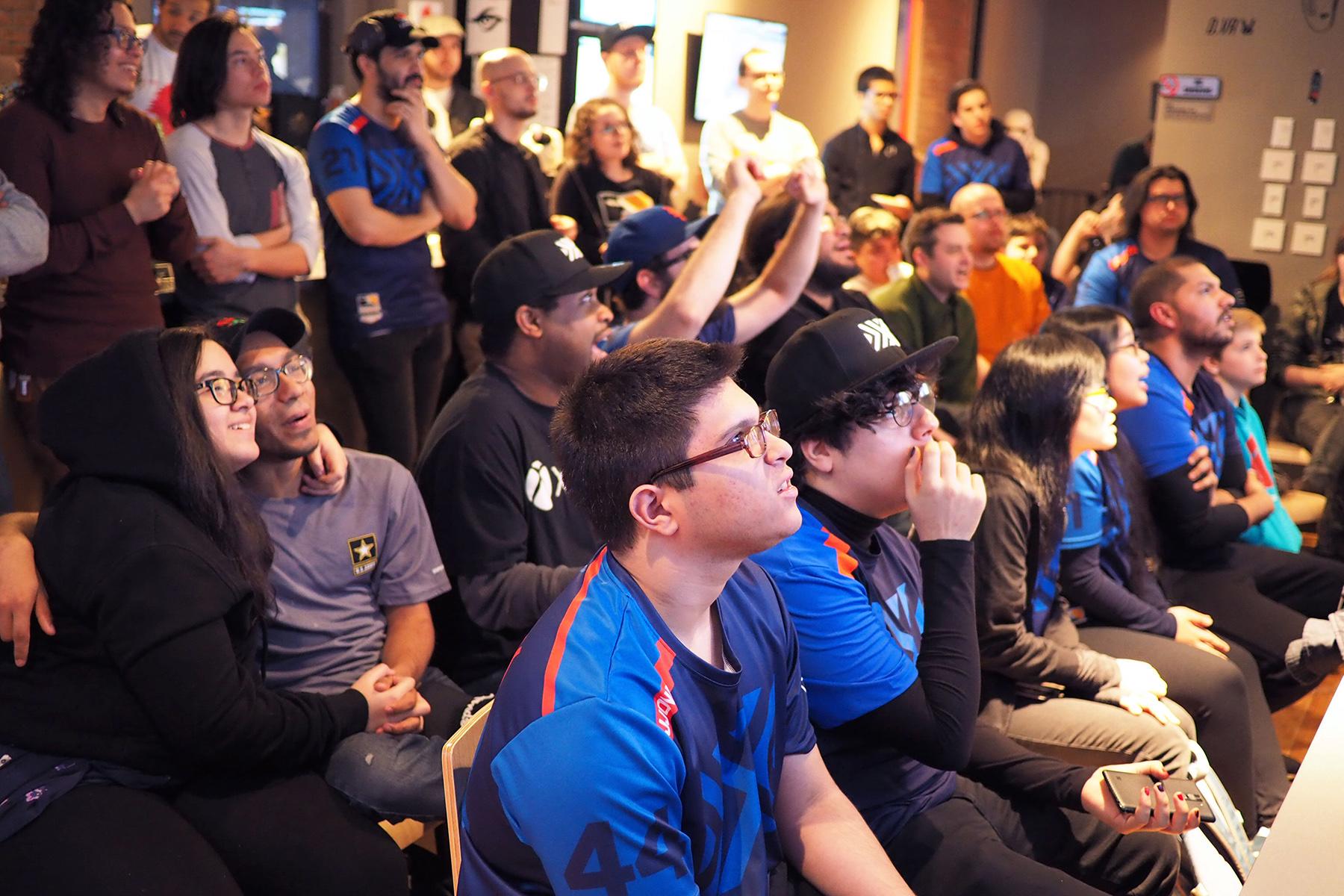 Richard Ng didn't plan it this way, but he might just be standing at the forefront of an eSports revolution.

The 38-year-old brand strategist finds himself moonlighting as the founder of the Five Deadly Venoms Crew, a supporters club for Overwatch League's New York Excelsior team. What started as a simple Discord request to meet up with nearby eSports fans has quickly grown into a local phenomenon, hosting weekly, standing-room-only viewing parties at Waypoint, a cozy LAN café on the Lower East Side.

This past weekend's event had more than 70 attendees -- a lively, exuberant crowd that found plenty of reason to cheer as NYC routed the Los Angeles Valiant 4-0.

"There were no lofty aspirations at first," said Ng, as he recalled the group's humble beginnings. "We had 15 people come out for the first one, and it just snowballed from there."

The crew needed a name, and Ng immediately thought of Five Deadly Venoms, lifted from a classic Kung-Fu movie and representing the five boroughs of NYC (with a wink and a nod to both Wu-Tang Clan and Waypoint's proximity to Chinatown).

A Toronto native who has lived in New York for about five years, Ng was familiar with the concept of supporters clubs, which are common throughout the world -- especially in big cities like New York -- for European sports. In fact, soccer teams often rely on these groups to provide grassroots, organic marketing, and Blizzard's emphasis on city-based teams made OWL a perfect fit for this model.

"Quite frankly, city squads have made eSports easier to talk about," Ng said. "The product is the same as other eSports, but there's an ease in being able to have something in common with other fans, to all unite and cheer on our city. That's the beauty of all this."

Indeed, OWL's emphasis on city squads has created fans that are more in line with those found in traditional sports. For example: New Yorkers love Eli Manning and Odell Beckham Jr. even though neither of them hail from New York. Similarly, none of Excelsior's players are from NYC (in fact, they're all from South Korea), yet fans have a reason to cheer for them. Like traditional sports fans, they're rooting for the name on the front of the jersey, not the back, something not typically seen in eSports.

"This might surprise you, but I must confess: I have never played Overwatch."

Take, for example, Alex Nagler, a 29-year-old media strategist from Manhattan who proudly wore a New York Mets sweater at this past weekend's viewing party. He was quick to point out that Jeff Wilpon, the CEO of the Mets, also owns Excelsior, which is what first piqued Nagler's interest.

"This might surprise you," he told me, "but I must confess: I have never played Overwatch." Despite a lack of familiarity with the game, Nagler enjoys the excitement of watching it live with fellow fans, not to mention the Mets connection. "Every major American sport will be involved in this industry very soon," he added. "I'm just curious to watch the eSports space grow, and this is a fun environment."

Arina Wu, a graduate student at Columbia University, never expected to find a supportive, real-world community through eSports. During this past weekend's viewing party, she greeted guests at the front door, smiling ear to ear while rocking her favorite Excelsior replica jersey.

"Overwatch League has a very different kind of fan base than other eSports," she explained. "The game attracts younger fans, females, non-binary, the queer community -- it's so inclusive. And with the supporters crew, it's like I've gained a whole new family."

And then there's Johann Maldonado, one of the youngest members of the crew. Although he's only 12 years old, Maldonado has a lot in common with his fellow Excelsior fans -- and his excitement was palpable.

"I feel right at home here," he said as he enthusiastically flashed a D.Va-inspired V sign, his uncle smiling behind him. "Overwatch is my first eSport," he continued, "and I just knew I had to come here when I found out there was a New York team. We're all here showing our hometown pride."

Stories like these must be music to Blizzard's ears. The company took a risk, and raised some eyebrows, when it decided to model OWL on traditional sports, complete with city-based teams. But only three months into its inaugural season, OWL boasts above-average Twitch ratings (even beating NA LCS in average concurrent viewers for the first time in late February) and -- if the Five Deadly Venoms Crew is any indication -- has attracted a broader audience than its competitors.

This shouldn't come as a total shock. After all, studies have shown that more than twice the number of women play Overwatch than any other FPS, and Nielsen found last year that one of Overwatch's main competitors, Counter-Strike: Global Offensive, has a 90% male fan base.

But the city affiliations can't be overlooked. While other eSports teams have their fair share of adoring fans -- LoL's SK Telecom T1 or Dota2's Team Liquid, for example -- they're scattered across the world with no central location to unite them. As Ng argues, those fan bases can't build the same type of grassroots, word-of-mouth community as a location-based supporters club.

"Rooting for those teams makes me feel like I'm rooting for a massive, conglomerate corporation," Ng told me. "But cheering for your neighborhood, for your city, touches on a basic level of human pride that extends back generations."

There are more OWL supporter groups popping up throughout the country, with up-and-coming crews in Philadelphia, Miami and other locations. Ng has been in touch with these groups, lending his support and offering advice, even setting up a charity game against the Houston crew set for mid April. It's all done in a spirit of friendship, camaraderie and philanthropy, with the groups hoping to give back to the communities in which they reside.

And what does the future hold for the Five Deadly Venoms? The crew hopes to expand its core members, perhaps even open up multiple viewing locations and grow alongside the league. Currently, all OWL matches are played in Los Angeles, but it will expand to a home-away format, a change rumored to be coming by 2020 latest. The supporters club is excited, with members already discussing how great it would be to pack Madison Square Garden or travel to other cities for road-game invasions.

As this past weekend's match against LA came to a dramatic conclusion, with rip tires blaring and last-second triple kills securing the victory, the packed crowd at Waypoint erupted in wild cheers and applause, a "Go New York, Go New York, Go!" chant rising from the back rows. If you didn't know any better, you'd have thought Aaron Judge had just smacked a grand slam at Yankee Stadium.

"Remember how the knock on online gamers used to be: But they're not your real friends?" he asked. "Well, look at us now" -- he pointed at the crowd -- "because these friends are real, and it's amazing."

In this article: av, entertainment, gaming, gear, longread
All products recommended by Engadget are selected by our editorial team, independent of our parent company. Some of our stories include affiliate links. If you buy something through one of these links, we may earn an affiliate commission.