Dell G will also serve as its new gaming branding.

Dell's spring PC lineup is focused on all in one machines, as well as a refresh of its Inspiron gaming laptops, now known as the Dell G Series. And of course, there are also a few Alienware laptop upgrades coming too. The company's latest batch of all in ones might be compelling enough to tempt away people who are used to a traditional desktop and monitor setup. And gamers will probably appreciate having a wider variety of inexpensive machines to choose from.

The new Inspiron 24 5000 all-in-one features a 23.8-inch 1080p screen, while the Inspiron 27 7000 has 1080p and 4K options for its 27-inch display. The latter model also features HDR support on its higher-end screens, but it's not nearly as bright as an HDR TV. Both computers build on Dell's XPS laptop aesthetic, with simple lines, metallic cases and near bezel-less screens.

They're powered by 8th generation Intel Core processors, as you'd expect, and up to 32GB of RAM. You can also upgrade their graphics with NVIDIA GTX 1050 GPUs, which is powerful enough to play most modern games in 1080p. The new AiOs also feature pop-up webcams, which can be hidden for privacy easily. That's a far better solution than putting the cameras below the displays, like with Dell's last models. You can snag the Inspiron 24 5000 AiO today starting at $850, while the 27 7000 AiO will run you at least $1,000 when it launches in late May.

As for the new Dell G family, they're an evolution of the popular Inspiron 7000 Gaming series, which packed in a decent amount of power at a relatively low cost. The G branding just differentiates these new machines from the rest of the company's mainstream lineup. They're not exactly flashy, yet they're sharp enough to distinguish themselves from a standard Inspiron. 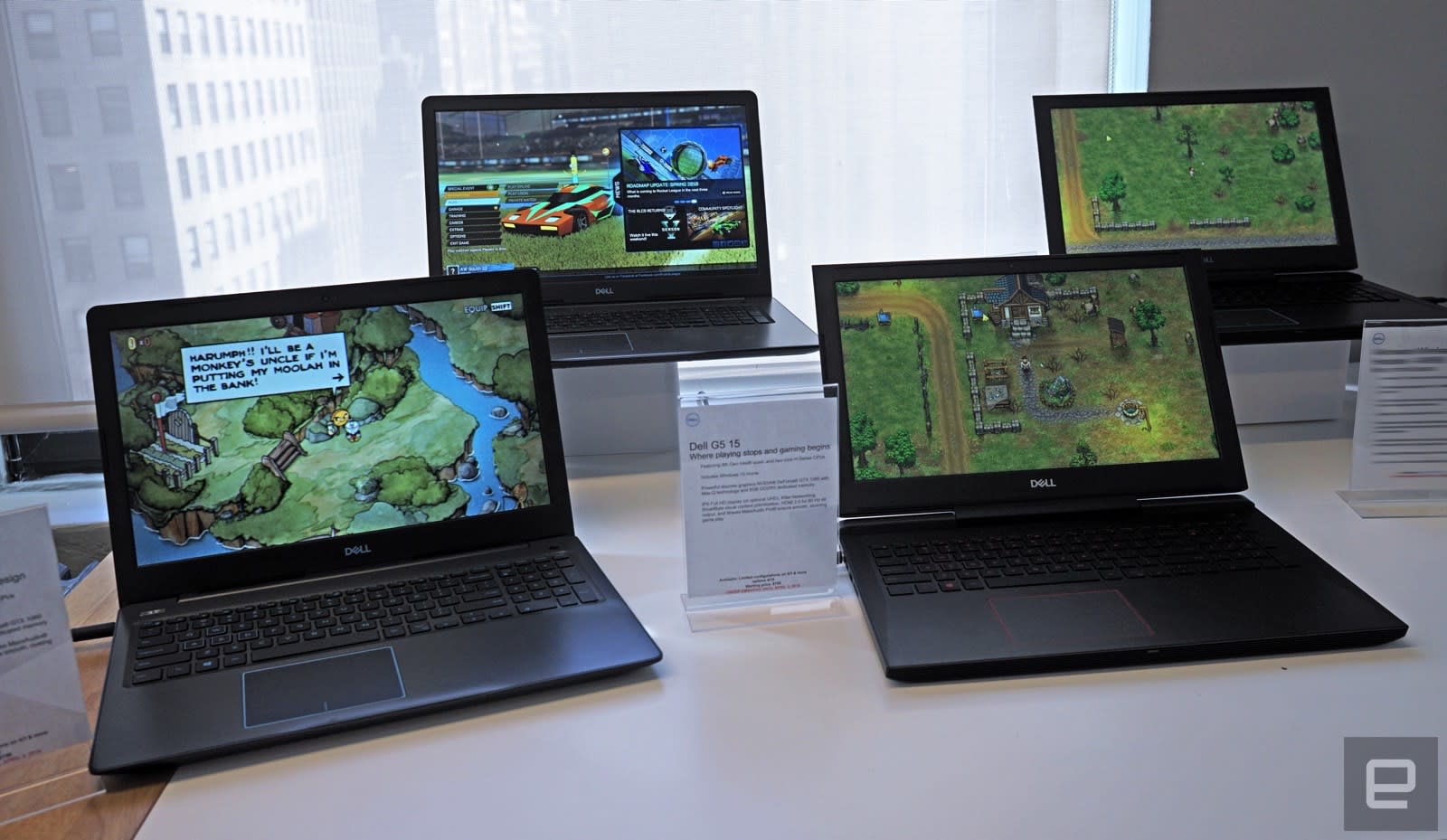 The Dell G3 15 and 17 are its entry-level 15-inch and 17-inch models, featuring 8th Gen Intel processors and NVIDIA's GTX 1060 Max-Q GPU. They're limited to 1080p screens, but they also have the advantage of being the slimmest of the new lineup. If you're looking for a bit more power, there's the G5 15, which supports up to quad and six-core Intel i7 processors. Rounding things out is the G7 15, which fits in Intel's new Core i9 quad-core and six-core CPUs. It's one of the first laptops to support that processor, and it should be a compelling option for gamers who plan to stream and edit media.

While both the G5 and G7 are also powered by NVIDIA's GTX 1060 Max-Q, they have more elaborate cooling than the lower end models. That should be helpful for lengthy gaming sessions -- you don't want your machine overheating in the middle of a Twitch stream, after all. You can also opt for 4K displays on the G5 and G7, and they feature HDMI 2.0 for putting that 4K feed on a bigger screen.

Dell hasn't forgotten about its Alienware series either. The new Alienware 15 and 17 can be configured with Core i9 K series CPUs, which are unlocked for overclocking. And, as you'd expect, you can opt for the most powerful graphics options around, like an overclocked NVIDIA GTX 1080 GPU. They also come in 1080p and 4K options, and you can also spring for NVIDIA's G SYNC technology, which smooths out gameplay. The Alienware 15 starts at $1,400, while the 17 goes for $1,550. All of the gaming machines are available today, but more configurations are coming on April 16th.

While there's no real standout, these announcements show that Dell is doubling down on increasingly popular markets. All-in-ones are more compelling now, since traditional desktops are all but dead. And with the rise of more powerful, but portable hardware, gaming laptops have never been more tempting.