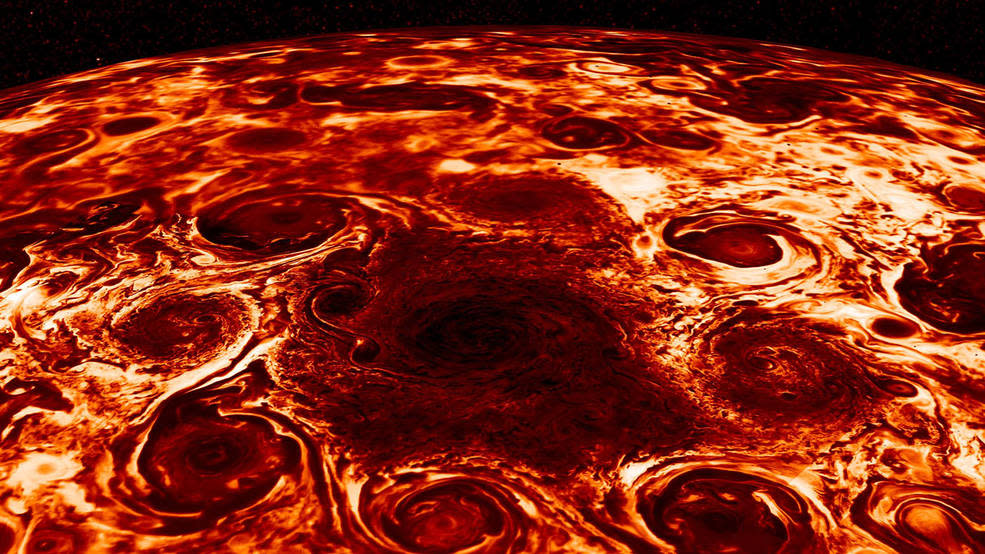 If nothing else, the spacecraft Juno, which is currently in an elongated orbit of Jupiter, has taught us that the largest planet in our solar system is weird. From spectacular photographs to readings that make us question what this giant even is, Juno has done a spectacular job uncovering the gas giant's mysteries. Now, NASA has released a 3D infrared movie of Jupiter's north polar region, depicting the intense storms in the area, as well as the dynamo that powers the planet's massive magnetic field.

Scientists used the spacecraft's Jovian InfraRed Auroral Mapper (JIRAM), which is able to capture light from deep inside Jupiter regardless of the time of day, to create this video. It is able to penetrate 30 to 45 miles below the planet's cloud tops. Thanks to Juno and its instruments, scientists are finally uncovering the secrets behind the forces that power Jupiter's magnetic field.

"We're finding that Jupiter's magnetic field is unlike anything previously imagined," said Jack Connerney of the Space Research Corporation. "Juno's investigations of the magnetic environment at Jupiter represent the beginning of a new era in the studies of planetary dynamos."