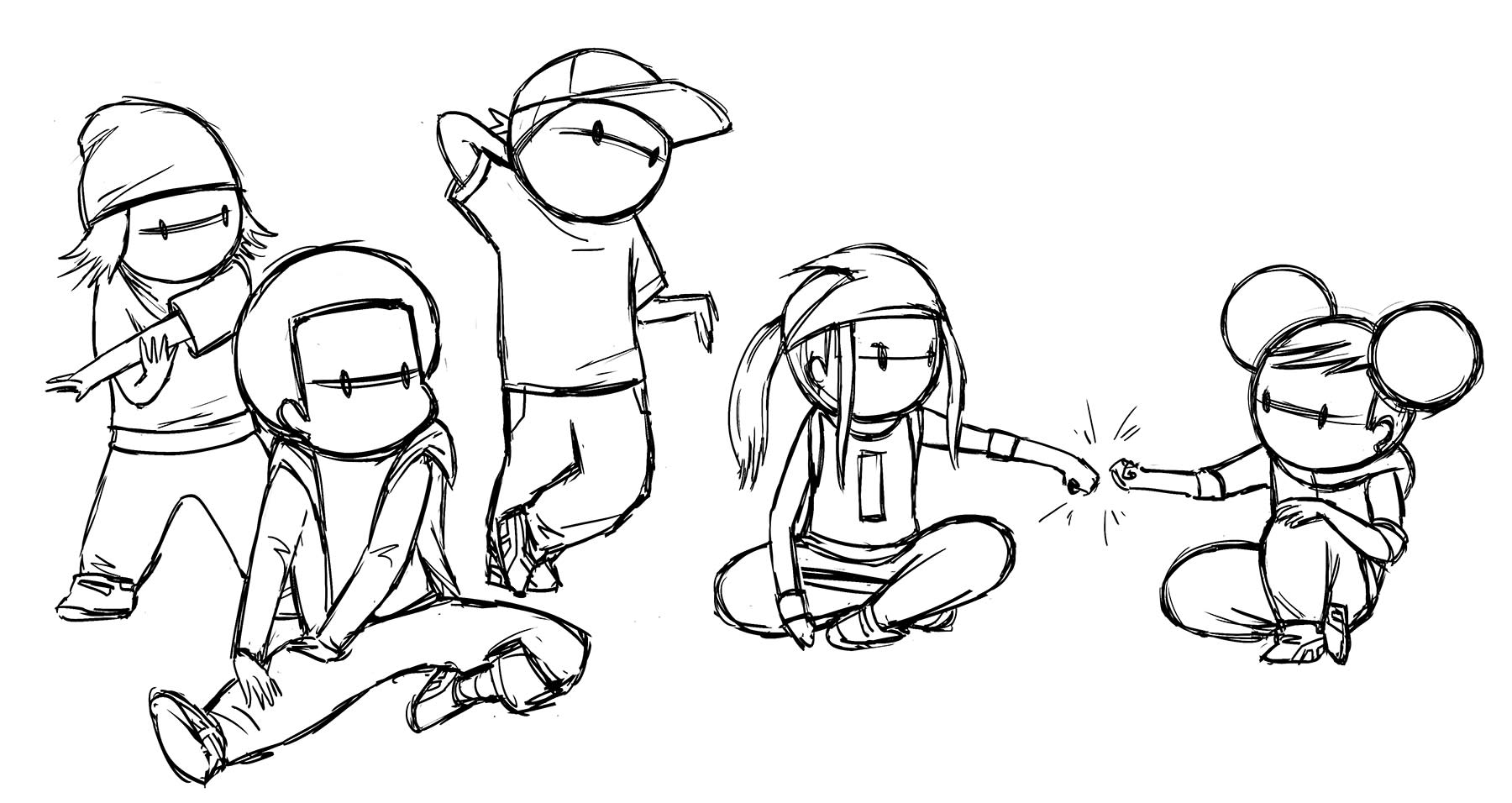 With a tour starting this month, the project has come full circle.

Kid Koala is not a game developer. Born Eric San, the Canadian DJ and turntablist has been spinning records and making beats since he was 12. Over the past three decades, he's DJ'd breakdancing battles and worked with legends of the electronic music scene like Amon Tobin. He's also scored films, written graphic novels and even collaborated with Mike Patton of Faith No More and Dan the Automator on an album of "love" songs. But he is not a game developer. Like many, he grew up playing Super Mario Bros., and back then if you'd told him one day he'd work with Nintendo, he'd never have believed you.

His latest project is Floor Kids, a rhythm game that's a celebration of breakdancing culture. It's something he worked on, one way or another, for over ten years. The game was released last December for Nintendo Switch as part of the company's "Nindies" program. When San and creative partner Jonathan "JonJon" Ng were first approached by Nintendo, neither had any idea what a Switch was, but agreed anyway. "Nintendo was like some company from outer space that created this awesome game," he said. "It was a no-brainer for me." Now, the game is coming to PC, PlayStation 4 and Xbox One very soon.

Floor Kids started life over a decade ago when San and Ng were working at Canada's National Film Board. San had just released Your Mom's Favourite DJ, and Ng was animating a short film about a kid with Asthma. Ng had been a breakdancer off and on for awhile, but it took until 2004 for him to form a regular crew and start practicing weekly. He'd spend his days animating, then go home and dance and to wind down from that; he'd sketch breakdance animations. He doesn't consider himself a professional dancer, but said that he'll "definitely get down and help get the party started." During crunch, the stressful final stage of game development, Ng would breakdance in the studio to relieve muscle pains from drawing.

He was familiar with Kid Koala thanks to breakdancing, and one day showed up at San's house with a stack of animation paper. On it were a couple of kids having a breakdancing battle, bouncing around from page to page. San recalled nodding his head to the silent beat the kids were dancing to as Ng flipped through the paper. Ng said that his drawing rhythm could've influenced what he'd shown San, or it could've been the way he was fluttering the pages.

As you can see in the short above, the characters' moves have subtle differences and styles. Ng's animations are driven by an acute knowledge of the physics of the dance moves and how they link from step to step. His understanding of the nuance and different styles enabled him to break each windmill or head-spin down into individual frames of animation. "He literally knows the rotations, the gravitational torque on all the spins just because he's done the moves himself," San said. "I realized I was dealing with a bit of a savant," he added, laughing.

After that, the pair began collaborating, with San providing foley work and music for Ng's short films, even taking the animations on tour to serve as visuals during his concerts. The pair knew that their project had potential, but weren't sure what to do with it. Five years ago, San took to Twitter to in his words, "cold call" some local game developers and see if they'd want to talk.

Mike Wozniewski is the founder of Hololabs, a development studio in British Columbia, Canada. Ng and San met with him in 2013, and he was the first developer who didn't mention changing Floor Kids' expressive art style. "[Hololabs] stepped up to the plate and really wanted to do it exactly how it was in the old videos," Ng said. Other programmers wanted a "super digital" aesthetic that'd be easier to code. That wasn't something Ng wanted because it'd take away the spirit of how he works.

"In my animation career, a lot of times that roughness, that sketchiness, gets cut at a certain part of the process," he said. He continued the clean versions don't look as good as they did prior, "but this is what you're told is going to sell the product better."

Ng has set up shop at break competitions before, using a marker to draw the winner, Floor Kids style. Then he'd give it to them on the spot. "Because I understand the dance as a language, I know their best moves, and I'll make sure it's one of the most memorable moments from the battle."

Floor Kids: The Video Game's animation and art aren't perfect because they were never supposed to be. Everything has a bit of a rough, penciled look like it was ripped out of a sketchbook — not a Disney animation cel. Even when you're glancing at screenshots, everything feels like it's in motion. Ng attributes that to his manner of pencil and brush strokes. He said that the speed with which you put a line on a page is the speed the eye traces the drawing. "If you're really hesitant and feathery, and take a really long time, your eye might take a really long time," he said. "If you do stuff really loose and fast and sketchy, your eyes tend to move that way too."

You can't talk about Floor Kids without mentioning the tunes. San wrote a double album's worth of music for the game and handled all the sound production. The main menu music is what it is because Wozniewski and Hololabs told San they needed something that loaded quickly and looped well. By having the menu select sounds in the key of the backing track, simply bouncing from one option to the next sounds like you're making music.

From there, you can swap over to the Break Deck to check out the available moves and combos. Each character has a set of cards, and each time you move between cards, a scratch sound is triggered, and the main menu music never stops playing. During the recording process, San would make a song and press it to vinyl on the record cutter in his studio. He did this with the menu beat too, and recorded a scratch session with the freshly pressed record and exported the scratches into Pro Tools. He split the solo into some 300 different pieces. "You can just go in there and pretend you're Kid Koala," Ng said.

The initial intent was to make sure sounds didn't get stale as you moved through the different combo lists, but what happened was the team ended up creating a sort of virtual instrument. "When [Hololabs] showed me it in action, it was really funny because I said, 'Wow, I could take my Switch and plug it into a PA system, throw a beat on and probably learn how to do a set.'" In my time with Floor Kids, I've probably spent as much time scratching around the Break Deck as I have actually playing the game.

As for the music itself, the soundtrack is an exploration of early B-boy anthems through the electro era and '90s. The unifying aspect is that, like the visual style, the music is scratchy and imperfect. "It didn't make sense for me to say, 'OK, I'm gonna gridlock all the sequencing and everything's gonna be perfectly quantized and this and that,'" San said.

He recently got the test pressings of the soundtrack's vinyl edition and set them on his decks at home. "I was having a ball just live looping and stuff like you would if you were DJing a break battle," he said. "I feel like, from that, it's like, 'OK, at least I got that part right.'"

He's so proud of the music that he's taking it on tour, treating it like a traditional record. Kid Koala's Vinyl Vaudeville will hit 18 cities across Canada and the US and will feature demo kiosks for the game so attendees can battle each other. San has fans who'd never buy a game console, and they more or less demanded he put it on wax, so taking the music on the road was the logical conclusion point. To that extent, so is porting the game to every modern platform.

Floor Kids isn't just a video game; it's a platform for music, animation, books and who knows what else. San and Ng embrace that they aren't game developers, and as such are comfortable letting Floor Kids go in whatever direction feels natural. The team already has ideas for add-ons for the game, though, and perhaps even a sequel. "We could keep going," San said. "Who knows, maybe someday there will be a Floor Kids: The Diner."