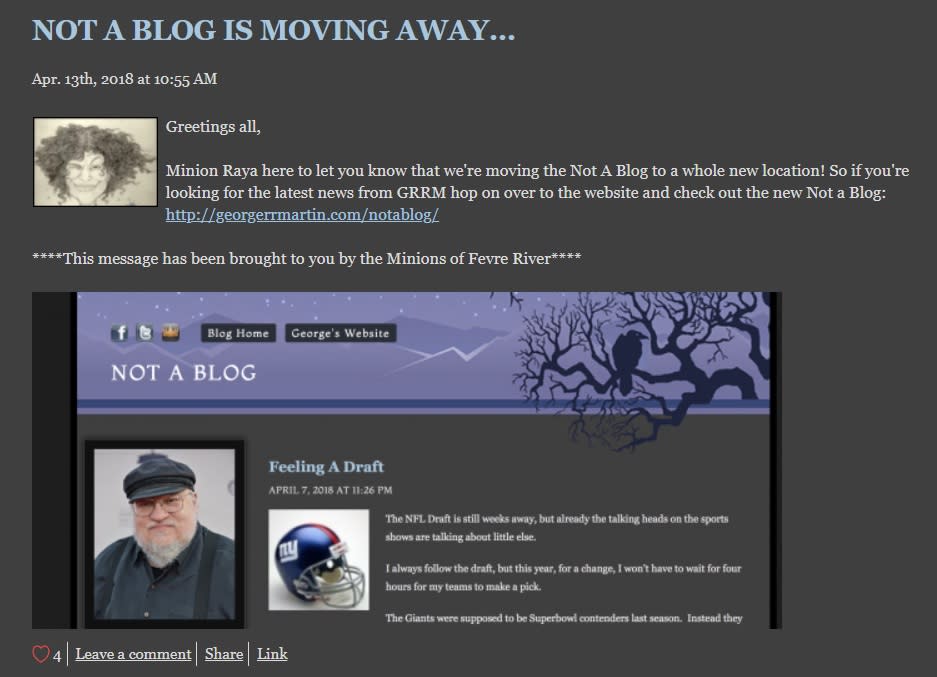 In the mid-aughts, LiveJournal was one of the top blogging services, and many a teen poured out their emotions on the site's digital pages. But little did the world know that in 2005, a popular-in-his-genre fantasy writer would join the platform and continuously blog long after the world moved on. Game of Thrones' George R.R. Martin spent the next 13 years updating fans on his life and times, keeping a casual record even as his fame skyrocketed alongside the increasingly-popular HBO show based on his book series. But valar morghulis, and so too must blogs: Martin has killed his LiveJournal.

Today marks the last entry on his lovably-named Not A Blog, which served as a reliably intimate nexus for fans to get a peek into Martin's life and even interact with the famous author. There talked frankly about goings-on in the writing world, convention appearances, politics and of course, melodramatic accounts of his team the New York Giants. He also wrote about A Song of Ice and Fire's eagerly-awaited next book The Winds of Winter in 2014, 2015 and 2016 as it became increasingly clear that the HBO show would surpass the events of the novels. But he also used the space to open up about losing friends both personal and professional.

Of course, he's not done blogging -- he'll just do it on his own site from now on, which has faithfully recreated the lo-fi look of his old LiveJournal. Unfortunately, as his entry on March 5th noted, Martin admitted that his busy schedule will keep him from blogging much for awhile, and some posts will be done by his 'minions.'

But the new site will always be a facsimile of the old platform. Now that LiveJournal has lost its last great user, who stubbornly resisted jumping to the MySpace or Facebook or Twitter, we've lost a link to a less-connected world. One in which the best way to express yourself online was to post earnest thoughts in a corner of the world wide web.

In this article: blog, blogging, entertainment, GameOfThrones, georgerrmartin, internet, livejournal
All products recommended by Engadget are selected by our editorial team, independent of our parent company. Some of our stories include affiliate links. If you buy something through one of these links, we may earn an affiliate commission.