The 65th anniversary Corvette is a performance beast for data nerds

The Z06 Carbon 65 is what happens when raw horsepower meets computing.

The Corvette is 65 years old. Take a moment to let that sink in. Typically, in your sixties, you slow down. You relax and if you're lucky, settle into a nice long retirement. The 2018 Z06 Carbon 65 convertible is doing none of those things.

If anything, Chevrolet has produced one of the best Corvettes ever. It's fast (duh), but thanks to lightweight materials and an onboard data tracking system, the Vette is ready for the new generation of drivers to take the wheel. Just be ready to drop a lot of cash. Like, all your cash.

At $111,000 the Carbon 65 special edition Corvette will drain your savings. But if you do cash out your 401k for the special edition convertible, you'll join a special group of owners. Chevrolet is only building 650 of these, and I got a chance to spend time in number 140.

When you sit in the Z06 it's immediately apparent that it's made for weekends at the track. With 650 horsepower and 650 pounds of torque and a zero-to-60 time of 2.9 seconds, it's unlikely you're going to get the full experience of the car (unless you're cool with collecting tickets like they're Pokemon). You need a road without other drivers and the cops. And Chevy is practically encouraging that with new features.

For drivers who want to go faster than the law allows while simultaneously learning how to be better behind the wheel, the automaker has introduced the Performance Data Recorder (PDR). The onboard computer tracks 34 channels of performance while recording video. It replaces the aftermarket GoPro mounted to the windshield and performance-tracking systems drivers place in their track cars with an easy to understand and use the system.

The recorder fires up directly from the infotainment system with only two taps. It's so simple, on the first try I thought I missed a few steps. Sure, it said it was recording, but was it really? To my delight after pushing the stop button and parking the car, I was able to watch back my drive right there with data overlays of my speed, tachometer, which gear I was in and what g-force I was pulling around corners. It's super nerdy, yet simultaneously helpful. 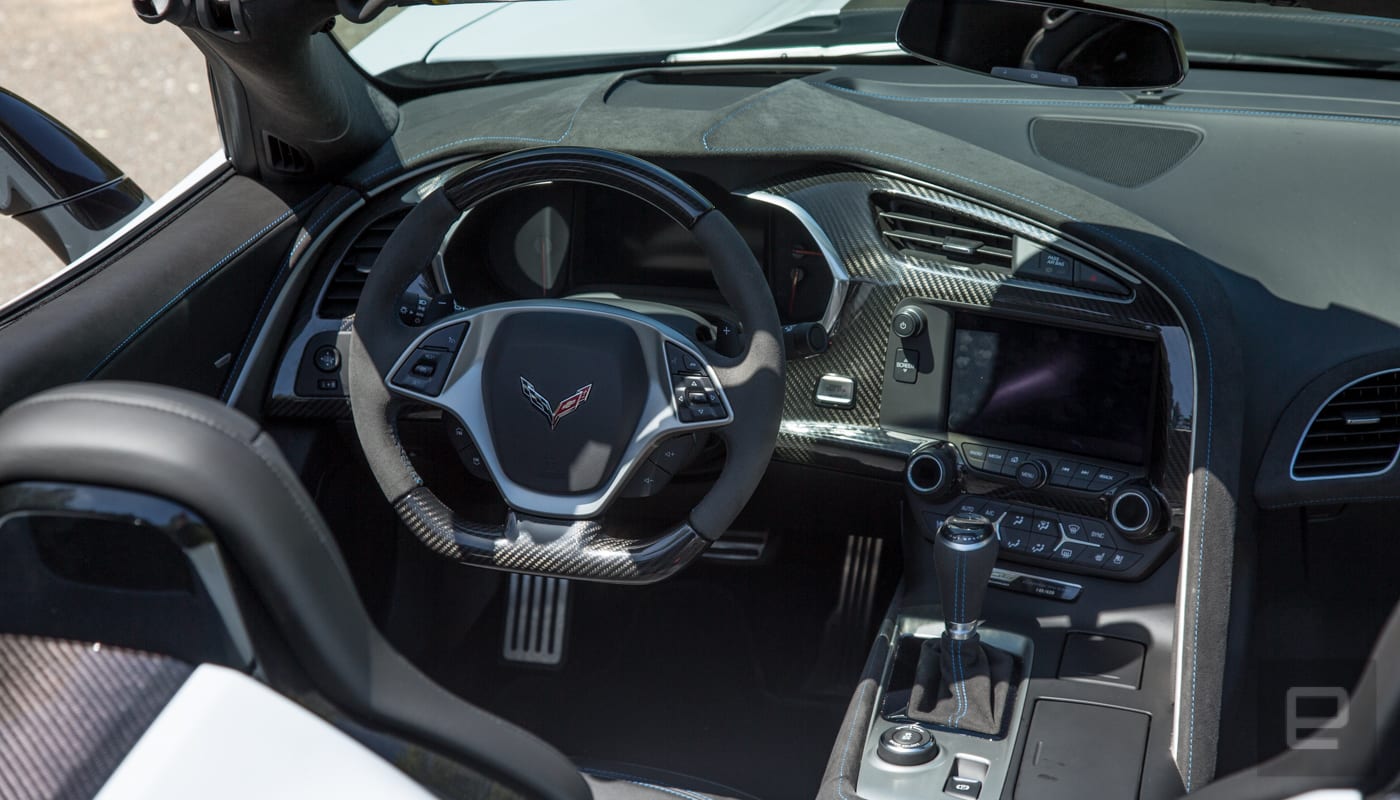 For example, you might be that person that veers out of their lane while cornering but don't really notice. With evidence right there in front of you, you'll start to make a conscious effort of staying in your lane on switchbacks. The rest of us on the road will also appreciate it.

The teaching tool only gets better when you transfer the video (stored on an SD card in the glove compartment) to the Cosworth application (Windows only). The app displays your drive on a map along with an incredible amount of detail, such as steering angle or pressure applied to the brakes and accelerator. It's an extravaganza of data that should appease both data nerds and car nuts.

My biggest problem with the system is that the videos are only 720p. They're good enough for Twitter and Facebook sharing, but if you watch them on your TV, the quality is disappointing.

Sure, with all that power, you might be tempted drift your way around every corner, and thankfully the steering feels precise. The result is that I always felt completely in control of the situation. Plus, the car feels lighter than previous generation Corvettes thanks to an aluminum frame and carbon fiber everywhere. 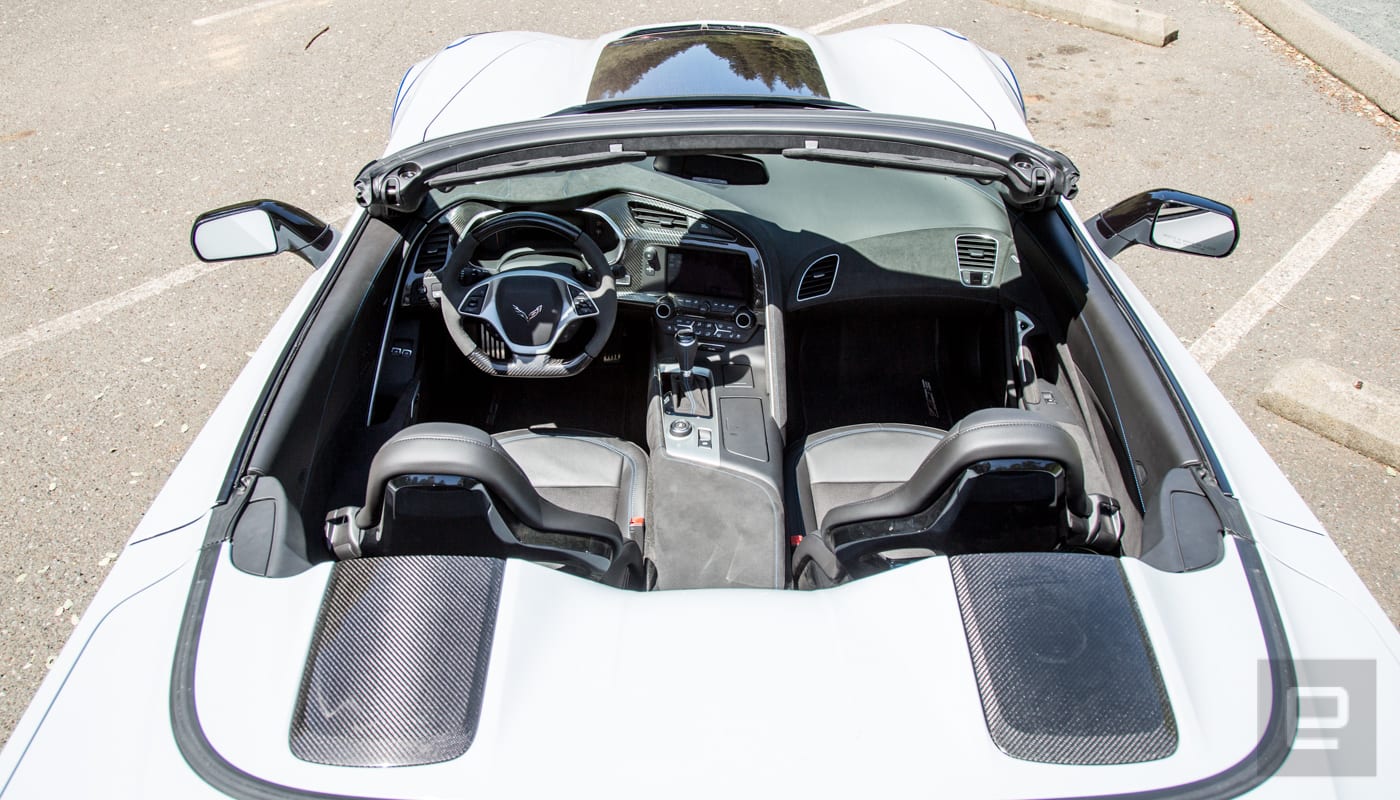 The interior is pure sports car. The racing seats keep you from sliding around the cabin during your recreations of "The Fast and Furious." But after three or four hours they do start to wear on your body, especially if you happen to skip cardio days at the gym. The steering wheel is wrapped in carbon fiber and suede. The latter for better grip. Everything in the car is driver-centric -- the center dash is pointed so far away from the passenger their climate controls are mounted on the very right below the vent.

The infotainment system suffered just a hint of latency. I hoped Chevrolet would update it for the 65th anniversary 'Vette. Alas, it's adequate and with Android Auto and CarPlay support, you'll likely use it only for the PDR. The dash cluster, on the other hand, is a wealth of knowledge, from the typical speed limits and tire pressure to a timer that tracks your zero to 60 runs (and tells you how warm your tires are).

Then there's the secret compartment. Well, it's not really a secret; there's a big button that says "screen" next to it. When you push that, the 8-inch display lowers to reveal an additional storage area with enough room for my phone, wallet and sunglasses. When friends would get in the car expecting me to do donuts at every intersection (I didn't), instead I'd show them the compartment. In a car that has a trunk that's capable of transporting two pieces of carry-on luggage and not much else, any additional storage is welcome.

That little storage area is like the rest of the Corvette. Fun but completely impractical -- which is what a sports car should be. It's something you drive to go fast even though 80 percent of the time, you're not going to use more than 10 percent of it's potential.

But the potential to easily do donuts in abandoned parking lots is there, and when you do find a stretch of empty road in the desert or make it to the track, the car delivers. That said, you really don't have to drop over $100,000 to put a Corvette in your garage.

Let's take a quick look at that $111,000 price point of the Carbon 65 version. Again, Chevy will only make 650, of these so you're probably not going to get one anyway. Plus, there's a Z06 Corvette with a manual transmission (you should only buy this car with manual transmission) starting at about $80,000. That's still a lot of money but for the power and features you're getting, it's a steal compared to offerings from Porsche, Ferrari, Audi and other automakers. 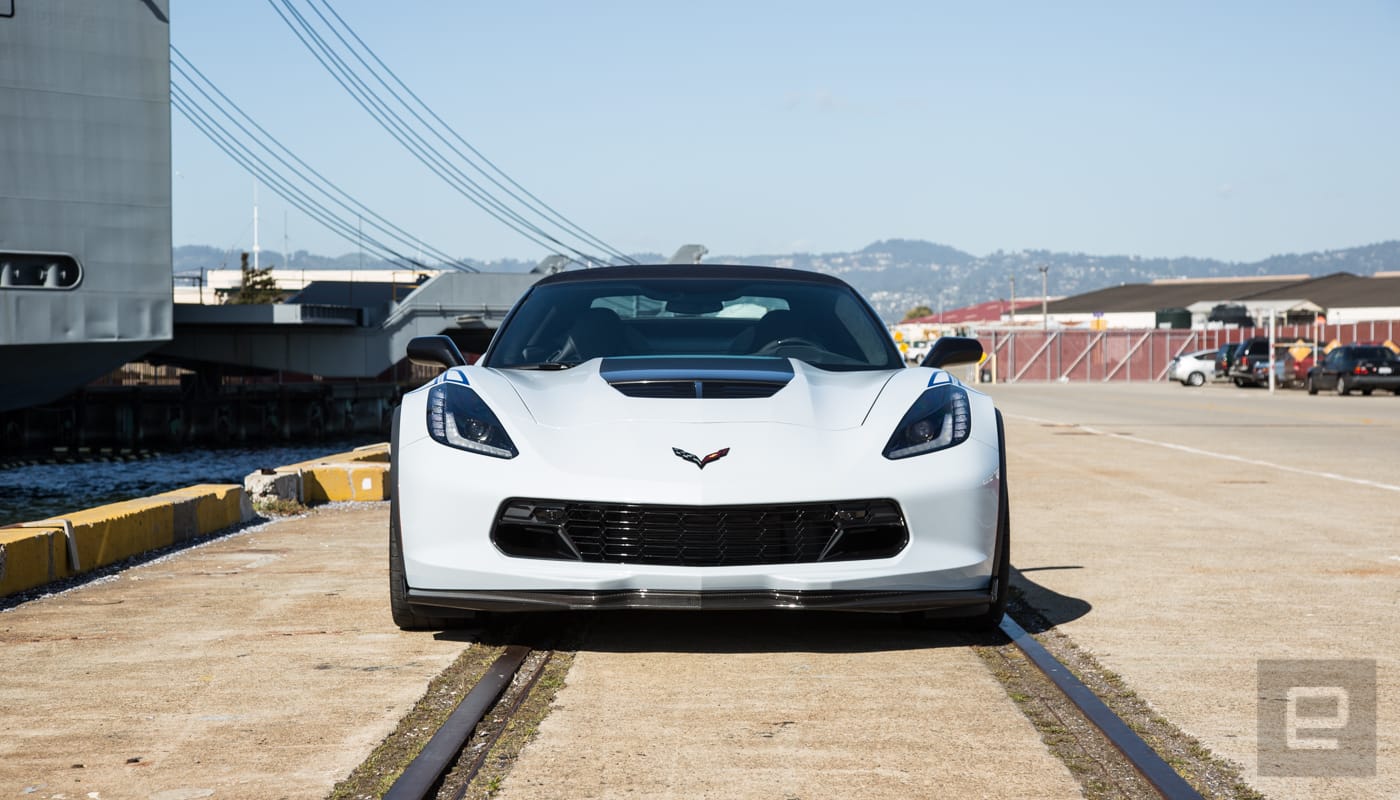 Plus, it's just a fun car to be in. Of course, once you're over the age of 40 everyone thinks you're having a midlife crisis (and maybe you are) when you're seen in the vehicle. And again it's one of the least practical cars you can purchase. But who cares? It's a Corvette and after 65 years it still quickens the pulse and with the PDR system, you can note the exact moment that happened.