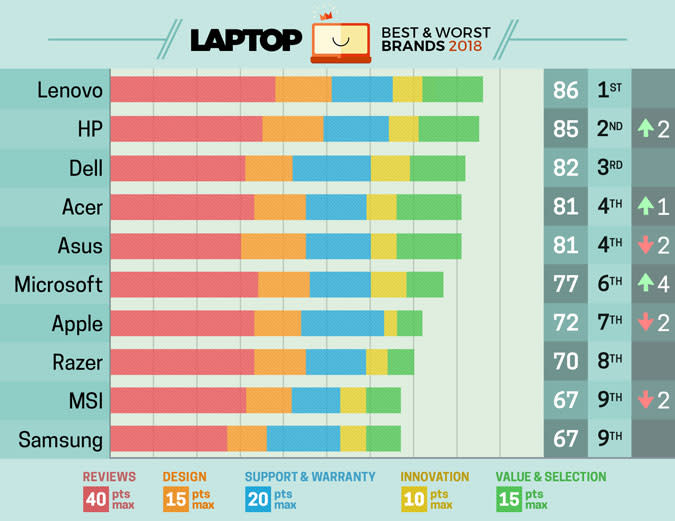 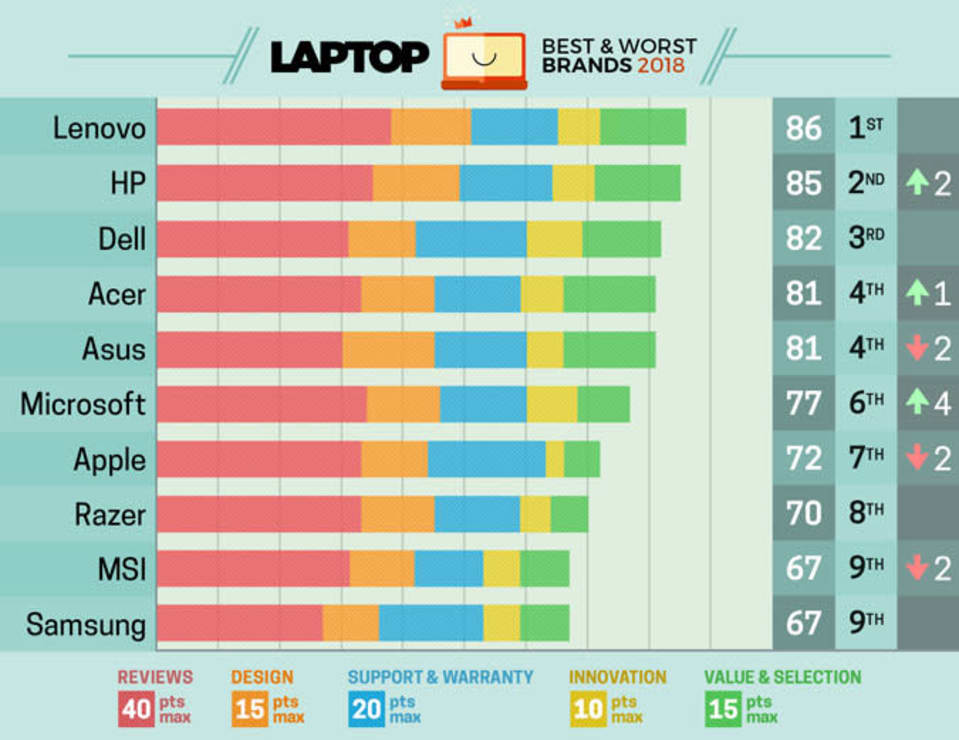 Whether you're purchasing a $1,500 gaming laptop or a $200 Chromebook, the brand matters. That's why we rate the top 10 laptop brands each year, based on their support, design, innovation, value/selection and, most of all, product quality.

For 2018, Lenovo retained its place for a second year as the best laptop vendor, but it just barely edged out second-place HP and third-place Dell. Apple, which used to dominate this contest, fell all the way to seventh place, down from fifth last year.

Lenovo takes first place again this year, on the strength of the company's fantastic product lineup. From the beautiful ThinkPad X1 Carbon, which was the only product to get a perfect, 5-star review in the past year, to the versatile Yoga 920, Lenovo's laptops earned the most Editors' Choice awards of any brand. And a full 53 percent of the company's laptops scored 4 or higher. However, Lenovo's tech support scores declined from last year, and stiff competition from HP and Dell made this a nail-bitingly close race.

After a banner year, filled with compelling laptops such as the gorgeous HP Spectre x360, the powerful ZBook 17 and the affordable HP Envy 13t, HP jumped ahead two places from its spot in 2017 to finish second. With great design marks and the second highest review score, HP gave Lenovo a run for its money.

Dell's product portfolio is a mixture of fantastic premium systems, like the Dell XPS 13 and the awesome Alienware 15, and ho-hum mainstream and budget products. The company earned high marks for its improved tech support, which assigns users personal tech support people who follow up with them.

With laptops like the Spin 1 and Aspire E 15 in its lineup, Acer knows how to provide premium features at bargain-basement prices. The company can also make bold premium products, as evidenced by the $9,000 Predator 21X.

Microsoft makes only a handful of laptops, but all of its systems are first-rate. The company's innovative Surface Book 2 convertible and the colorful and comfortable Surface Laptop are highlights.

Oh, how the mighty have fallen! Apple just doesn't seem as focused on its laptop business as it used to be. The company did nothing to innovate or even tweak its designs in the past year, and only one of the company's laptops earned an Editors' Choice award. However, Tim Cook's company still has the best tech support you can get.

If you're looking for a premium gaming laptop and you have a generous budget, you should look into Razer, which has some really compelling laptops. Those include the Razer Blade and Razer Blade Pro. However, if you need something more affordable, you'll have to look elsewhere.

MSI is one of the premiere gaming-laptop companies, but it still finds itself in a tie for 10th place, primarily because of very weak tech support. However, the company still has some very compelling products, including the MSI GT75VR Titan Pro, which had the best keyboard of any gaming laptop.

If Samsung gave its laptops half the amount of love as it gives its phones, the company would probably fare better. As it stands, Samsung offers a small lineup of laptops that just don't stack up to the competition. It also has, by far, the least-attractive designs in the industry. However, the tech support is excellent.

How We Rate Brands

Each laptop brand is assigned a score based on a 100-point scale. Points are awarded in five categories: Design, Reviews, Tech Support/Warranty, Innovation and Value, and Selection. Here's what each means.

Reviews (40 points): The most important aspect of any brand is the quality of its products. To determine a company's Reviews category score, we used the ratings we gave its laptops between March 1, 2017, and Feb. 28, 2018. We took the average laptop rating for each brand (Laptop Mag rates on a scale of 1 to 5), converted that average rating to a 40-point scale and then added a 0.75-point bonus for each Editors' Choice award.

Design (15 points): We absolutely will judge a notebook by its cover â€" and its sides, deck, bezel and base. Though no two notebooks look exactly the same, each brand has a design language that cuts across its product lines.

Tech Support and Warranty (20 points): When you buy a laptop, you want to know that the manufacturer is going to stand behind that machine and help you with technical problems. We base this category's score primarily on the ratings from our annual Tech Support Showdown, in which we go undercover and pose questions to all of the companies, using their phone, web and social channels. However, 2 out of the 20 points were awarded based on the quality of the company's standard warranty coverage.

Innovation (10 points): The laptop market is moving fast, and if you stand still, you'll get rolled over. For the Innovation category, we awarded points based on the brand's ability to move the market forward by implementing or developing new technologies, as well as by taking risks.

Value and Selection (15 points): How many different kinds of shoppers does the manufacturer address, and do the products provide good bang for your buck? For this category, we awarded points for offering a wide range of laptop types (budget, business, gaming, etc.) and for providing aggressive pricing.

In this article: acer, apple, asus, dell, gear, hp, laptopmag, lenovo, microsoft, msi, partner, personal computing, personalcomputing, razer, samsung, syndicated
All products recommended by Engadget are selected by our editorial team, independent of our parent company. Some of our stories include affiliate links. If you buy something through one of these links, we may earn an affiliate commission.