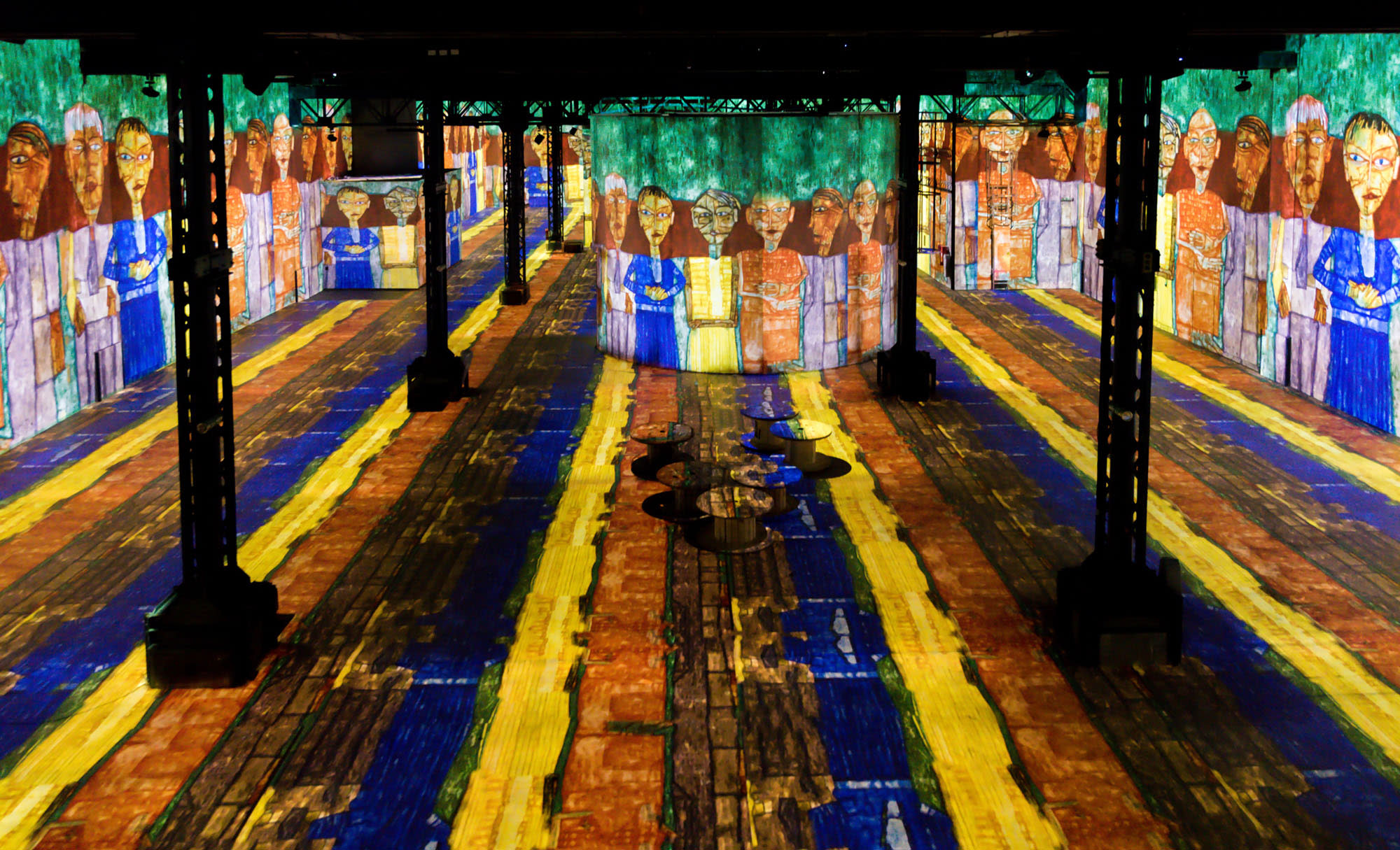 Austrian artist Gustav Klimt is celebrated for his boldly-colored paintings that marry portrait, decorative, symbolic and abstract art forms. Nowadays, they sell for vast fortunes at auction, making it difficult to see a comprehensive collection in one place. A brand new Paris exhibition space called Atelier Des Lumieres (meaning "Studio of Lights) is showing many of his paintings in a whole new way, by projecting them on 35,000 square feet of space including the walls, floors and ceilings.

The show (which opened April 13th and runs until November 11th, 2018), took months to set up, and uses 140 high-end, light-blasting Barco laser projectors and 50 Nexo speakers to create an immersive experience for spectators. It was created by a group called Culturespaces, which developed a system called "AMIEX" (art & music immersive experience), previously used for another exhibition called Carrières de Lumières that drew 600,000 visitors.

The show features over 3,000 moving images with works by Klimt, Egon Schiele and other Austrian artists. The first four sequences take visitors through different periods of Klimt's life and work, including the "Vienna Secession" with its art nouveau themes and Klimt's golden period when most of his masterpieces were created (he literally used gold leaf on some of his works).

Other sequences include works by Schiele and other Austrian artists, and the last one features Klimt's images of women, often nude and adorned in bright, primary colors (and gold, of course).

The multimedia displays and new exhibition space are perhaps the perfect way to show off Klimt's diverse work, and demonstrates how curators are getting creative with digital technology in the service of art. "The role of an art center is to decompartmentalize," said Culturespaces President Bruno Monnier, "and that is why digital technology is so important in twenty-first century exhibitions."

The Culturespaces show is far from a regular projection, the group said, as it's "based on virtualization and very high-resolution projection of works of art on immense surfaces, thanks to unique digital equipment."

"People do not learn about culture as they did in the past," said Monnier. "The passive observation of works of art is no longer relevant, and I'm convinced that people are increasingly learning about art through this immersive experience and the emotions they generate. The marriage of art and digital technology is, in my opinion, the future of the dissemination of art among future generations, as it is able to reach a younger and wider audience than that of the traditional museums."

In this article: art, ArtNouveau, AtelierDesLumieres, entertainment, GustavKlimt, Paris, Projection, TheBigPicture, thenewbigpicture, video
All products recommended by Engadget are selected by our editorial team, independent of our parent company. Some of our stories include affiliate links. If you buy something through one of these links, we may earn an affiliate commission.