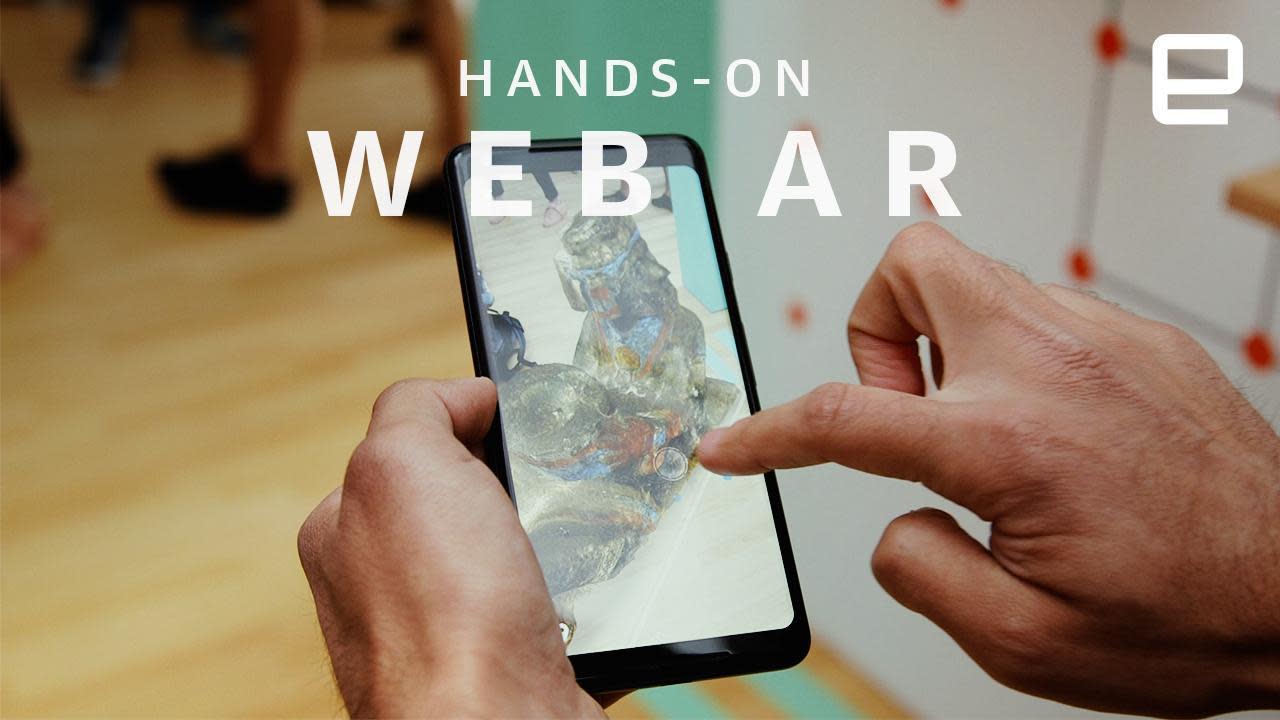 Google believes that 2018 is the year the web turns a corner and starts becoming more immersive, and the company's new WebXR API is at the heart of its efforts. Long story short, WebXR provides a platform to more easily optimize and integrate VR and AR experiences right into web browsers, and developers can start crafting VR experiences for Chrome with the API today. In-browser VR has been a thing for a while, though — web-based AR, however, feels more immediately helpful. It'll be a while before you can virtually plop 3D objects into an augmented reality space inside Chrome, but we just got to take it for a spin and honestly, the AR-friendly web can't arrive soon enough.

Let's set the stage a little bit first. A Google staffer handed me a Pixel 2XL with a prerelease Chromium build, and the only demo available gave me the power-skim through a webpage and dropped an Aztec-offering vessel called a chacmool onto the floor in front of the phone. (Turns out, chacmool were typically used for ceremonial offerings and sacrifices, but this one was free of virtual blood.) Google's demo was pretty basic as far as AR experiences go, but even at this early stage it worked much, much better than I expected. I've used full-blown standalone AR apps that didn't feel as smooth as this: I could move the vessel around the room, rotate it with two fingers, and get nice and close for proper scrutiny with 6 degrees of freedom.

Simply poking around was neat enough, but there was a strong educational angle too. Floating data points hovering around the chacmool offered additional information and context when tapped. I wouldn't have thought much of the statue's red and blue feet, but a quick tap revealed that the red and blue paint used to color the chacmool's sandals helped researchers connect it in time with other pieces of artwork found in Mexico. I always walk away from I/O with a few tidbits of random information tucked away in my head, but I certainly didn't expect to leave with a better understanding of Meso-American art. The demo was actually highly reminiscent of time spent wandering around a museum in Barcelona with a Google Tango-powered tablet, except this time I didn't need specialized hardware. For education and the perpetually curious, web AR is going to feel tremendously valuable.

While the impact of AR in a web browser is already very clear, one weighty question remains: when can people actually use this stuff? Well, it depends on who you are. This particular demo will be available to developers running early Chrome Canary builds in just a few weeks, and Google held an immersive web session at I/O to get those folks ready to start crafting in-browser AR experiences. Sadly, everyone else is going to have to wait — the APIs Google is using to make these experiences possible aren't final yet, so there's really no way of knowing when our browsers will get these major updates. Google offered some hope, though: A lot of the code around in-browser VR applies here as well, so developers won't have to start from scratch. We're obviously still in for a long wait, but considering 100 million phones and tablets out there technically support augmented reality, it's important that Google and its partners get these experiences right.

In this article: ar, augmentedreality, chrome, gear, google, googleio2018, hands-on, immersiveweb, internet, tomorrow, webxr
All products recommended by Engadget are selected by our editorial team, independent of our parent company. Some of our stories include affiliate links. If you buy something through one of these links, we may earn an affiliate commission.