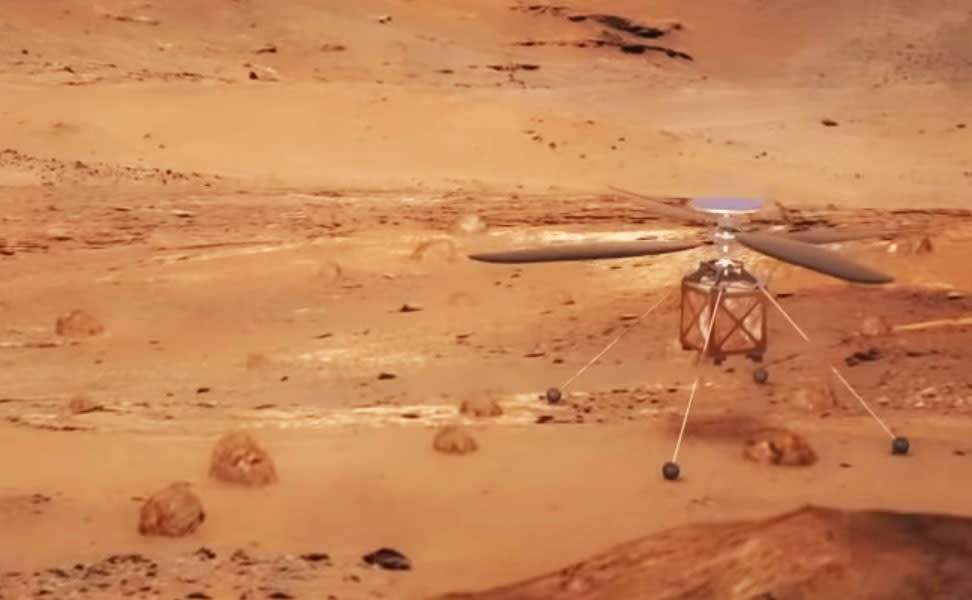 The next vehicle NASA is sending to Mars nestles somewhere between a rover and a satellite, at least in terms of altitude. The agency is bundling an autonomous helicopter with the Mars 2020 rover to test airborne vehicles on the red planet.

The drone weighs 1.8 kilograms (just under four pounds) and the dual, counter-rotating blades will spin at around 3,000 rpm, roughly 10 times the rate of a regular helicopter. That high blade rotation is important to get the helicopter airborne because of the low atmospheric density on Mars -- when the drone's on the ground, it'll already be at an Earth-equivalent altitude of 100,000 feet. NASA also packed in a heating mechanism to help the drone survive the frigid Mars nights.

After the rover lands, it will place the helicopter on the ground and retreat to a safe distance. Once the drone has charged its batteries using solar cells and run through some tests, the rover will relay commands to it from controllers on Earth. NASA hopes the helicopter will ascend to around 10 feet and hover there for around 30 seconds on its first flight. The agency will test the drone over a 30-day period and try up to four additional flights, eventually hoping to keep the helicopter in the air for as long as 90 seconds and let it roam for a few hundred meters.

A successful test could open the door to using helicopters as scouts on future missions, surveying terrain that might be difficult for rovers to navigate and even accessing locations that are unreachable via ground travel.

NASA's Jet Propulsion Laboratory has been developing the helicopter since 2013, and eventually shrunk the fuselage to around the size of a softball to help make the drone viable. The helicopter and rover are scheduled to launch in July 2020 and land on Mars seven months later.

In this article: autonomous, exploration, helicopter, mars, mars2020, marsrover, nasa, space, tomorrow
All products recommended by Engadget are selected by our editorial team, independent of our parent company. Some of our stories include affiliate links. If you buy something through one of these links, we may earn an affiliate commission.