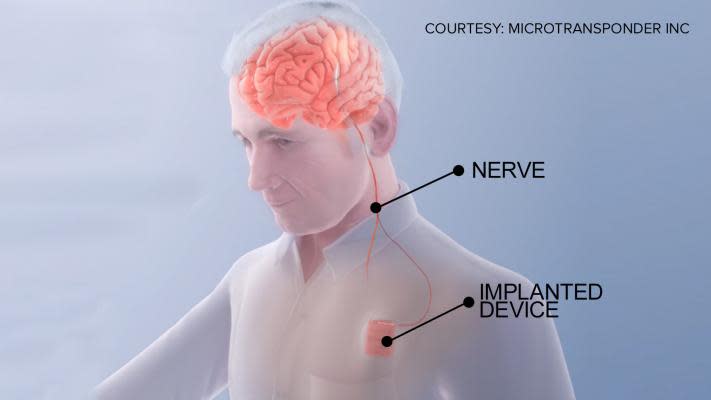 Vagus nerve stimulation (VNS) may play a beneficial role in the motor recovery of stroke patients, new clinical trials at The Ohio State University Wexner Medical Center have revealed. As part of the therapy, stroke rehab specialists surgically implant the MicroTransponder Vivistim -- an electrical device that stimulates the vagus nerve -- into the patient's chest wall. It works via a wireless transmitter, which picks up signals, redirects them to the vagus nerve (located in the neck) and stimulates the brain whenever a therapist pushes a button.

The device assists patients by strengthening motor connections when they perform an action correctly. Essentially, it's rewiring brain circuitry, a phenomenon also referred to as neuroplasticity. This means that the release of new neurotransmitters from the brain could help a patient who has lost mobility in their arms or legs to slowly regain control. Researchers hope that the additional layer of activation will prompt the brain to remember the associated motion, and improve the recovery process. An earlier study showed that 'Paired Vagus Nerve Stimulation' helped around 85 percent of patients who received it. According to Dr. Marcie Bockbrader, a physiatrist at the Wexner Medical Center, it's "like turning on a switch"; she likens the Vivistim to a 'brain pacemaker' that makes a stroke patient's brain more responsive, and suggests that if it's used in combination with regular rehabilitation practices, it could potentially speed things up -- especially in patients who are facing more severe stroke-related impairments.

While the surgery seems to impart little discomfort, and is fairly non-invasive, it is described as a pretty intensive therapy program -- particularly during the initial six weeks. Dr. Bockbrader said that trials are still ongoing and is actively seeking participants.

In this article: engadget, medicine, microtransponder, stroke, therapy, vivistim
All products recommended by Engadget are selected by our editorial team, independent of our parent company. Some of our stories include affiliate links. If you buy something through one of these links, we may earn an affiliate commission.