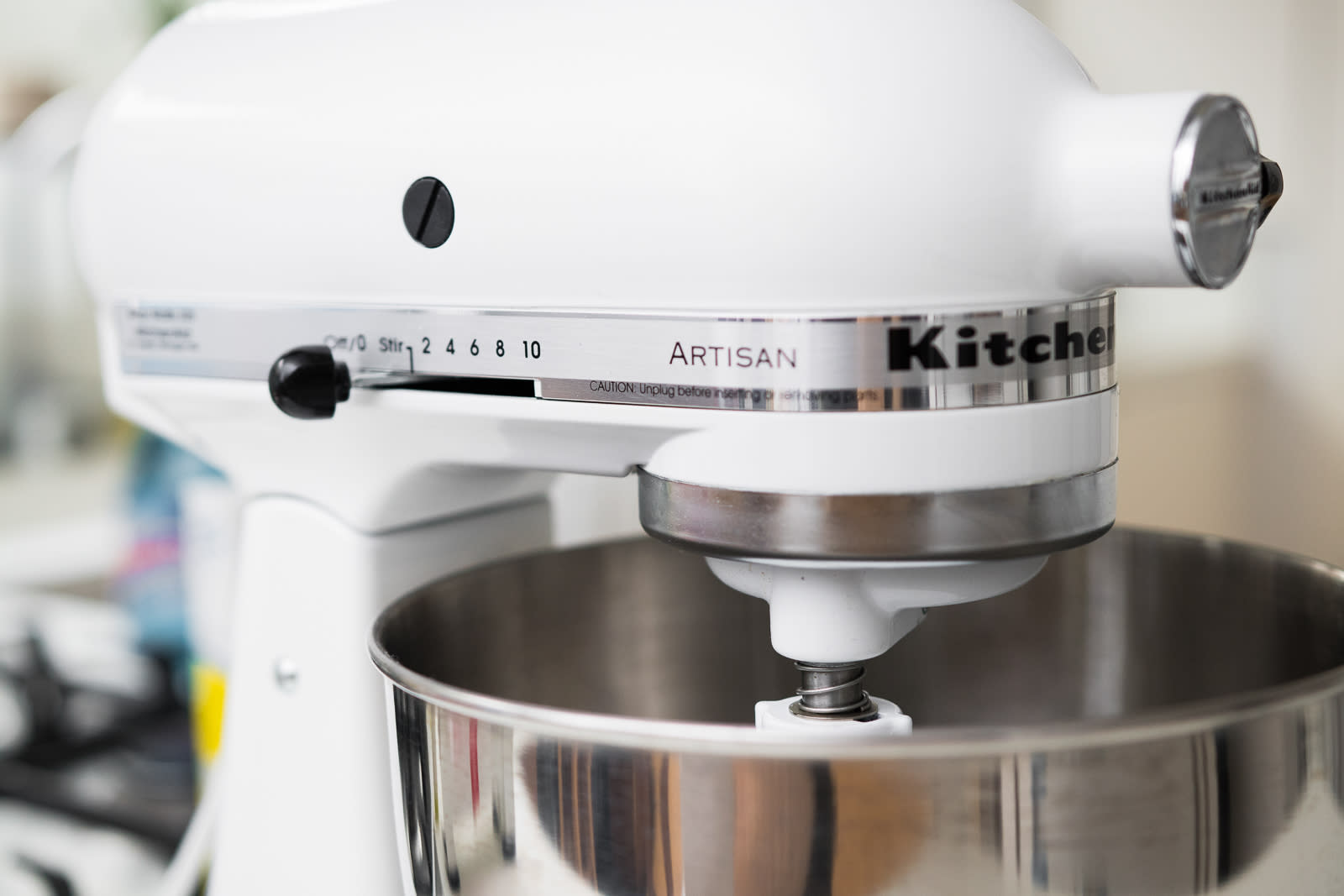 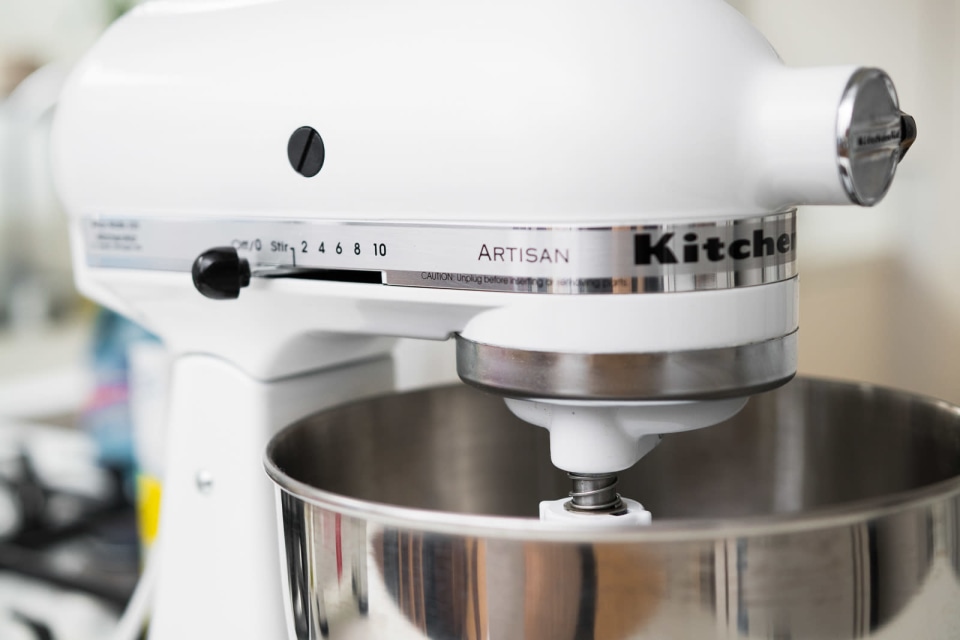 A stand mixer is a great way to take your baking game to the next level, and after more than 30 hours of testing since 2013, we continue to think that the KitchenAid Artisan Series 5-Quart Tilt-Head Stand Mixer is the absolute best for its performance, versatility, and price. It whips up cakes and cookies with ease, and can knead whole-wheat bread dough without straining. If you're an occasional baker looking for something more compact and affordable, you may want to try a hand mixer instead.

A good stand mixer will make your baking (and cooking) life a lot easier. If you bake regularly and have been struggling with a low-grade stand mixer, an aging hand-me-down from a relative, or a hand mixer, you might want to consider upgrading. For the right person, a good mixer can be a total game changer in the kitchen. A well-made stand mixer can turn out loaves of rustic bread, moist cake layers, and dozens upon dozens of cookies. It can make quick work of whipping egg whites into meringue and heavy cream into an airy dessert topping. Great mixers have power hubs for extra accessories that can roll out pasta dough, grind meat, and even churn ice cream. You can find a glut of stand mixers available these days, but they mainly fall into one of two categories: planetary and the type you don't want. Planetary mixers have a single beater that spins on its axis while it rotates around the bowl. This action ensures more points of contact and thus more consistent mixing. The other type of mixer has two stationary beaters that spin while the bowl rotates, and as a result, they don't mix as thoroughly.

Next, we considered what basic tasks a stand mixer needs to excel at. A great mixer should whip cream and egg whites quickly, cream butter and sugar to a pale and fluffy consistency, and knead rustic bread dough without straining, smoking, or "walking" around the counter. It should be heavy enough to stay in place but not so heavy that it's difficult for you to move it around. A handle on the bowl is extremely convenient when you're pouring cake batter, cooking Swiss meringue over a bain-marie, or scooping cookie dough.

When it comes to attachments, you have a few things to consider. Are they dishwasher safe? Are they burnished metal, or do they have a nylon coating? As for bowl size, we agree with the Cook's Illustrated recommendation of 5 to 6 quarts—big enough to make about four dozen standard-size cookies. Stiff peaks from one of many successful batches of Seven-Minute Frosting. Photo: Lesley Stockton The KitchenAid Artisan Series 5-Quart Tilt-Head Stand Mixer is the best-selling mixer from the KitchenAid line on Amazon for many good reasons. It was the only model that aced every one of our tests without a bunch of knocking around and rocking on the counter. It was among the most efficient at creaming butter and sugar, and it whipped lofty frosting and perfect cake batter. Even small quantities blend well in the Artisan's well-sized bowl. The motor runs much quieter than those of some of the other models we tested. This model also keeps mixing relatively mess-free, because the pouring shield slides on and off, even when the machine is in use, and you can simply wipe messes off the mixer's smooth casing. The Artisan isn't cheap, but because refurbished units are often available, we think this can be an affordable machine.

In both the cookie and bread tests, the Artisan mixed the dough without rocking or straining the motor. The cookie recipe we used involves more mix-ins than your usual drop-cookie dough, and several of the mixers in the testing lineup strained with the effort, including the Breville, the top scorer in testing by Consumer Reports (subscription required). Though all of the mixers tested made beautiful and tasty loaves of bread, the Artisan did it a lot more gracefully. In fact, both of the KitchenAid stand mixers aced this test. The Cuisinart stand mixer rocked only slightly, but the remainder of the testing group couldn't hang with the bread dough and rocked pretty severely. The Artisan was also a whipping ace. Seven-Minute Frosting requires you to cook egg whites, corn syrup, and sugar over a water bath until it reaches 160 degrees Fahrenheit; you then transfer it to the mixer and whip it on high until it's thick, white, and fluffy. The stated yield of this recipe is 8 cups, but getting more than that indicates whipping prowess. The Artisan yielded 9 cups of frosting; the other stand mixers hovered in the still respectable range of 8¼ cups to 8½ cups. The Kenmore Elite and the KitchenAid Professional 600 actually did slightly better than the Artisan, but fell short in other areas.

The Artisan's design is simple and user-friendly: speed control on the left, head lock on the right, power hub for extra accessories in the front.

KitchenAid has only a limited one-year warranty on its stand mixers, which seems to not sit well with people. We think that if you read the manual about maintenance and know the limitations of your mixer, you shouldn't have issues with its longevity. Unless it's defective out of the box, this is a tough machine made by a company that is a favorite of professional bakers and restaurant chefs.

The KitchenAid Pro 600 Series 6-Quart Bowl-Lift Stand Mixer is a taskmaster designed to tackle big jobs, which is why it's often found in restaurants and test kitchens. The bowl clips into the machine's sides and back and lifts into the head attachment instead of twisting into the base as with the other models. The heavy-duty motor made quick work of almost all the test batches we put this model through, but the larger bowl proved to be a liability on our test with a single egg white, where the whip didn't even make contact. But this mixer isn't for whipping one egg white—it's best for large batches of dough. The spacious 6-quart bowl yields more loaves per batch, and the S-shaped PowerKnead hook is better at keeping dough in the bowl and not up around the gear and spring.

In this article: gear, home, kitchenaid, partner, standmixer, syndicated, thewirecutter, wirecutter
All products recommended by Engadget are selected by our editorial team, independent of our parent company. Some of our stories include affiliate links. If you buy something through one of these links, we may earn an affiliate commission.