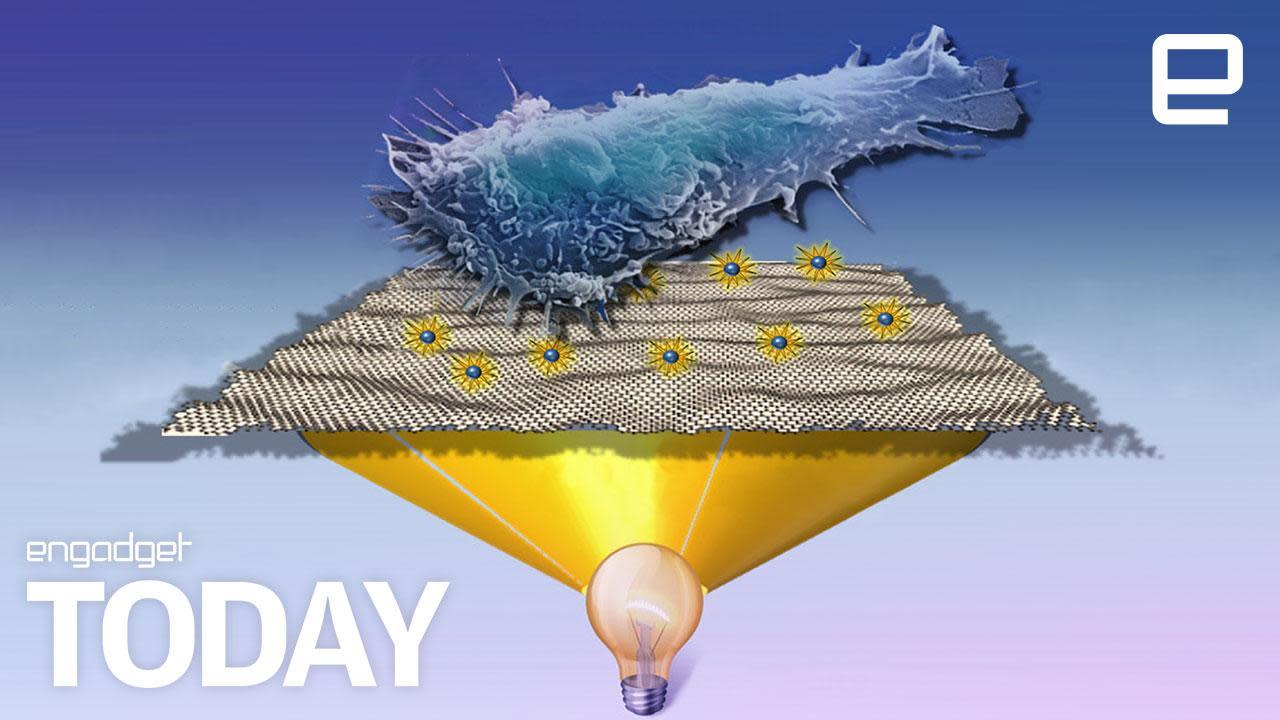 A chance lab discovery is opening up the possibility for wide-scale improvements in drug screening, application of selective painkillers, and selectively nuking cancer cells. The mystery material? Graphene, a semi-metal that's composed of a single layer of carbon atoms. It's already being used to make flexible OLED displays and reduce the energy costs of desalination, but its potential benefits for the medical field look promising too.

It began with a theory -- scientists at the University of California knew graphene could convert light into electricity, and wondered whether that electricity had the capacity to stimulate human cells. Graphene is extremely sensitive to light (1,000 times more than traditional digital cameras and smartphones) and after experimenting with different light intensities, Alex Savchenko and his team discovered that cells could indeed be stimulated via optical graphene stimulation.

"I was looking at the microscope's computer screen and I'm turning the knob for light intensity and I see the cells start beating faster," he said. "I showed that to our grad students and they were yelling and jumping and asking if they could turn the knob. We had never seen this possibility of controlling cell contraction."

Savchenko believes this is significant because it allows researchers a way to culture cells as if they're working inside the body; instead of resorting to petri dishes, scientists could artificially stimulate a pain response in neurons, then develop an anti-pain drug dealing only with pain receptors involved in that specific instance. Because the process would only work as a pain treatment, it doesn't possess the ability to become a recreational drug in the way morphine or codeine (which are known to cause withdrawal and dependency) might.

The potentially groundbreaking takeaway is graphene's ability to wipe out cancerous cells without damaging neighboring healthy cells. IEEE Spectrum explains the electrical resting potential (ERP) of cancer cells is usually lower than healthy cells, which means it takes far less electrical stimulation to open their ion channels, and if kept open long enough, a deathly influx of ions can nuke them.

Graphene might seem like a miracle material, but it isn't perfect -- certain forms can be toxic to humans, and the long term side effects, if any, are still relatively unknown. More research is needed before Savchenko and his team can move to human trials, thereby determining whether it can become a viable therapeutic solution.

In this article: AOLoriginals, DailyShow, Engadget, EngadgetToday, EngadgetVideo, entertainment, graphene, medicine, painrelief, science, tomorrow, hidden:vv_3x4:45a64393-475a-3398-bbd2-2cf4f22ba450, hidden:vv_09x16:0fa1ed4e-bf47-39e4-b1cd-50f132d560c6, hidden:vv_16x09:65e3c16d-5d4d-3eee-bffe-1644aee6a9c7
All products recommended by Engadget are selected by our editorial team, independent of our parent company. Some of our stories include affiliate links. If you buy something through one of these links, we may earn an affiliate commission.