HTC rejoins the dual camera fray with the U12+

It's the company's first dual-camera phone since the One M8.

There's no better Android underdog than HTC. Long before Samsung cemented itself as the high-end Android leader, HTC was pumping out innovative devices like the One X and One S in 2012. It followed up with the flagship One (M7), which featured a sleek aluminum unibody design that left a lasting impact on the smartphone world (even Apple took a few notes).

Since then, though, HTC's story has been one of significant ups and downs. We liked last year's U11, and the follow-up U11+ was even better. But the company sold its team behind the Pixel phones to Google earlier this year, which strongly hinted that HTC would be more focused on the Vive headset than smartphones. Perhaps that's why its flagship for this year, the U12+, isn't a huge upgrade.

If you've seen the U11+, you've pretty much seen the new model. HTC stuck with the same "3D liquid glass" design, which gives the phone a uniquely luxurious look. It'll be available in black, red and a gorgeous translucent blue, which gives you a glimpse at the phone's internals.

As you've probably gathered from the name, the company is also going big with this phone. The U12+ features a 6-inch Quad HD+ (2,880 by 1,440 pixels) Super LCD 6 screen with an 18:9 aspect ratio and HDR 10 support, just like the U11+. You won't find any notch on this display, though -- there's still a large bezel at the top and bottom. HTC managed to shave down the already minimal side bezels by 1mm, and the phone is also 1.9mm shorter than the U11+. 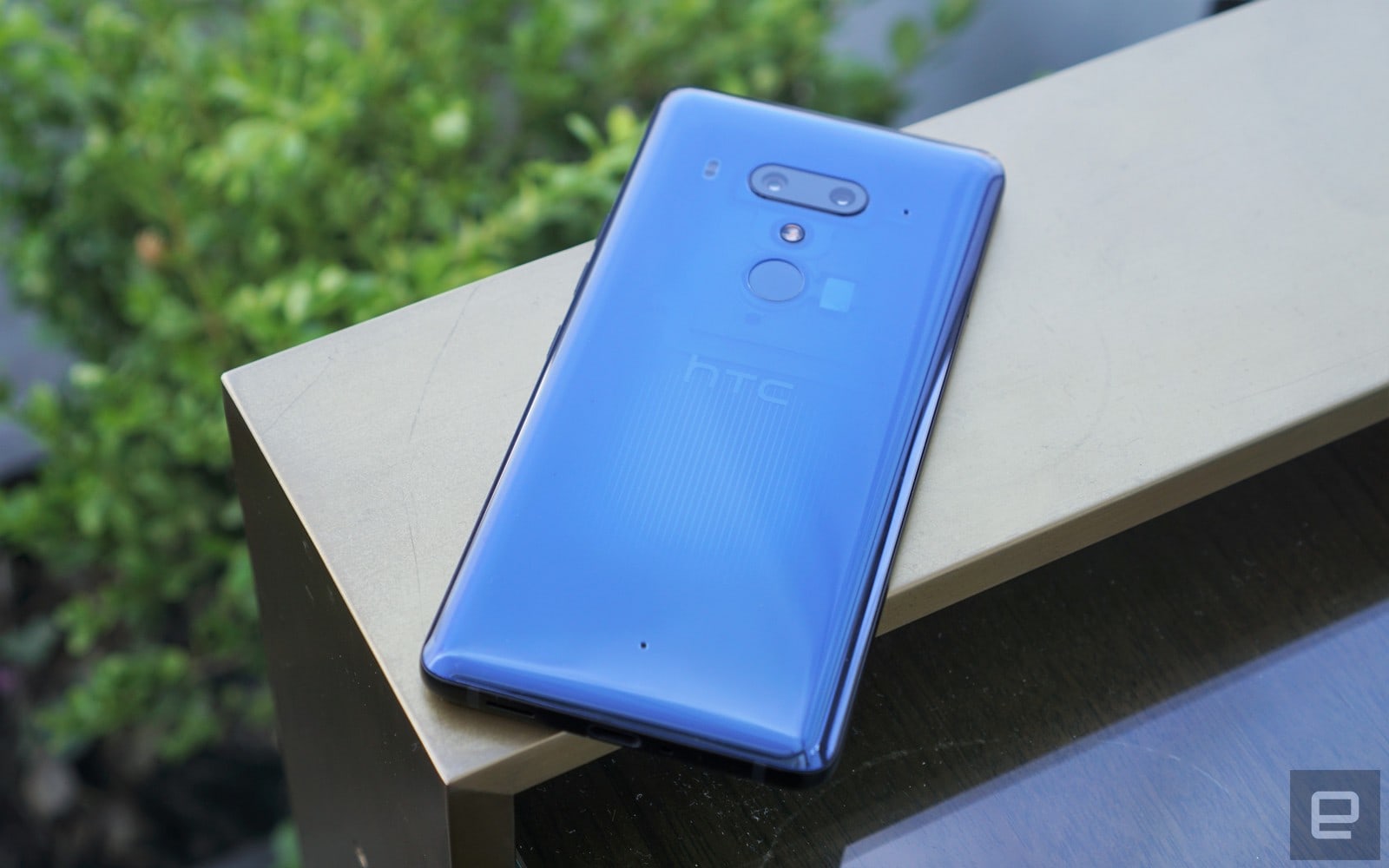 And if you were wondering, there won't be a smaller U12 this year. That's a bit disappointing for anyone with smaller hands, but it makes sense for HTC to focus on a single flagship -- especially after the confusing array of U11 models we saw over the last year.

Look a bit closer at the U12+ and you'll notice some subtle differences from the last model. There are two cameras on the back (which we haven't seen from HTC since the One M8) surrounded by a pill-shaped enclosure. One is a 12 megapixel wide-angle shooter featuring HTC's UltraPixel 4 technology, and the other is a 16MP telephoto. As with other dual-camera phones, they'll let you optically zoom up to 2x and get more bokeh (the gorgeous background blurring in portraits) from your photos. HTC also brought over the dual front cameras from the U11 Eyes, except this time they're both 8MP. For the most part, they'll help you get some bokeh in your selfies.

HTC is also debuting Edge Sense 2 in the U12+, which lets you squeeze the phone to access apps and shortcuts. Now, you can double the side sensors to create to a smaller interface, making it easier to use one-handed. That miniature UI will automatically adjust to the left or right side of the screen, depending on the hand you're using to hold the phone. The side sensors will also detect if you lay down and prevent the screen from flipping into landscape mode. I'm not quite sold on squeezing my phone just yet, but that smart orientation detection is something I'd like to see on more phones. 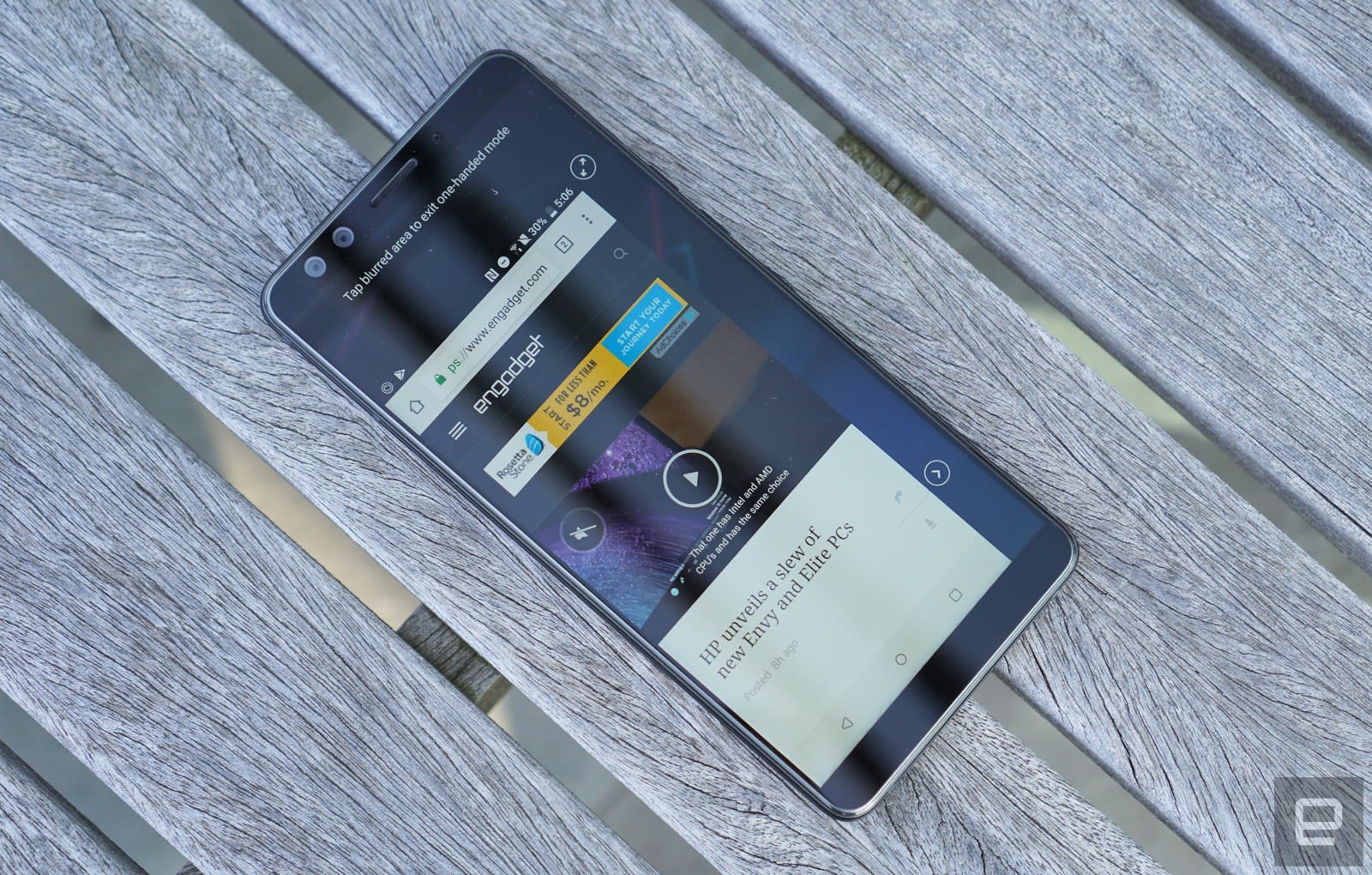 As you'd expect from a flagship Android phone today, the U12+ is powered by a Snapdragon 845 chip and 6GB of RAM. You'll also be able to chose from either 64GB or 128GB of storage, and you can expand that with microSD cards up to 2TB. It'll ship with Android Oreo, but HTC assures us it'll be upgradeable to Android P when that's officially released.

With its sleek glass case, the U12+ feels great, though its extra wide 18:9 aspect ratio makes it incredibly top heavy. It would have been nice to see HTC get rid of those chunky top and bottom bezels, especially since that's something most of its competitors are doing this year. I only had a few minutes with the phone, so I couldn't really stress it much. But maneuvering through Android and juggling several apps was as speedy as you'd expect with its high-end hardware.

As for the camera, it offered a decent amount of bokeh when taking portraits, but HTC's software still plenty of issues to iron out. In particular, the adjustment dial for background blur and zooming is awkardly placed, since it's easy to trigger the camera's exposure controls instead.

For the most part, the U12+ seems like a phone built for HTC fanatics, and not something that would tempt people away from Samsung's Galaxy S9 or the iPhone. There aren't any major surprises or innovation -- just the upgrades you'd expect. You can pre-order the blue U12+ today for $799 (64GB) and $849 (128GB) from HTC's site and Amazon, while the black model is only available with 64GB of storage.

All products recommended by Engadget are selected by our editorial team, independent of our parent company. Some of our stories include affiliate links. If you buy something through one of these links, we may earn an affiliate commission. All prices are correct at the time of publishing.
View All Comments
HTC rejoins the dual camera fray with the U12+