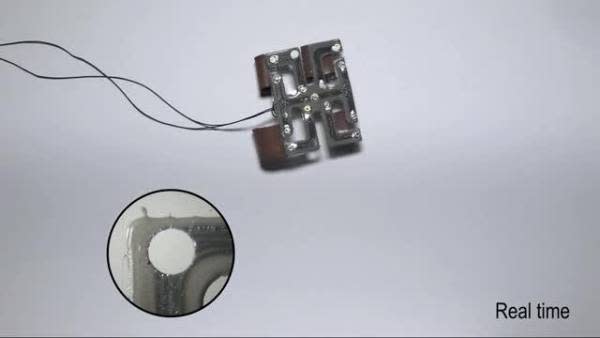 Most conventional androids are fairly rigid, susceptible to damage and difficult to repair. However, scientists are determined to (literally) give them thicker skins. They've experimented with soft, deformable circuits that are flexible, and could reduce business expenses in the long term -- but are still prone to tearing and puncturing. The solution to these issues may lie in one recent advancement.

A group of researchers from Carnegie Mellon University have found a way to counter surface damage and electrical failure commonly observed in soft materials used in engineering robotic electronics. Like previous efforts, it involves a certain kind of polymer. To create a material that is both flexible and resistant to damage, Carmel Majidi and his team inserted liquid microdroplets of a gallium-indium based metal alloy into a soft, elastomer shell.

Essentially, it's a solid-liquid hybrid that is stretchable, electrically insulating and capable of auto-repair even when damaged multiple times. Where most other self-healing soft electronics need exposure to heat, increased humidity or manual reassembly to get back to health, the metal-elastomer composite heals itself by forming new electrical pathways.

Majidi says the inspiration behind the composite material comes from the nervous system's ability to regenerate itself. It isn't mimicking neuroplasticity entirely, though; while the metal-elastomer could be useful in wearable computing and inflatable airships to protect electrical wiring from potential damage, there's no such protection for mechanical or structural damage. That's the eventual aim -- creating a material which helps robots weather both electrical and structural defects and, like Astro Boy, interact with humans more safely.

In this article: elastomer, polymer, robots, selfhealing, tomorrow
All products recommended by Engadget are selected by our editorial team, independent of our parent company. Some of our stories include affiliate links. If you buy something through one of these links, we may earn an affiliate commission.