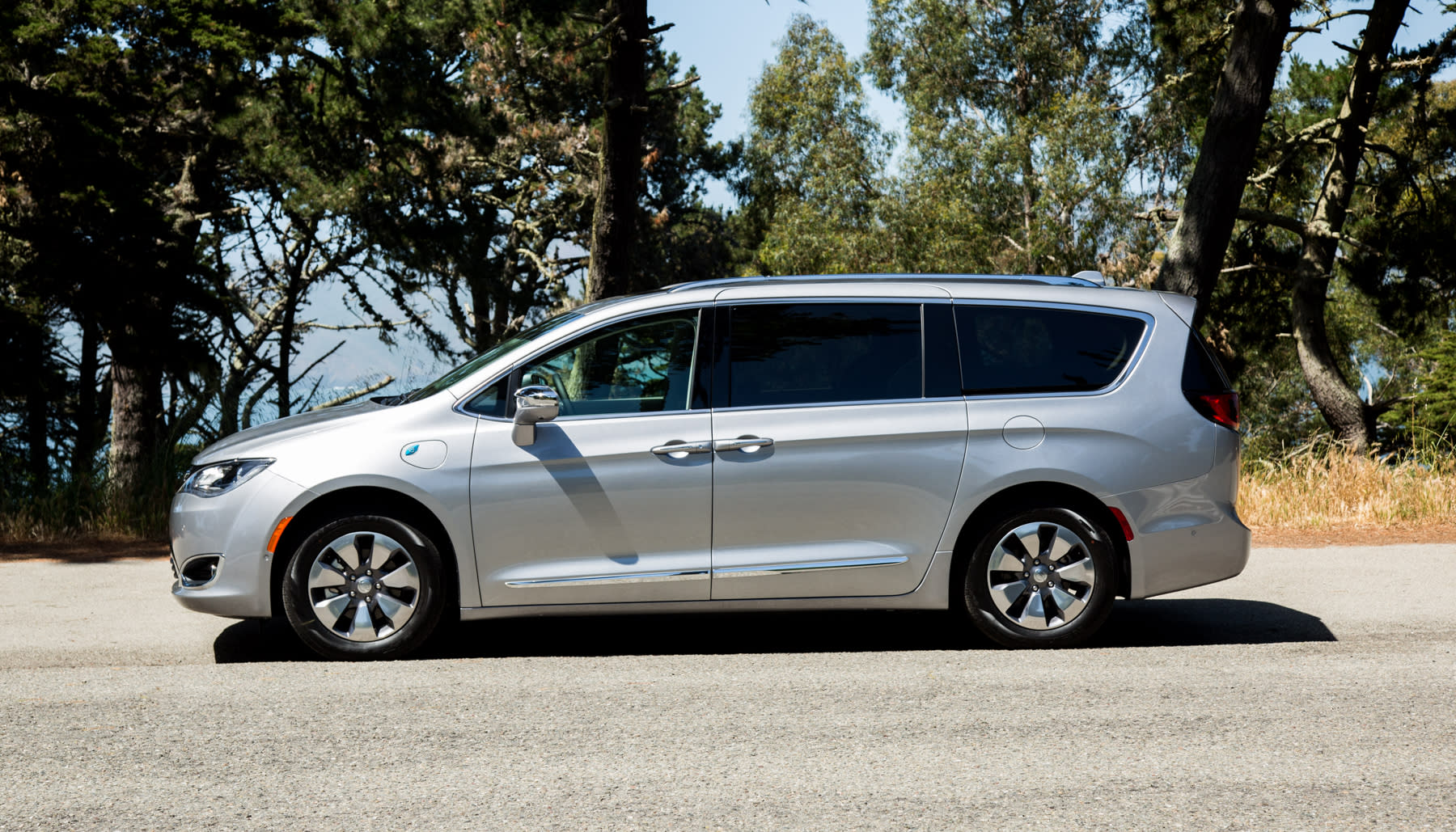 Chrysler makes a case for the hybrid minivan

No one marvels at minivans. Well, except maybe at car-stereo events (you can get so many woofers in the back of a van). But in real life, on the streets, the world treats the minivan like a defeat: It's what you buy as an adult when you've given up all hope. Your youth has died, the body has been cremated and its ashes have been mixed with Metamucil and spread at the entrance of a chain restaurant (probably an Applebee's).

That's unfortunate, because the Chrysler Pacifica Hybrid does a better job handling what most people want out of the SUV. It's got third-row seating, a solid infotainment system, room for nearly all of your stuff and great mileage. It also has a comfortable ride, even though the seats could use an upgrade.

Behind the wheel of the Pacifica Hybrid, in EV mode the ride and acceleration are impressive. Like most hybrid vehicles, when it's running on battery-only power, the acceleration is smooth, quick and quiet. Chrysler was able to pair that with a suspension that curbs the body roll and bouncy-house feel of older minivans. Instead you get an experience that's closer to an entry-level luxury SUV than a van.

On the freeway, the hybrid propulsion system helps get the van up to freeway speeds easily. With a depleted battery, hitting 65 miles per hour takes a bit longer, but it's nothing that should weigh on the minds of would-be buyers.

When the Pacifica Hybrid does have a full battery, Chrysler says it can go 33 miles on a charge. In my tests I got about 25 miles between charges, which is pretty good considering how hilly the San Francisco Bay Area is. Sure, you get some extra charge going downhill, but pushing up those inclines is an energy killer.

But even though the Pacifica is a hybrid, it doesn't have selectable modes. In other words, you can't manually put it in EV or save the battery mode. That's fine around the city, but I would have liked the option to save the battery during long highway drives, which drain battery power pretty quickly.

Whether you're driving the van in the city or on the interstate, Chrysler has made sure to keep the tech inside the van up to date. The Uconnect infotainment system is easy to navigate without too many submenus while also supporting Android Auto and Apple CarPlay. Plus you can drag and drop your favorite features to the bottom of the screen for quick access. The 8.4-inch touchscreen is also one of the brightest I've seen in a car in some time; it cut through any glare that may have washed out the display.

Sadly, the seats need an upgrade. They're harder than you would expect from a vehicle that's built for road trips and long days running errands. For the folks in the back, there is at least a diversion to the seats. All told, the second-row rear passengers have access to two touchscreen displays that offer up the option to watch videos via a Blu-Ray player or HDMI input. Plus, there are games like Sudoku and Solitaire on the screens in case you get sick of watching Frozen for 2,348th time because someone keeps forgetting to bring different movie on road trips.

As mentioned earlier, the car comes with third-row seating. Thanks to the sliding doors and lower floor level than a large SUV, it's easier to get in and out of all the back seats. If you need more storage than seating, with the pull of a cord and some quick folding, that third row disappears into the floor of the Pacifica. Sadly, because of the hybrid battery, the second-row seats don't stow and go into the floor. Instead you have to pull them out of the van. It's not difficult, but it's not exactly easy either. It took me a few minutes and some cursing to figure out the best way to pull out the chairs.

But even with the second row still in the minivan, there's an incredible amount of room in the back. And thanks to the split between the two middle seats, I was able to shove one of my surfboards into the car with room for, well, everything else I own that's "outdoorsy." Trips to locations where you want to haul people and stuff like Costco, Home Depot, soccer practice, the beach and even Burning Man should be no problem with this van. 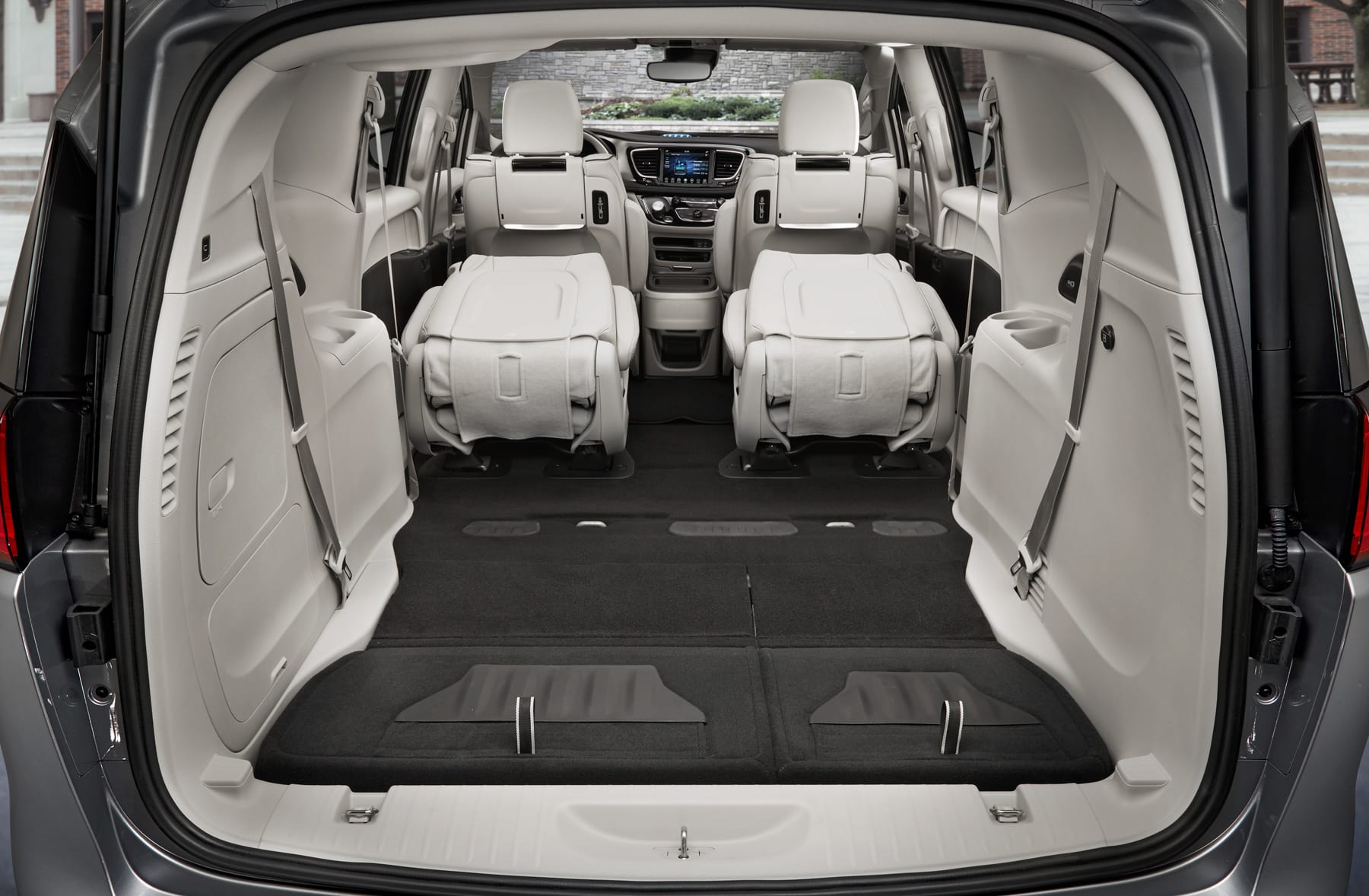 Another win for the minivan is that since it's lower to the ground than a typical large SUV, it's easier to load all of your stuff. Frankly, most people never use the ground clearance found on SUVs since a majority of those vehicles never make it off road. Why deal with the hassle of lifting things higher when there's a van on the market that will carry even more of your stuff and won't strain your lower back?

The Chrysler Pacifica hybrid has a lot going for it: great gas mileage, impressive EV-only range, tons of room, an excellent tech suite and a ride that's better than expected. But it has one giant mark against it: It's a minivan, and it looks the part. But maybe if you're in the market for an SUV you'll take a few moments to consider the Pacifica Hybrid. It won't look as cool sitting in your driveway, but it's definitely not the surrender of your youth (that happened a long time ago). Instead choosing the Pacific is a case of logic over peer pressure. It's kind of like you're a rebel. A rebel with a van.

All products recommended by Engadget are selected by our editorial team, independent of our parent company. Some of our stories include affiliate links. If you buy something through one of these links, we may earn an affiliate commission. All prices are correct at the time of publishing.
View All Comments
Chrysler makes a case for the hybrid minivan