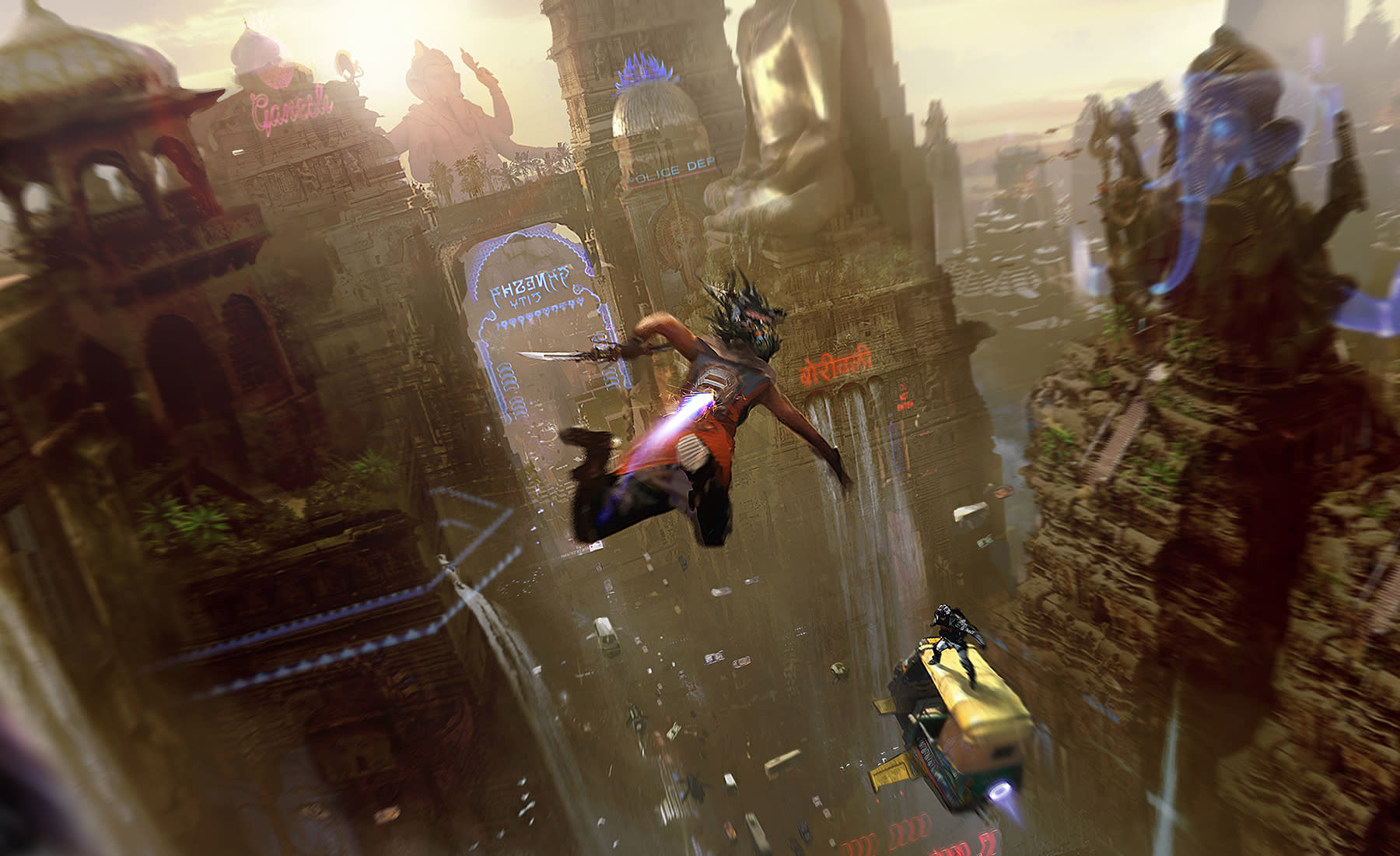 Beyond Good and Evil 2 is a game that exists. Or at least, there's something that's playable inside Ubisoft's office. During a behind-closed-doors presentation, some of the team showed off a playable demo on a planet called Soma. It revolved around Ganesha City, the bustling metropolis that featured in last year's cinematic E3 trailer. Two players, working cooperatively, started in an underground temple riddled with mercenaries working for nefarious corporations. The team showed off the basic controls -- you have a sword, gun and some swappable powers, including a time-slowing bubble -- before dispatching their foes in record time.

The combat looked a little slow and robotic. The game, though, is clearly in an early state, so I don't want to knock what will likely be improved. We were also shown a scanner -- much like the Detective Mode in Batman: Arkham Knight -- which revealed what powers each enemy had equipped. That will be crucial, the team said, when choosing abilities and the best way to take down groups. Once everyone had been vanquished, the two heroes walked into a makeshift hangar and boarded two vehicles -- a gleaming spaceship and a ramshackle hoverbike -- before flying outside.

Ganesha City is based in a continent called New India. The obvious inspiration can be seen in the temple-like architecture and colorful murals painted on skyscraper sized walls. There weren't too many streets, or pedestrians, but the flying traffic made it feel like a real, lived-in world. While the demo was underway, some of the Beyond Good and Evil 2 team explained the game's lore. In short, the first colonists were exposed to radiation that made them infertile. Almost everyone in the system is, therefore, a clone built for a specific purpose. You, however, decide to break out and become a legendary space pirate captain instead.

It's an interesting premise, but also a convenient one for offering a limited number of character types. The team stressed, however, that there will be extensive customisation options to help you stand out from other humans, hybrid monkeys, or whatever base species you choose. During this explanation, one of the team members switched on a pirate radio station that will be accessible throughout the game, similar to Grand Theft Auto or SSX 3. It was an original hip hop track performed by a fictional primate and filled with references to the Beyond Good and Evil 2 universe.

The radio station is one of many ways that fans will be able to contribute their own art to the game. During its E3 press conference, Ubisoft announced a partnership with actor Joseph Gordon-Levitt's collaboration platform HitRecord. The team is looking for original music and artwork and will pay creators for any assets that are used in the final game. It's a neat idea, though some have criticized the system because it pushes people to do work with only the possibility of getting paid. Roughly $50,000 has been allocated for HitRecord assets, which is undoubtedly cheaper than a team of Ubisoft artists.

Later in the demo, the Beyond Good and Evil 2 team showed some light aerial combat. Each ship had the standard missile and machine gun loadout, though one developer stressed that they would also have fantastical power-ups in the final game. During the presentation they also showed an array of ship customization options, which includes vibrant colors, decals, and patterns. Finally, the two characters flew away from the city and up toward the planet's stratosphere. Soma looked fairly barren, with only a couple of cities and question mark locations. The final version, however, will supposedly have more places to investigate and mine for precious resources.

The demo ended with the two characters boarding a larger space pirate ship. Notably, there wasn't a single loading screen throughout the presentation. That alone was impressive, though I came away concerned with the scope and ambition of the project. The original Beyond Good and Evil took place on a single planet (okay, and a lunar base). Beyond Good and Evil 2 is promising a vast galaxy to explore. What they've built so far feels faithful to the original game, but they will have to make much, much more to deliver on their pitch of a space pirate saga.

In this article: art, beyondgoodandevil, beyondgoodandevil2, e32018, gaming, hands-on, Ubisoft
All products recommended by Engadget are selected by our editorial team, independent of our parent company. Some of our stories include affiliate links. If you buy something through one of these links, we may earn an affiliate commission.