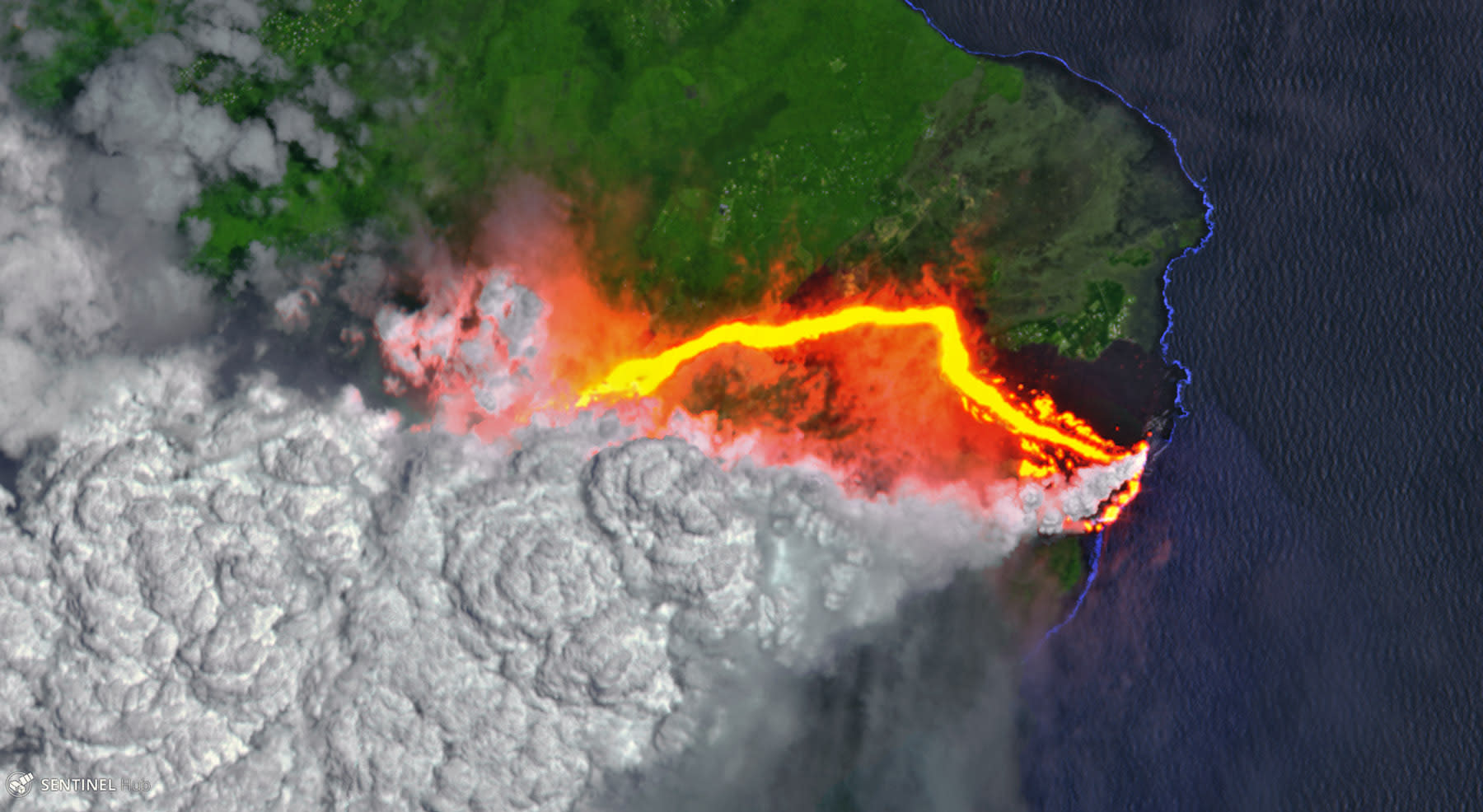 The drama and fury of Kilauea's volcano from space

Hawaii's Kilauea Volcano is causing all kinds of havoc. So far, it's wiped out at least 600 homes including a neighborhood called "Vacationland," completely filled in Kapoho Bay and rained olivine gems from the sky. Now, its destruction has been caught by the ESA Copernicus satellite Sentinel-2B (in visible and infrared light) with some dramatic enhancements from photo and geography enthusiast Pierre Markuse.

The image shows lava flowing directly from the volcano nearly Kapoho and Vacationland and emptying directly into the sea near the Kapaho village and tidepools, creating an enormous plume of steam. What draws the eye most, of course, is the lava flow itself, which appears to glow a bright orange. That's not exactly what the satellite, or your naked eye really sees, however.

To create the above image, Pierre Markuse pulled images from ESA's Sentinel-2B satellite. Part of the Copernicus imaging program, it can deliver high-resolution images down to 10 meters (33 feet) in 13 spectral bands from 443 to 2190 nanometers, including visible, near-infrared and shortwave infrared (SWIR) bands. Using a special script (available to anyone who wants to try it), Markuse combined visible light to show the steam and topography, with SWIR bands that highlight the eruption plume and lava flows. Afterwards, he did a touch of color correction so that everything looked more natural. The visible light image, shown above, doesn't reveal the lava streams at all, but you would certainly see them glowing orange from ground level.

So, while the image is certainly manipulated, it does reflect the reality of the situation. "This way, the SWIR emission caused by the heat of the lava show up brightly and create a nice visualization of the lava flow," Markuse told Engadget. You can also use the script to create a SWIR overlay that shows the precise track of the lava overlaid onto a regular map, as shown here.

Despite the many, many dramatic images of the lava flow and fissures that we've seen since Kilauwea started erupting on May 3, Markuse's false color satellite image really brings the scale of the disaster home. As it stands now, hundreds of residents (including the Big Island's mayor) have lost their primary or secondary residences. The floor of the volcano has collapsed by 300 feet, and thousands of earthquakes have shaken the island. And as it stands now, there's no end in sight to the destruction.