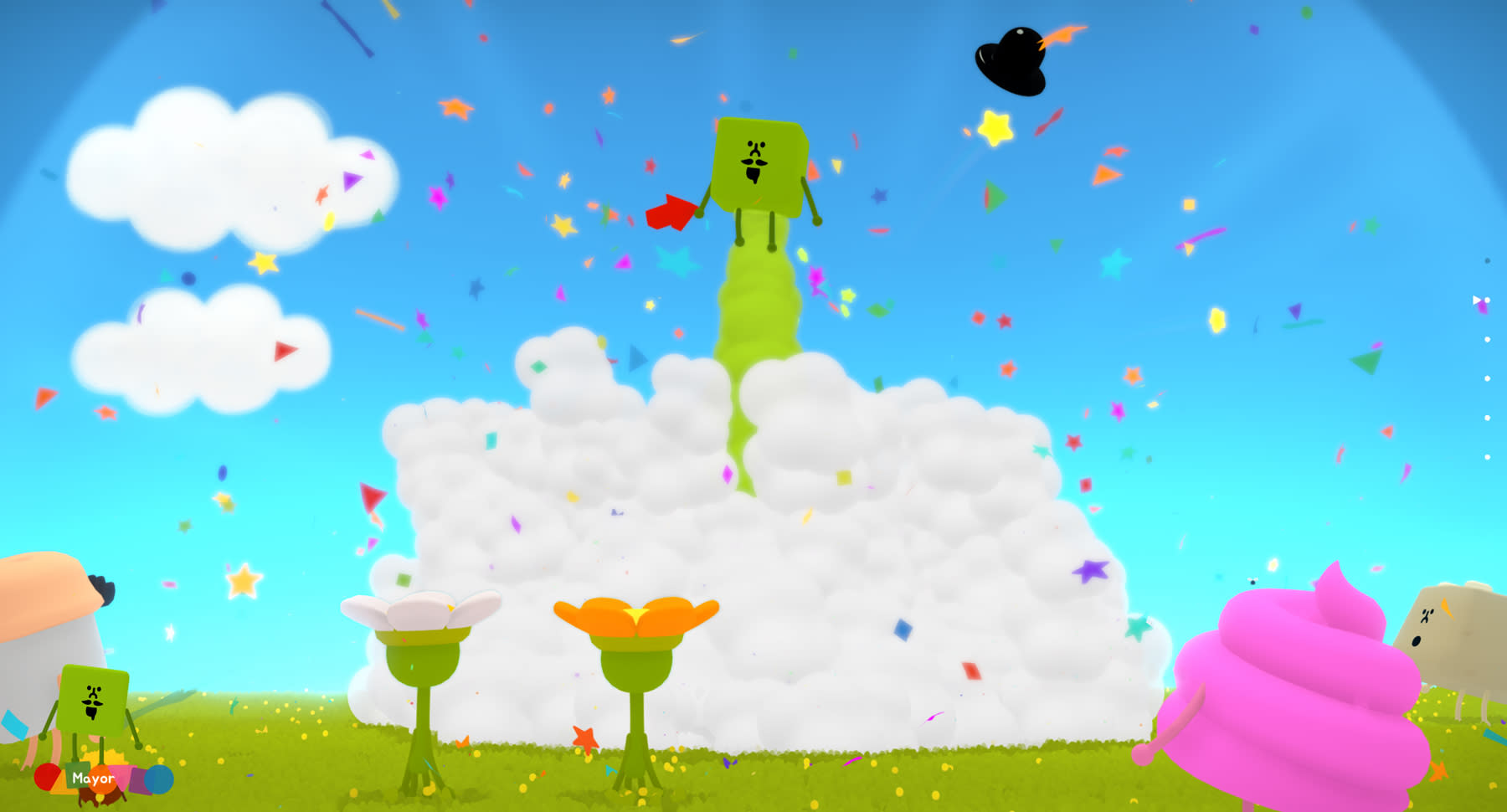 'Wattam' is a wonderfully weird game about friendship

Keita Takahashi is an unusual video game designer. His breakout hit, Katamari Damacy, was about picking up objects with an increasingly large, sticky ball. He then made Noby Noby Boy, a game about a colorful, worm-like creature that can stretch around animals, houses and planets. Now, the artist is working on Wattam, a light-hearted puzzle game about a little green mayor and his quest to find a group of long-lost friends. It's a wonderfully weird experience that doesn't fall into any conventional game genre — and that's just fine by me.

At E3 2018, I played a brief demo with Takahashi as my helpful guide. It started with a short cutscene that explained how "a long time ago, everything existed in this world. But then... everything was lost." I then took control of the mayor and waddled over to a small stone that, I soon discovered, is one of the world's missing residents. A few introductions later and I was given the ability to switch characters with the right analog stick. I was then shown how to create a magic bomb with the Mayor's black bowler hat. Triggering these innocent explosions will delight other people and, sometimes, persuade them to perform helpful actions for you.

Before long, I had a small group of smiling creatures wandering around my grassy world. Recruiting new residents, though, started to become more difficult. At one point, for instance, I had to make my entire group hold hands (the square and circle buttons control each arm) and jump around in a clockwise motion. Another time, I needed to retrieve a missing telephone receiver from the sun — first by stacking creatures vertically, then by helping a balloon overcome their fear of heights. Later in the demo, I even used an onion to make two eyelid characters weep a small ocean.

They're light puzzles, sort of. "I'm not sure I can use the word 'puzzle,' for this game," Takahashi laughs. The artist finds it difficult to describe his latest project. It's clear, though, that he wants to build a game that doesn't rely on hyper-realistic violence for entertainment. "Almost all games are doing, like, a battle," he said with a sigh. "Fighting, beating enemies. But I believe that is not the only thing that games can provide us. There is something else, a new way to get a sense of fun and enjoyment. I'm still trying to figure that out, the things that only games can provide us."

Wattam is the polar opposite of Battlefield V, The Last of Us: Part II and Call of Duty: Black Ops 4. It was born out of Takahashi's frustration with the various conflicts and humanitarian crises brewing around the world. 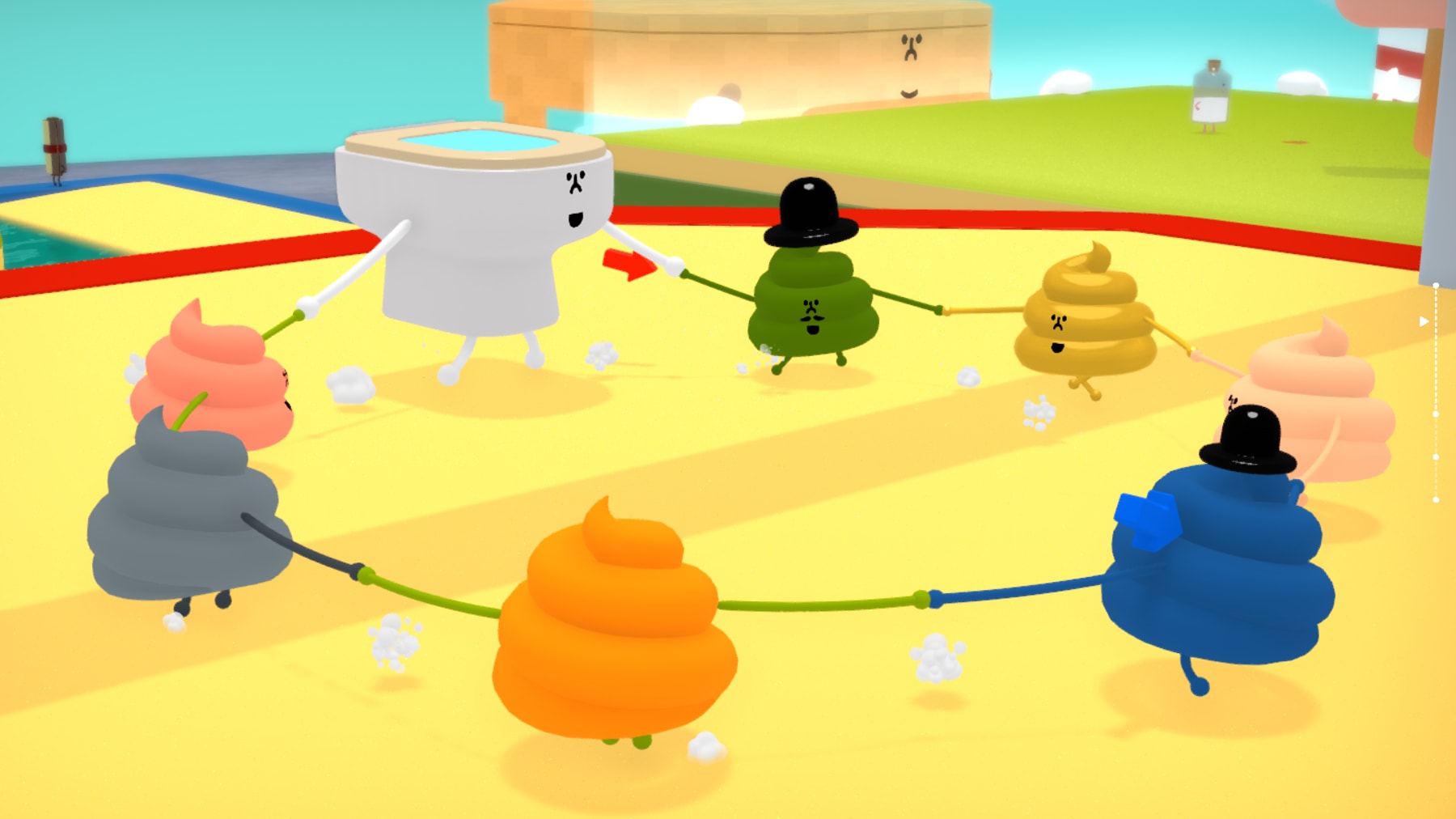 "For me, this world, there's something missing," he said. "We fight each other in places like Africa and Europe. But those fights, and conflicts, mostly come from our differences. Different skin colors, religions, countries, languages, and perspectives. I understand why these people fight each other, but it feels silly, and stupid. We are human beings, living on the same planet. Why do we have to fight each other? I just wanted to try making something that somehow means we can get over our differences. In a funny way, though, which is colorful explosions for me."

Through this lens, Wattam and its colorful characters, which span fruit, furniture and human body parts, take on new meaning. It's a celebration of life, our planet's diversity, and the simple act of helping strangers. As the demo progressed, I was given the ability to zoom out and control increasingly large characters. The scale is reminiscent of Katamari Damacy, which took you from a beach ball to a planet-sized sphere. In Wattam, though, this overview feels more important. It gives you a different perspective of a world filled with vibrant and constantly evolving beings.

Wattam is a playful game brimming with bonkers imagination. Players young and old can appreciate the experience on a surface level -- a wonderfully weird town builder, with a toilet that can turn people into poop -- or embrace its deeper message. Takahashi doesn't mind which way the game is processed, provided the person playing it feels something. "It would be nice if they sort of change somehow," he said, "in a nice direction." A simple goal, perhaps, but one that's more relevant than ever.