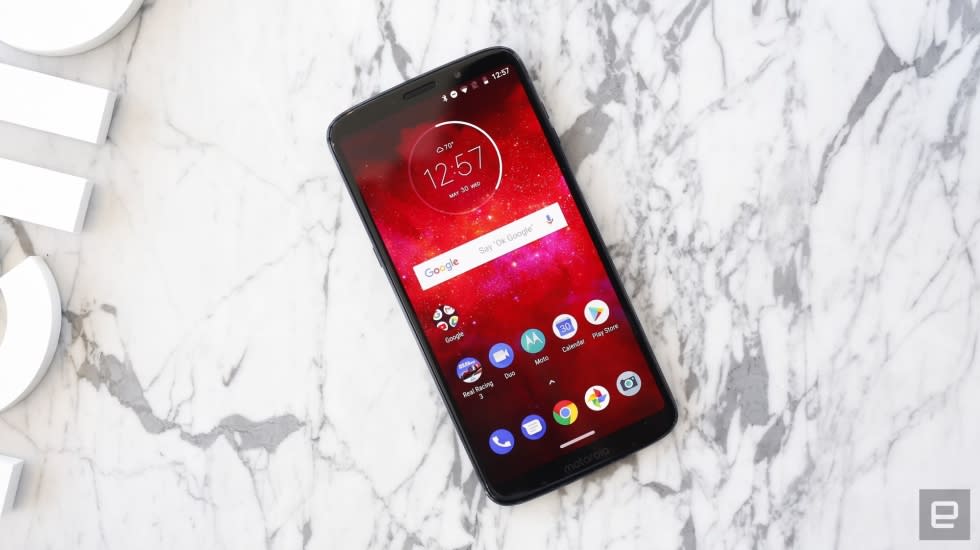 Amazon already has quite a few Motorola phones in its Prime Exclusive roster, and now it's adding two more to its lineup. The e-commerce giant now offers the Moto G6 Play and Z3 Play as unlocked, Alexa-enabled devices that you can use with Verizon, AT&T, T-Mobile and Sprint lines. You can summon Alexa on both phones by double pressing the power button when they're unlocked or, if you set it as the default assist app instead of Google Assistant, by a long press on the home button. For a limited time, you can also get a free Moto Smart speaker with a Z3 Play, so you can access the voice assistant hands free.

If you'll recall, the Moto G6 Play is the more affordable version of the regular G6 launched in April. Its processor is less powerful than its more expensive sibling, and it has a traditional 13-megapixel rear camera instead of the G6's dual camera, but it's also $50 cheaper. G6 Play's Prime version slashes a few bucks off that price, as well, and will set you back $190 (the non-Prime version is $199). If you want a more premium phone, though, the Moto Z3 Play might be the better choice for you. It has a 6-inch Full HD+ Super AMOLED display, dual 12MP and 5MP rear-facing cameras and an 8MP front-facing camera. The Prime version costs $50 less than its regular counterpart and will set you back $450.

Like all other Prime phones, these two come pre-loaded with Amazon's apps, not just Alexa. Those include Prime Video, Prime Photos, Prime Music -- simply put, they make it easier to access all features that come with Prime membership. Yes, you'll need to shell out for Prime's $119 membership fee to be able to get one of its subsidized phones. Thankfully, they no longer come with lockscreen ads, so they won't feel like they're not really yours.

In this article: amazon, amazonprimeexclusivephone, g6play, gear, mobile, moto, motorola, primeexclusivephones, primeexclusives, z3play
All products recommended by Engadget are selected by our editorial team, independent of our parent company. Some of our stories include affiliate links. If you buy something through one of these links, we may earn an affiliate commission.