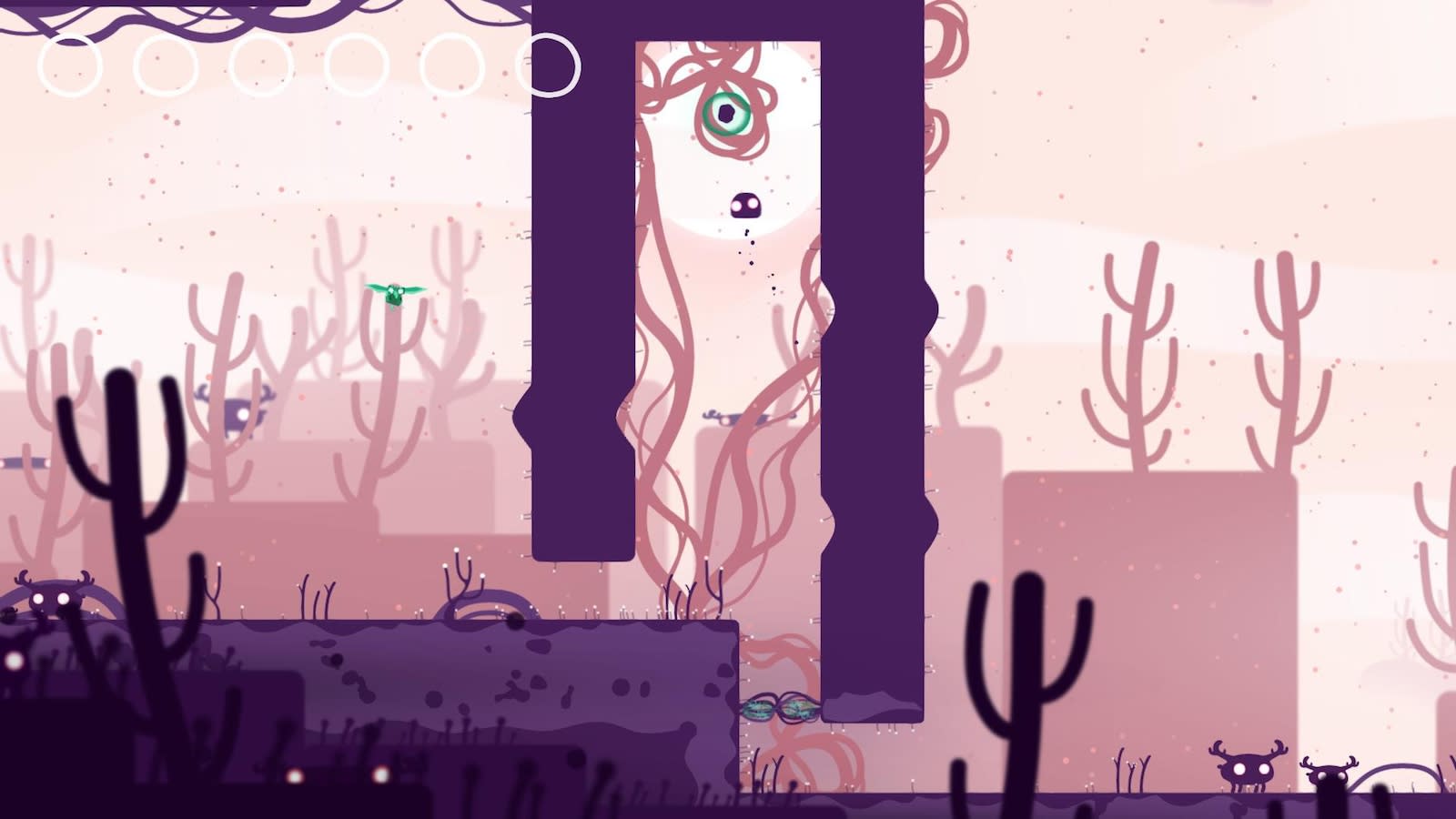 This is the first South African game on a Nintendo console.

I found Semblance on the second floor of the Fuego Lounge, squeezed into a booth beside a dance floor and a small stage. It was early afternoon, and waitstaff were restocking the long, rectangular bar in the center of the room as game developers, press and PR handlers flitted from station to station. A cloth tent on the balcony offered psychedelic VR meditation; a geodesic dome on the roof showcased swirling galaxies. And all along the walls inside, indie games waited to be played.

Semblance stood out among the row of screens for its energetic, purple-tinged visuals. It's a platformer starring an adorable bouncing blob named Squish, and it's heading to PC, Mac and Nintendo Switch this year. Its conceit is innovative and also glaringly obvious: It's a platformer where players actually create platforms as they go. Squish is able to distort the world, building tall ledges or deep indentations in the ground in order to solve a series of tricky spatial puzzles. Everything about the game is at once super cute and filled with mystery, from the squashy, haunting sound effects to the cartoonish yet deep background animations. Semblance was part of Indie Heaven, a showcase hosted by Good Shepherd Entertainment during E3, held inside an abandoned building directly across the street from the Los Angeles Convention Center. Programmer Cukia "Sugar" Kimani and designer Ben Myres spent their days showing off Semblance to the media and their nights partying on the roof with other developers.

"If you're not traveling a ton, you're not going to be able to make it."

The fact that Kimani and Myres were even in LA, let alone dancing all night on a roof in the heart of the city, was nothing short of a miracle. Their studio, Nyamakop, is based in South Africa, and Semblance is the first South African game to ever make its way to a Nintendo console. It's nearly the first African game, full stop, to hit a Nintendo platform: Ubisoft Casablanca worked on N64 ports out of Morocco, though it never developed an original IP for Nintendo on the continent.

"The entry curve into being an indie game developer in South Africa is like a cliff face," Myres said, sitting next to Kimani in his booth as the Semblance trailer flashed on a screen in front of them. "Because you don't have the contacts, the platform holders like Xbox, Sony."

"You don't have events near you," Kimani added.

"You don't have reps that live in your country," Myres said, nodding. "The press that matter are all here. There isn't a big enough market locally to sell to, so you have to make works to sell to the West, which means you have to go to Western shows and you have to meet Western press. So basically, if you're not traveling a ton, you're not going to be able to make it." Kimani and Myres have definitely been traveling. A ton. Over the past 18 months, they've made it to 20 cities, and they recently hit five continents in the span of three weeks.

"That's what we've had to do," Kimani said. "It's been pivotal. And the thing is for us as African devs, it's really hard because it's costly, very costly."

I asked how they made it work, financially.

In practice, the Nyamakop developers have become experts at asking for help and bootstrapping their way around the world. Good Shepherd, their publisher, offsets some of their costs, and they've found partners in events like the XPO Game Festival in Tulsa, Oklahoma, and IndieCade in Los Angeles.

"And then we went to Stugan, which is the indie retreat," Myres said. "Two months, cabin in the woods. Straight from seeing you at E3 [2017], we went to this festival that paid for us to be there in, like, Tel Aviv, to pay for us to go there. And then from Tel Aviv we could go to Sweden. But when were in Sweden, I didn't even have a flight home. That's the level we were at."

Luckily, some money showed up just in time for Myres to get home. These trips weren't (just) for fun -- Kimani and Myres used these opportunities to spread the word about Semblance and meet up with potential publishers and distributors.

When they started working on Semblance, the Nintendo Switch didn't exist, but today it's the leading platform in all of the game's marketing materials. This relationship spawned out of Nyamakop's ability to hustle and take chances: In 2017, Kimani and Myres spotted a Nintendo developer representative on a Facebook group and slid into his DMs. They arranged to meet up at the Game Developers Conference in San Francisco and show off their game.

Minutes before they met up with the Nintendo rep, Semblance crashed. They rushed to get it back up and running, and before long, they were crouched on the sidewalk outside a restaurant, showing off the game to someone who could get it on Nintendo's new console. Myres used his body to block the glaring sun as Kimani ran through the demo on a laptop.

It worked. The rep asked for details, and Semblance ended up on Switch. This is a shift from pre-Switch Nintendo culture, which was largely closed to indie developers. Today, Kimani and Myres said, Nintendo reps are everywhere, looking for games that the Switch can gobble up.

"We have met so many reps at events now from Nintendo, from America, from Europe," Myres said. "They're really going out there and looking for stuff. They're, like, really finding games."

"And the most poetic thing about us working on the Switch is that the first time we ever got to show the game on Switch was in Kyoto, Japan," Kimani said. "At BitSummit, where we won an award."

BitSummit is an indie-game festival that's been held in Kyoto for the past six years, and the 2018 edition wrapped up in mid May. Semblance picked up an award for Excellence in Game Design. Though Semblance is the first South African game on a Nintendo platform, it doesn't showcase any African-specific scenes, and that was entirely on purpose.

"It's our first game," Myres said. "And we'd love to make more African-based content, but we really wanna know how to sell something accessible to the West first. 'Cause you know our dream is to make stuff like District 9, which is consumed by the West but it's just incidentally set in South Africa."

Semblance is set to hit Steam and Switch this year. Kimani and Myres wouldn't give an exact date, but they promised to slide into my DMs with a release date "soon."

All products recommended by Engadget are selected by our editorial team, independent of our parent company. Some of our stories include affiliate links. If you buy something through one of these links, we may earn an affiliate commission. All prices are correct at the time of publishing.
View All Comments
'Semblance' is proof of Nintendo's new indie hustle