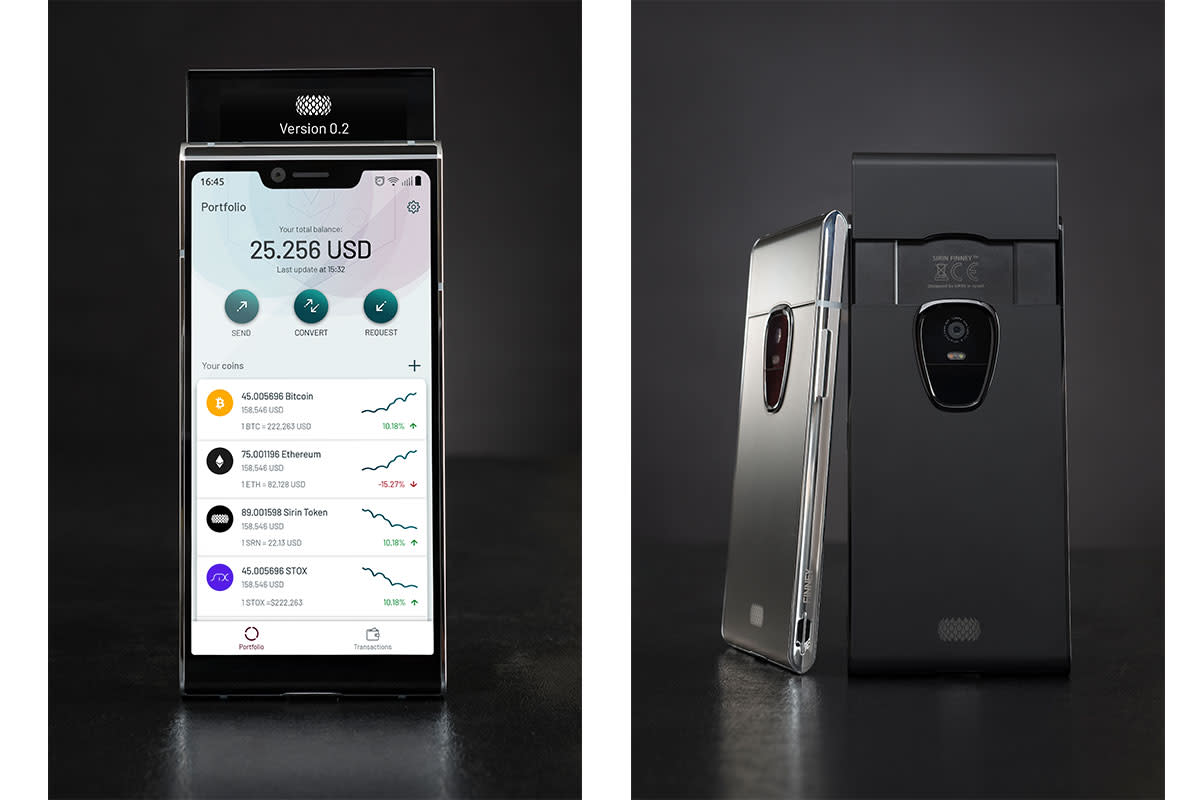 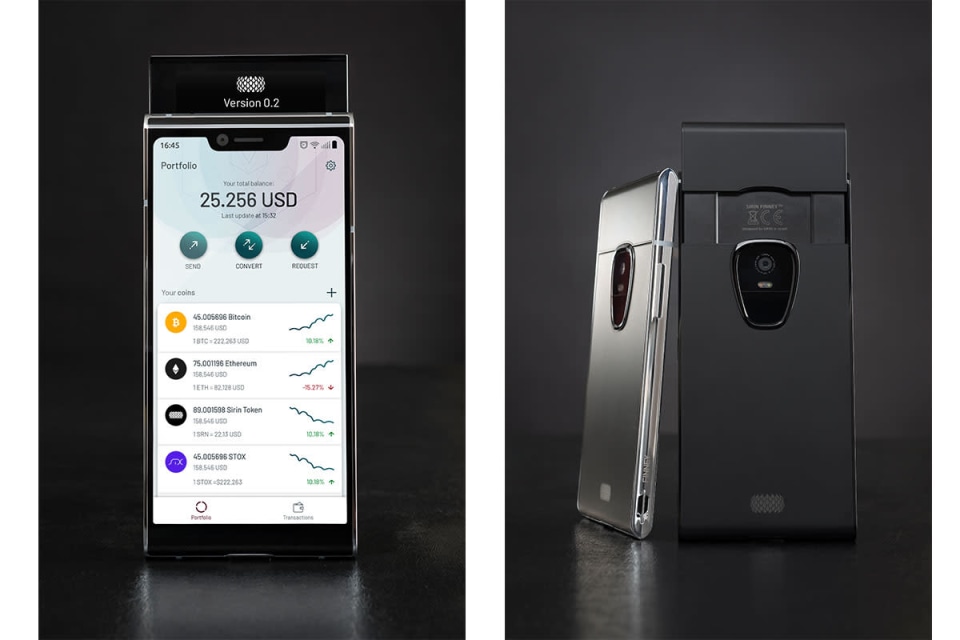 There are only a handful of cryptocurrency-related smartphones in the works, but Sirin Labs thinks that it has the best. The company most famous for the $14,000 Solarin privacy phone is back to launch the Finney, a device for the blockchain crowd.

The Finney is named after Bitcoin pioneer Hal Finney, and is described as a "state of the art mobile device" for the "blockchain era." The handset bears a passing resemblance to its predecessor, but aside from one pretty nifty hardware feature, it's what's inside the phone that counts.

At first blush, the Finney clearly comes from the same company as the Solarin, even down to the teardrop camera frame. But here, the top fifth of the backplate now slides up in a manner that's reminiscent of an old Nokia slider.

Pull out the back and you'll find a secondary display, called the Safe Screen, that's only used for crypto transactions. The company says that the Safe Screen runs on dedicated firmware that lets users check where their coinage is being sent before they pay. The slider also activates the cold storage wallet that is designed to hold a significant number of different cryptocurrencies.

The Finney is running on a forked version of Android that, much like with the Solarin, the company promises has been made significantly more secure. It will need to be, too, since the phone offers access to a specific blockchain-related app store and the aforementioned cold wallet. Specs-wise, as outlined previously, the handset is running with flagship specifications, including a Snapdragon 845 and 6GB RAM.

The other notable feature, however, is Token Conversion Service (TCS), which is way to overcome the Balkanized nature of cryptocurrencies. Since so many coins are launched on a regular basis, it's hard to know where to place your money. TCS, however, acts as a form of automatic broker, exchanging your SRN coins into the tokens necessary to carry out a specific purchase.

Amit Krelman, Sirin's head of R&D, explained the idea using the notion of a blockchain-focused equivalent to Uber. Rather than having to stand, in the rain, buying tokens to hire a car, TCS will handle all of it for you, automatically. He was less clear, however, on how exactly the system would handle long transaction times and processing fees, an issue that plagues Bitcoin users on a regular basis.

Of course, carrying all of your cryptocurrency around with you on your phone seems rather unwise given the risk of theft. It's a point that Sirin CMO Nimrod May believes is a misunderstanding about how folks would use crypto in the real world. He said that users would simply load their Finney with the quantity of coinage that they'd need that day, and leave the rest in a secure location at home. That seems like far more effort than simply carrying a credit card around -- and that has the added benefit of fraud protection.

Whereas the Solarin was produced by Flextronics in a Swiss factory, the Finney is being manufactured by Foxconn, mostly to help cut costs. Switching to a mass-market provider, according to Zvika Landau, was key in getting the handset's price down to $1,000. And there's clearly some level of demand for the device, since it raised close to $158 million at the end of last year.

That demand could increase, too, since it also signed up Lionel Messi as a pitch person at the end of 2017. The global soccer superstar will lend his name and face to the phone, same as he does for companies like Adidas, Gatorade, Pepsi, Ooredoo, Huawei, Hawkers, Tata Motors and... Mastercard. When the phone launches in November, we're hoping that Leo will turn up and do some ball tricks for our amusement.

In this article: Cryptocurrency, Finney, gear, mobile, Sirin, SirinLabs, Solarin
All products recommended by Engadget are selected by our editorial team, independent of our parent company. Some of our stories include affiliate links. If you buy something through one of these links, we may earn an affiliate commission.