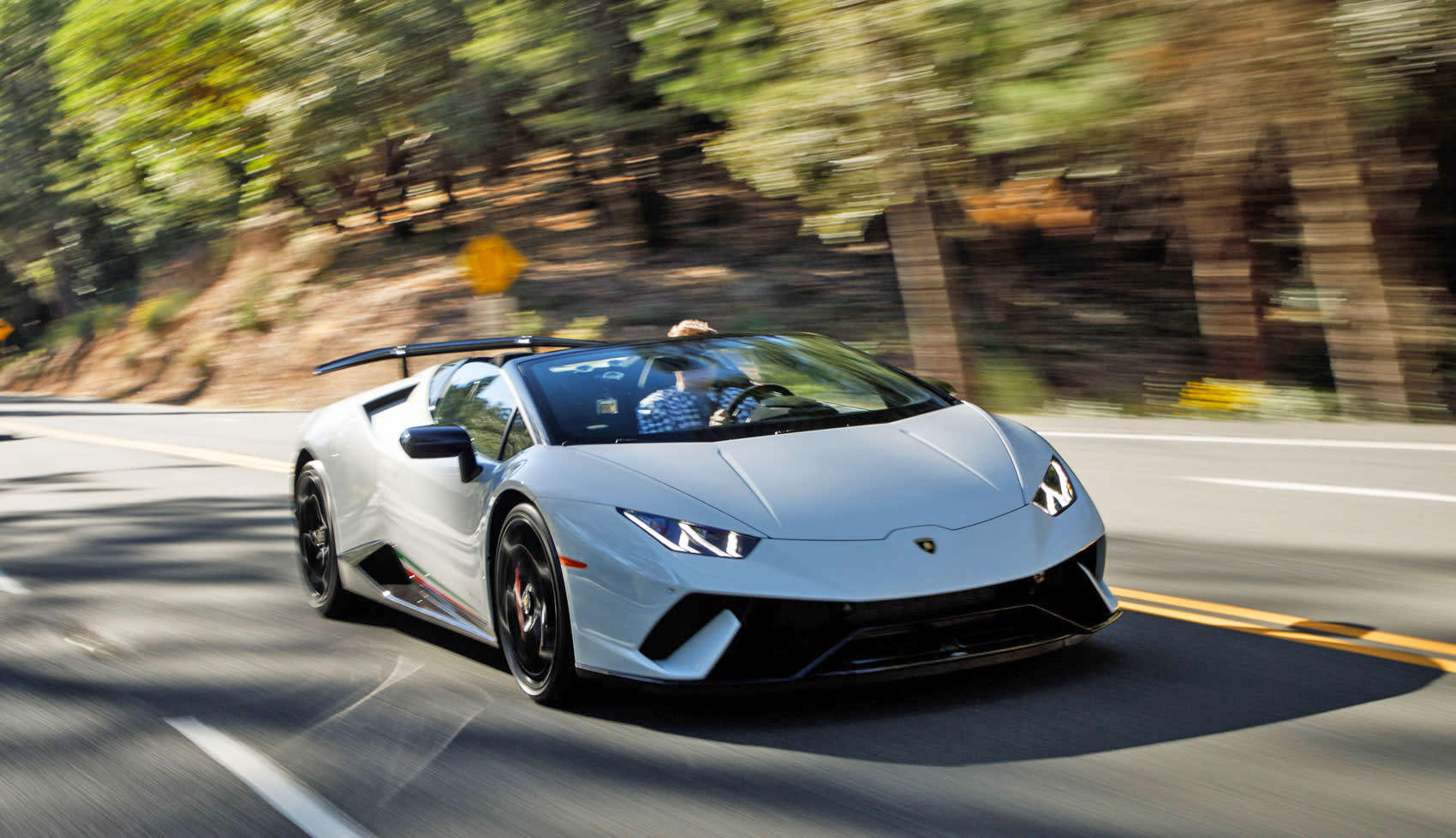 But none of us can afford it.

If you're a car person, you've at least looked at a Lamborghini and wondered, "Are they as awesome as the mystique around them?" Sure, they conjure up images of guys wearing too much cologne while blasting bad covers of popular songs over an EDM beat. Also, there's probably a gold chain thrown in there somewhere. If you toss aside that weird stereotype and really look at the vehicles coming out of Italy, you'd realize they're more than just fodder for posters. They're actually pretty remarkable.

​​​​​The 2019 Lamborghini Huracán Performante Spyder (starting at a savings-draining $308,859) looks like a Lamborghini supercar should. It has the aggressive angles you'd expect from the company that brought us the Diablo, Countach and Aventador. Plus it has the mid-engine power to back up that slightly insane design. Behind the seats is a 640 horsepower 5.2 liter V10 that'll go from zero to 62 miles per hour in 3.2 seconds. That's from a naturally aspirated engine. No turbos, superchargers or hybrid electric motor help.

Yes, the pure electric Tesla Model S P100D will do zero to 60 in 2.5 seconds for about $150,000 less than the Huracán Performante Spyder. But there's more to life than going fast in a straight line, and while the Tesla is full of semiautonomous tech, you would never dream of letting a robot drive a Lamborghini for you. The Huracán demands both hands on the wheel. Driving a Lamborghini is not a passive activity; it requires all your senses. Especially with a car that doesn't seem to lose traction. Believe me, I tried repeatedly to get it to break loose and I'll tell you know, it was tough.

You expect a supercar to stick to the road, but this Lamborghini uses an all-new active aerodynamics system called ALA (Aerodinamica Lamborghini Attiva) and it's very clever. Instead of adding a mechanically adjustable wing to the back -- which adds weight thanks to motors, levers and wiring, -- the Italian automaker created wind channels on both sides of the car. Air enters behind the cockpit, flows through the wing and exits via ports on the underside of the element.

Then Lamborghini added actuators to the channels that either let air flow through (reducing drag) or block it, creating downforce. The result is a system that can create downforce on the inside side of a car while it's cornering to increase traction.

For example, when you take a right turn, the left side of your car (the outside) dips while the right-hand side (the inside) lifts up due to centrifugal force. Lamborghini counteracts that lift by creating downforce with ALA by closing the right actuator in the wing, therefore, pushing the right wheel down.

Based on data from the car the ALA system opens and closes the actuator responsible for the downforce in half a second. Add in the car's AWD (all-wheel drive), and the result is a vehicle that chews through corners. Other than a single time when my co-driver got a small wiggle from the tires, the Huracán was firmly planted to the road. Which would have been great if I were shorter.

At six foot, three inches, I'm too tall for the car. While cornering I had to adjust my right hand because it would hit my right knee. It's a bit disappointing that even if I won the lottery and decided to throw caution to the wind, the Huracán Performante Spyder wasn't built for folks like me. If you are rich and tall, it might not be for you, either -- if you enjoy any sort of leg room.

Besides the powerful engine, intense cornering and styling that's anything but subtle, Lamborghini also created its own carbon fiber for the Performante version. It's a forged carbon fiber that's actually molded instead of the typical layered technique. The result is the ability to create complex shapes. It's used in the wing, portions of the cab, the firewall and the front spoiler. This composite gives the Performante a 35-kilogram (77-pound) weight reduction over the regular Huracán Spyder.

The loss of weight is great, but the carbon fiber elements sort of look like there's dust on them thanks to the grey splotches throughout as if someone did a half-ass job cleaning them. After a few days you get used to it, but more than a few people commented on the "dirty" wing. 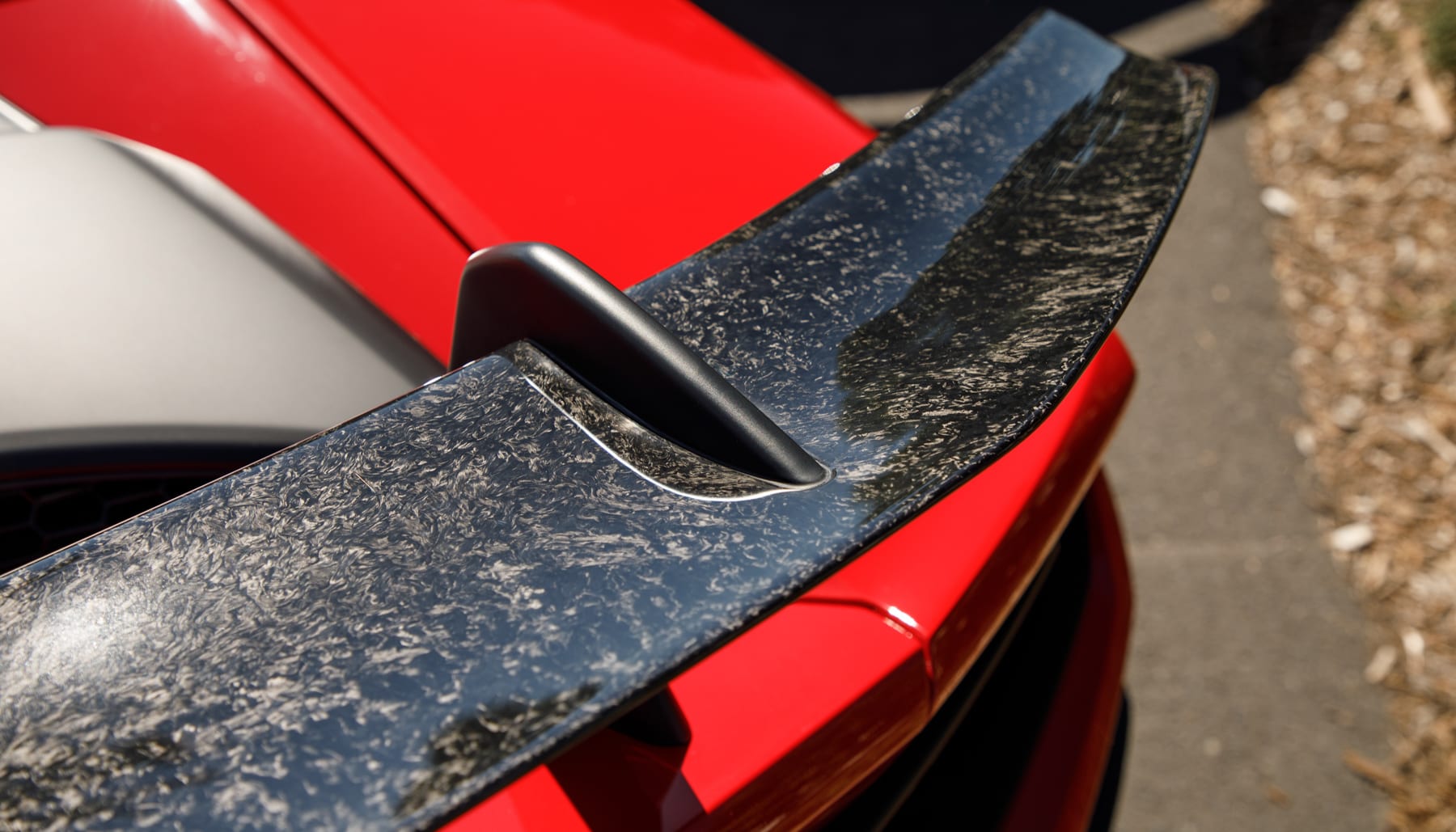 The upside is that when you're behind the wheel, you're so busy enjoying the experience of driving a supercar, you ignore the "dust." You even ignore the car's infotainment system that's really just navigation. The center console display is tiny and only big enough to show the ALA system or a digital oil pressure and temperature gauge.

So everything happens in the dash cluster instead. Including CarPlay support, which is kinda weird but also cooler than expected. It places all those CarPlay features front and center. The car's speed and tach are pushed to the side when it's running.

You can still use CarPlay features (like listening to music) without it taking over the dash. This also lets you see the different dash features of the different drive modes: Strada, which fine for driving around town; Sport, which does what the name implies; and Corsa, which is the car tuned to its limit. Lamborghini told us that Sport is for when you want to have fun and Corsa is when you want to drive at the edge of your abilities. 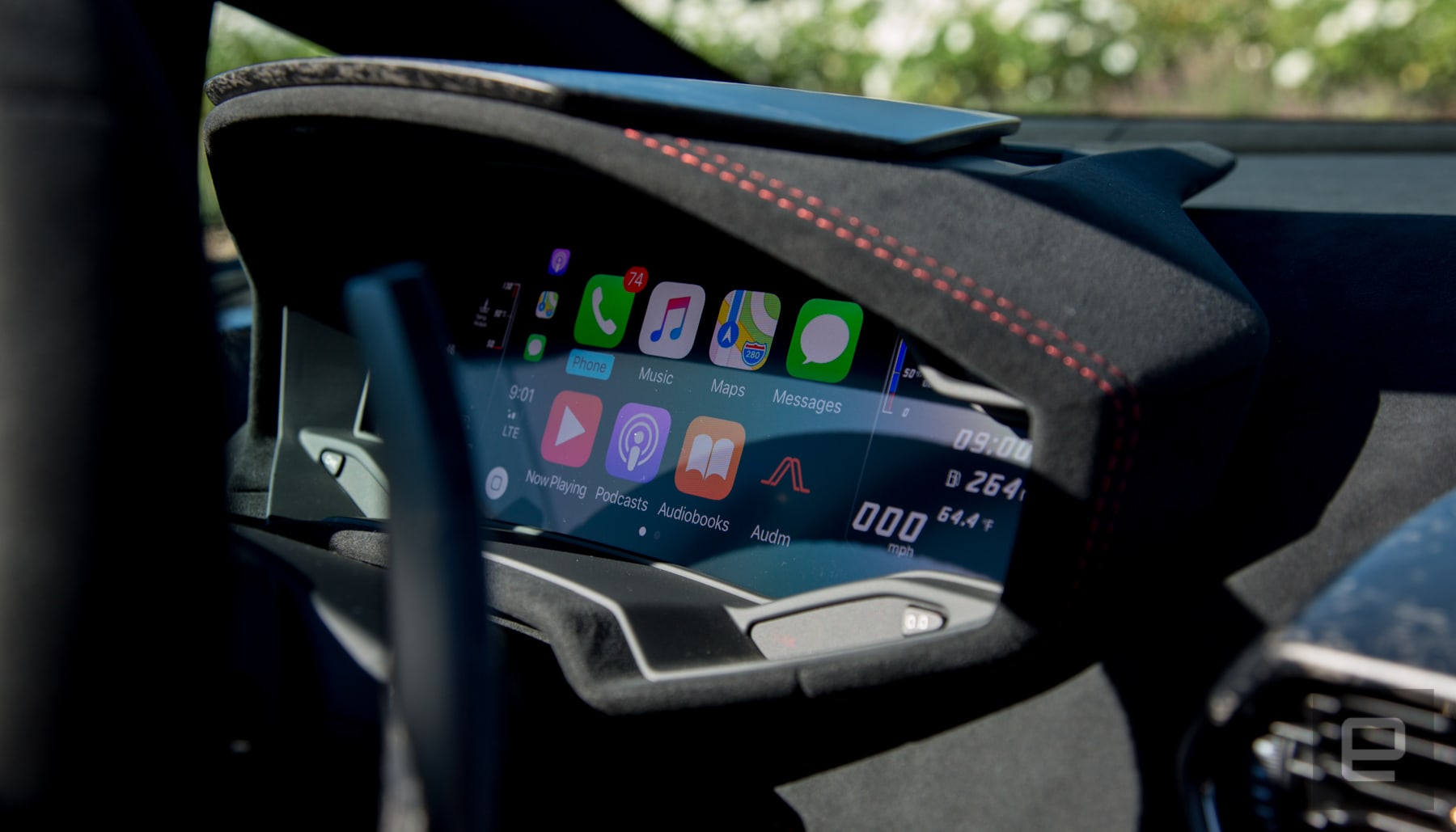 Both Corsa and Sport modes unleash the growl and burps of the Lamborghini as it drives down the road. It's probably annoying for anyone else on the road, but for the driver, it's great. It's a guttural sound that matches the driver's enthusiasm for going too fast and taking corners too quickly.

All that lizard brain fun costs though. At over $300,000 a pop, I'm never going to buy this car and chances are neither will you. In fact, the folks who are going to buy the Huracán Performante Spyder have probably already made up their minds. But for the rest of us, there's technology in this car that's intriguing. A forged carbon fiber that can be made into any shape is exciting for future, more pedestrian car design.

The ALA system's clever use of air to keep the car on the road (in a way that probably has other automakers kicking themselves for not thinking of it before) shows that thinking differently about aerodynamics can yield impressive results without incurring huge costs and weight. Lamborghini won't have a hybrid or electric car anytime soon. But the technology introduced in the Huracán Performante Spyder could help EVs in the future shave off weight and lower their drag. Will those cars be as fun as this one? It's doubtful, but really there are very few things that are as fun as a supercar. Especially one that's not yours.