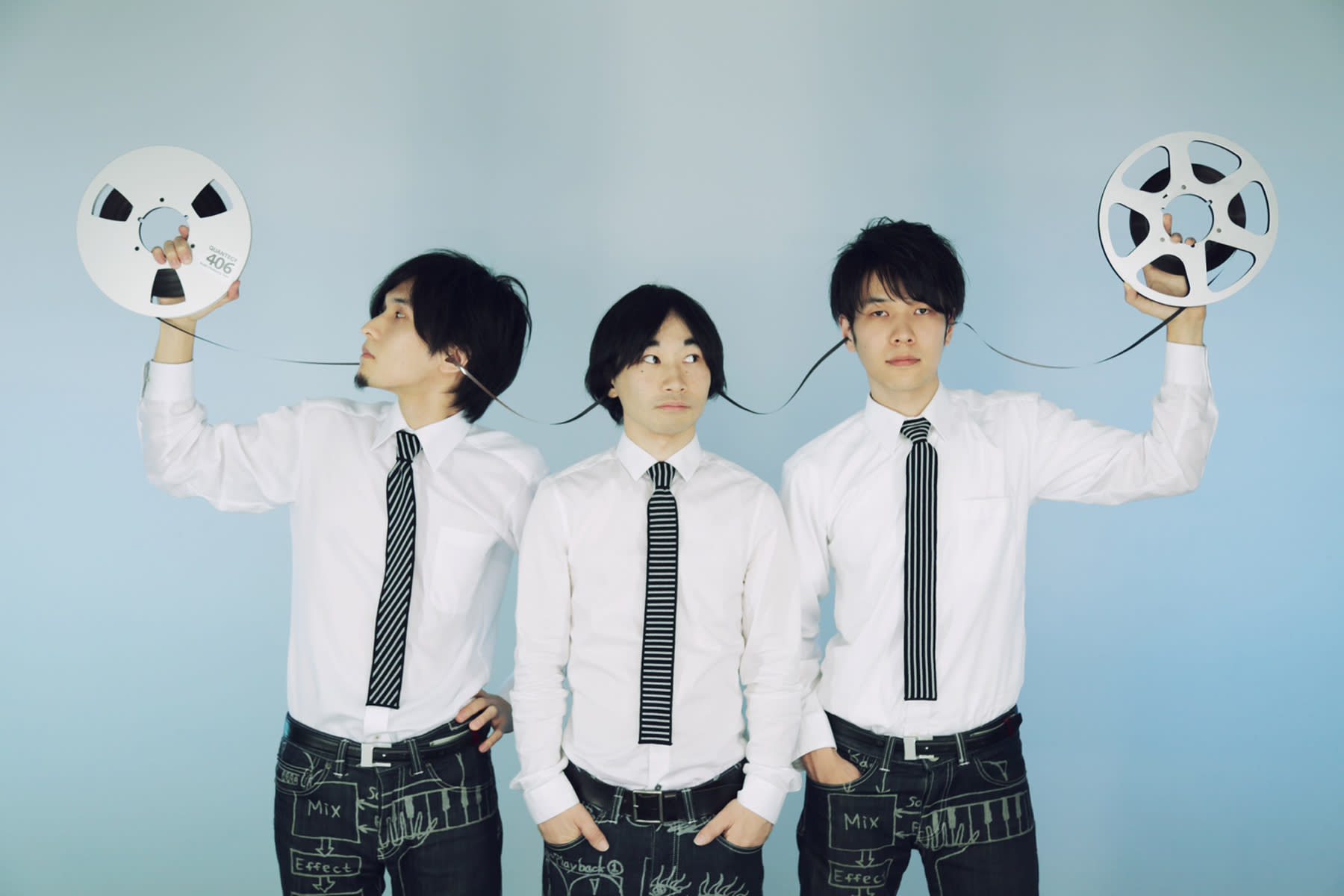 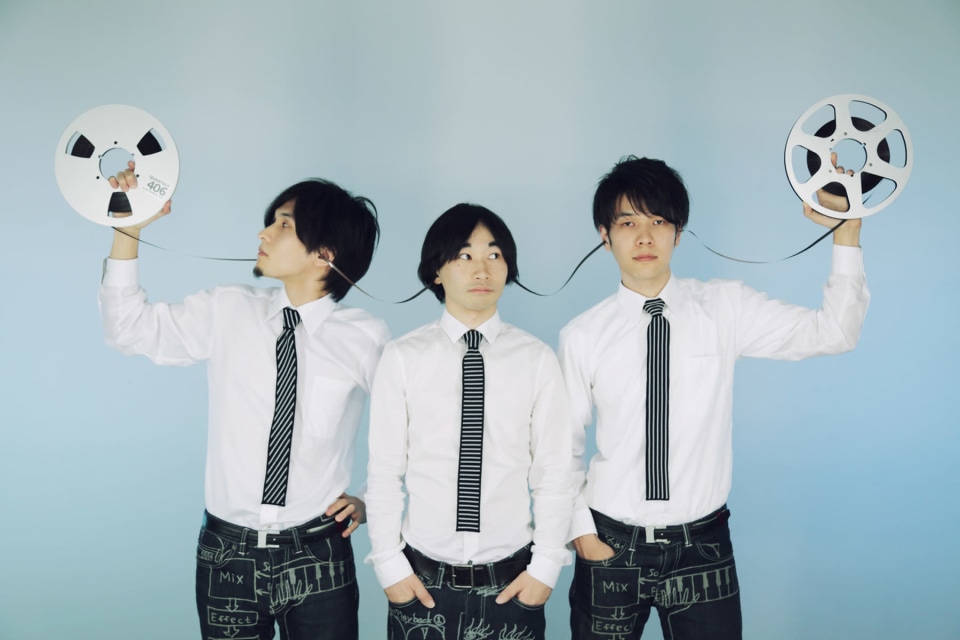 Open Reel Ensemble doesn't play conventional instruments, like guitars, drums and keyboards. Instead, the Japanese band uses reel-to-reel tape recorders built by Pioneer and TEAC in the 1970s and '80s. They weren't designed, of course, with musical creation and manipulation in mind. Ei Wada, the leader of Open Reel Ensemble, discovered their performative qualities by accident. More than 15 years ago, he was given a couple of tape recorders by a friend of his father who worked at a radio station. He tripped over them one day and, in a mixture of panic and sadness, tried to rotate the broken reels with his hands. To his surprise, the sound changed.

"I felt exoticism," Wada said through a translator. "And [realized] this was a kind of musical instrument." The technically-minded musician started modifying reel-to-reel recorders and, later, founded Open Reel Ensemble at university with a small group of friends. Today, the band is a trio. They learned to perform by recording a mixture of sounds and then, in real-time, stopping and turning the reels by hand. It creates a DJ-like scratching effect that's hard to replicate with digital tools alone. "Depending on what you record and how you touch and rotate the reels," Wada explained, "the playback sound will vary in many ways with different expressions."

Over the years, the group has developed new techniques. As Motherboard explains, each member can now "program" sounds directly on to the recorders, creating a strange blend of digital and analog technology. With multi-track recorders, Open Reel Ensemble is able to switch individual tracks on and off, too. Sometimes they'll record blocks of sustained noise, at various pitches, to be triggered and disabled like notes on a guitar. These allow the band to play intricate chords and melodies on stage. "We're finding new techniques every day," Wada said, "exploring rotation and movements, and the relationship between magnetics and sound."

Archipel produced a 'Toco Toco' documentary on Ei Wada in 2017.

Open Reel Ensemble has also experimented with bamboo sticks. The tape is still fed through the recorder, but the ends are attached to either end of the wooden rod. The band then rocks the stick back and forth, pushing and pulling different portions of the tape through the recorder. From a distance, it looks like a giant string instrument that's somehow been caught inside a server farm. Open Reel Ensemble typically plays this with a voice recording, or in conjunction with a vocoder. "You can get various sound expressions depending on the movement speed," Wada said.

Earlier this year, the band started playing the tape like a drum kit. The trio pulled the tape out and hung it across the room like a washing line, or some form of gothic bunting. Then, one of the members grabbed a wooden stick and hit the tape directly, producing a ghostly, pulsating sound. Rapid taps transformed the tape into a percussive instrument that can be played on its own or in conjunction with other reel-to-reel recorders. On June 15th, the band posted a video of a drum set played on two reels of overlapping tape. It currently has over 2,000 retweets and 3,500 likes.

On July 1st, Open Reel Ensemble played a live show with singer Tavito Nanao at the WWW music venue in Shibuya. During the performance, the band played a new 'Tape-Cordionica' instrument based on a portable reel-to-reel recorder by Sony. It was modified, though, to play like an accordion, with a small keyboard on one side and exposed tape reels for direct hand manipulation. These creations, and the quirky manner they're played in, are what make Open Reel Ensemble so intriguing for fans. The band's music is unique, but it's the spectacle -- the DIY creations and physical performances -- that makes each concert mesmerizing to watch.

Wada has another music project, called Electronicos Fantasticos!, that leverages a wider range of old consumer electronics. These include modified TVs, telephones, office fans and washing machines. Wada organizes them like an orchestra and often recruits collaborators, including Open Reel Ensemble, to play alongside him during live performances.

A teaser for Electronicos Fantasticos!

Now, the tape-playing band is preparing to release "an audiovisual work," according to Wada. It will include concert footage, music videos and "performances that cannot be realized on stage," the band's founder said cryptically. In addition, the band is pondering a new EP or album. Both releases are long overdue. The band has produced three albums to date; the most recent, Vocal Code, came out in 2015. If you live outside of Japan, it's almost impossible to buy a copy without importing. Curious listeners, then, are stuck with sporadic YouTube and Twitter clips for the moment.

Magnetic tape is an old technology, but even now, in 2018, Wada and the rest of Open Reel Ensemble believe there is more to discover and experiment with. The band is dreaming of a reel-to-reel cello, for instance, an organ, and an instrument that ejects tapes after playing them. "We continue to pursue musical expressions resonating in parallel worlds born by reel-to-reels," Wada explained. "We'd like to call it 'magneticpunk.'"

In this article: art, av, Band, entertainment, Japan, Music, OpenReelEnsemble, ReelToReel, Tape
All products recommended by Engadget are selected by our editorial team, independent of our parent company. Some of our stories include affiliate links. If you buy something through one of these links, we may earn an affiliate commission.