The DeX mode makes more sense in a tablet than it did on smartphones.

Good Android tablets are increasingly hard to find, maybe because so few people actually buy them anymore. But for those who are looking for one, Samsung's Galaxy Tab line remains one of the best in the category. It's nice to see, then, that the company has continued to update the device, launching today the Galaxy Tab S4. The new tablet focuses on improving productivity and entertainment, with multitasking DeX software built in and a refined stylus. It's slightly prettier than before, but unfortunately, it's also $50 more expensive than its already pricey predecessor.

Productivity is key, because people are working everywhere these days. Gone are the employees chained to their office desks (or fewer, anyway) -- folks are out typing away at coffee shops and coworking spaces. For this growing segment, "we had to develop something that was about taking people and their work and entertainment to the next level," said Alanna Cotton, senior vice president and general manager of product marketing.

A big part of the Tab S4's productivity-centric enhancements is the new DeX integration. As you may recall, DeX is a dock that turns the Galaxy S8 and S9 into desktop machines. But for the tablet, this isn't a new accessory. It's a software feature that takes into account not just keyboard attachments but other peripherals like Bluetooth mice or external displays as well.

When you plug in a keyboard, for instance, the Tab S4's home screen will switch to a desktop background. You can also launch DeX mode from the Quick Panel. In this mode, you can run up to 20 resizable windows at the same time. The performance here will depend on the device's Snapdragon 835 processor, of course, and during my brief hands-on there were no hiccups as I feverishly opened things like Chrome, File Viewer, Photos, Excel and more. Any Android app can be launched through DeX, too, which makes this feature much more useful. You can use keyboard shortcuts and drag and drop files between windows as well. 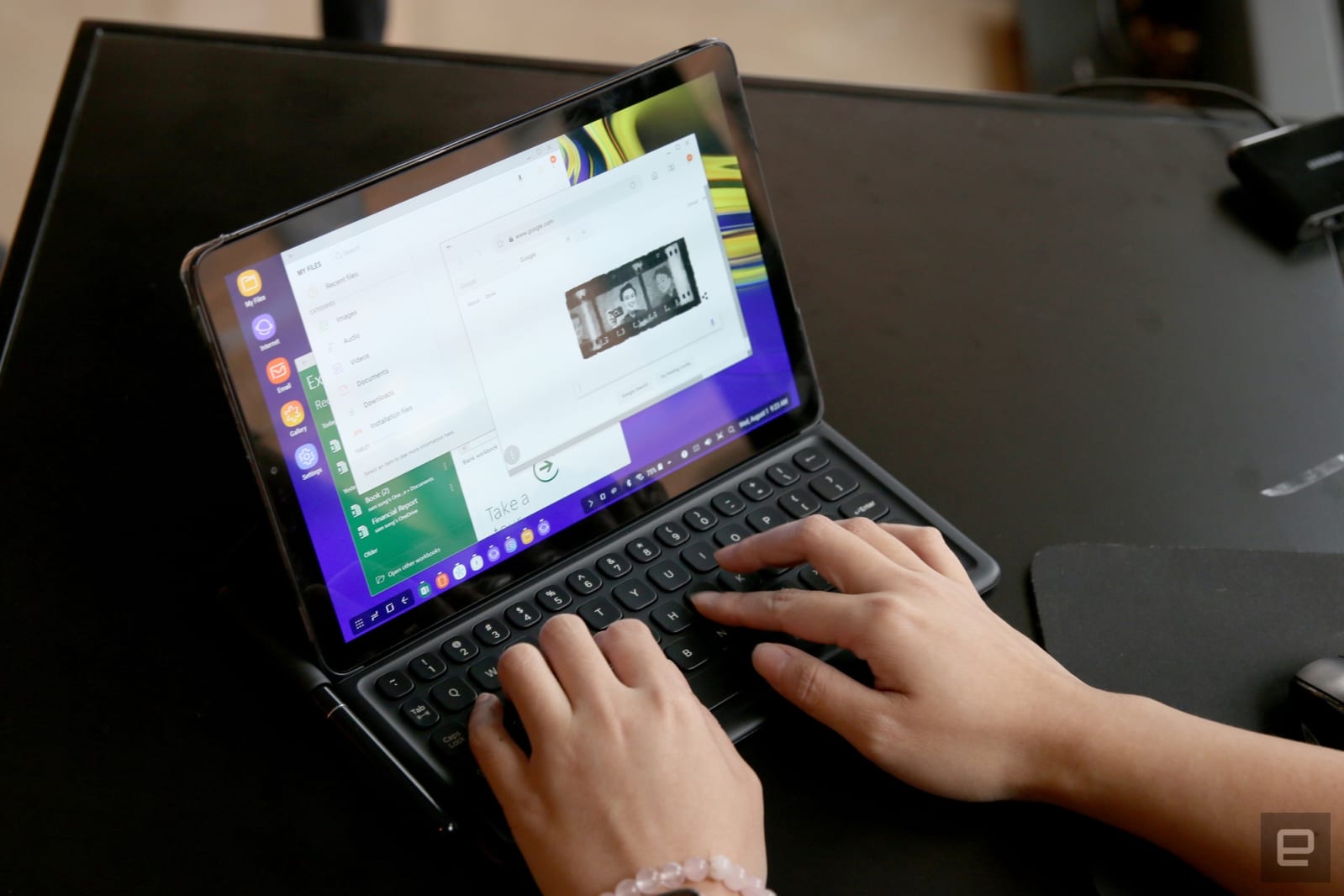 You can also extend your S4's contents to an external display via an HDMI to USB-C adapter and the tablet's screen will serve as a track pad or a second screen (in Android mode). This way, you can still keep an eye on things like your inbox or the livestream you're watching while working on a spreadsheet on the bigger display.

Samsung makes a keyboard cover for the Tab S4 that costs an extra $150. You might be better off connecting your own Bluetooth keyboard anyway though. I found Samsung's version somewhat cramped, with undersized keys that made it difficult to type quickly. The company also left out a trackpad, as it did on previous models, which continues to be somewhat disorienting. Individual keys had ample travel and were responsive, though.

Overall, I found the DeX enhancements made much more sense on a tablet than it did on a smartphone. If you buy the keyboard cover, the Tab S4 becomes a compact, all-in-one workhorse that doesn't require you to lug around any loose parts. It's a shame, then, that the accessory isn't included.

What is included is an S Pen, which lets you take notes or create sketches more easily. This time around, the S Pen has a rounded design that makes it more comfortable to hold. Samsung also brought back the Screen Off Memo and Translate tools that were missing from the Tab S3, while adding the Live Message feature that we first saw on the Note 8. It's fun, but not super helpful nor something I was missing from previous iterations. 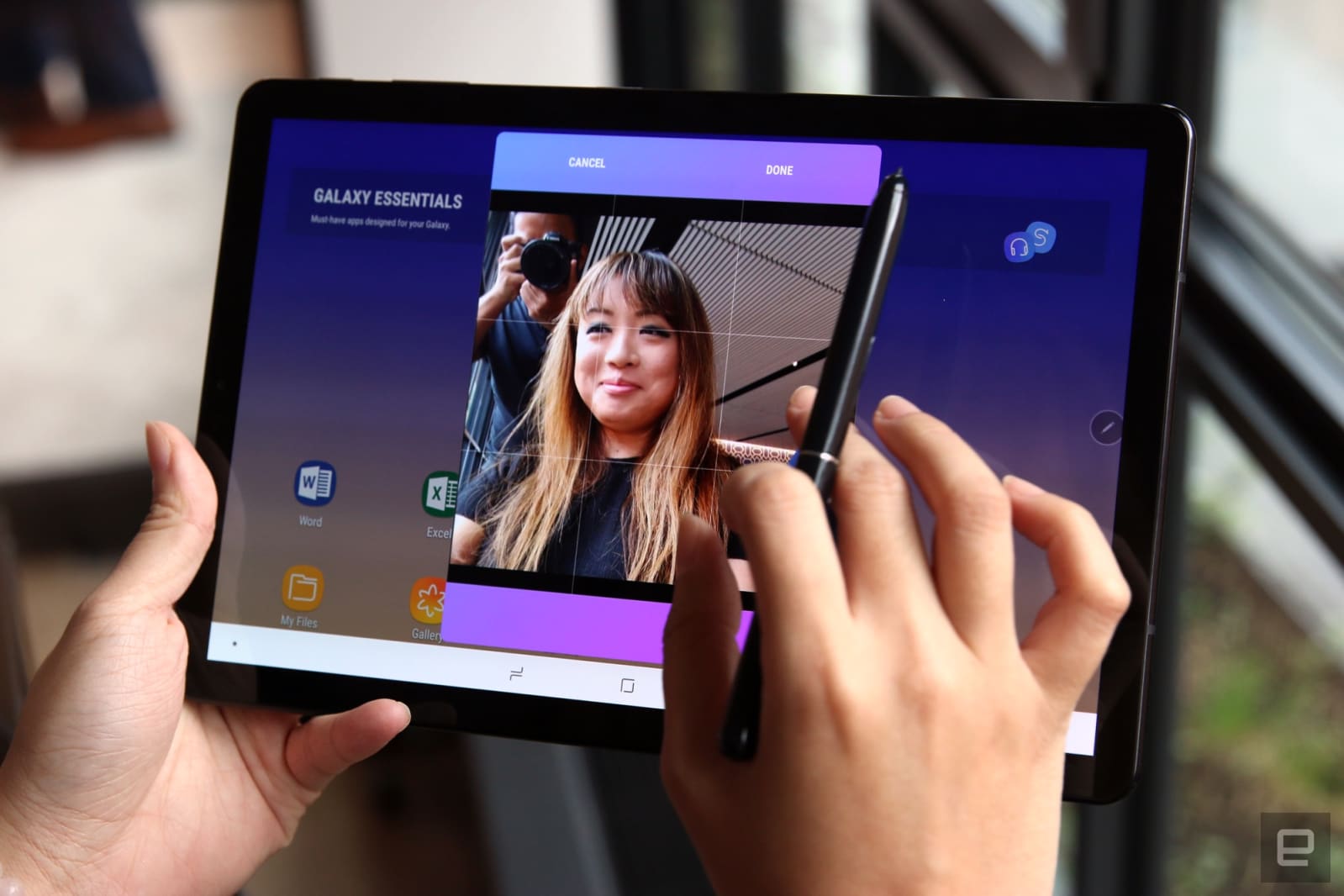 Aside from helping you get work done, Samsung also wants you to enjoy the Tab S4 when checking out YouTube videos or watching movies on the airplane. To that end, the S4 has a larger 10.5-inch display than its predecessor, with a slightly sharper resolution (2,560 x 1,600) to match. It was also more than sufficiently bright here at our demo, and I could easily read Engadget articles and watch Taylor Swift music videos under harsh light.

The Tab S4 also comes with four AKG-tuned speakers for powerful sound like last year's model, and delivered equally loud but mediocre audio. I clearly heard "Delicate" by Taylor Swift and "Girls Like You" by Maroon 5 and Cardi B with no problem, even over the loud lounge music playing at the event, but could barely make out any bass.

I'm impressed that despite increasing the screen size, Samsung managed to keep the tablet at about the same size. That might be because it slimmed down the horizontal bezels quite a bit, getting rid of the physical home button altogether. Overall, the Tab S4's front has been decluttered, making it much prettier than before. The rear looks the same, though, still housing the solo 13-megapixel camera with a glossy glass covering. 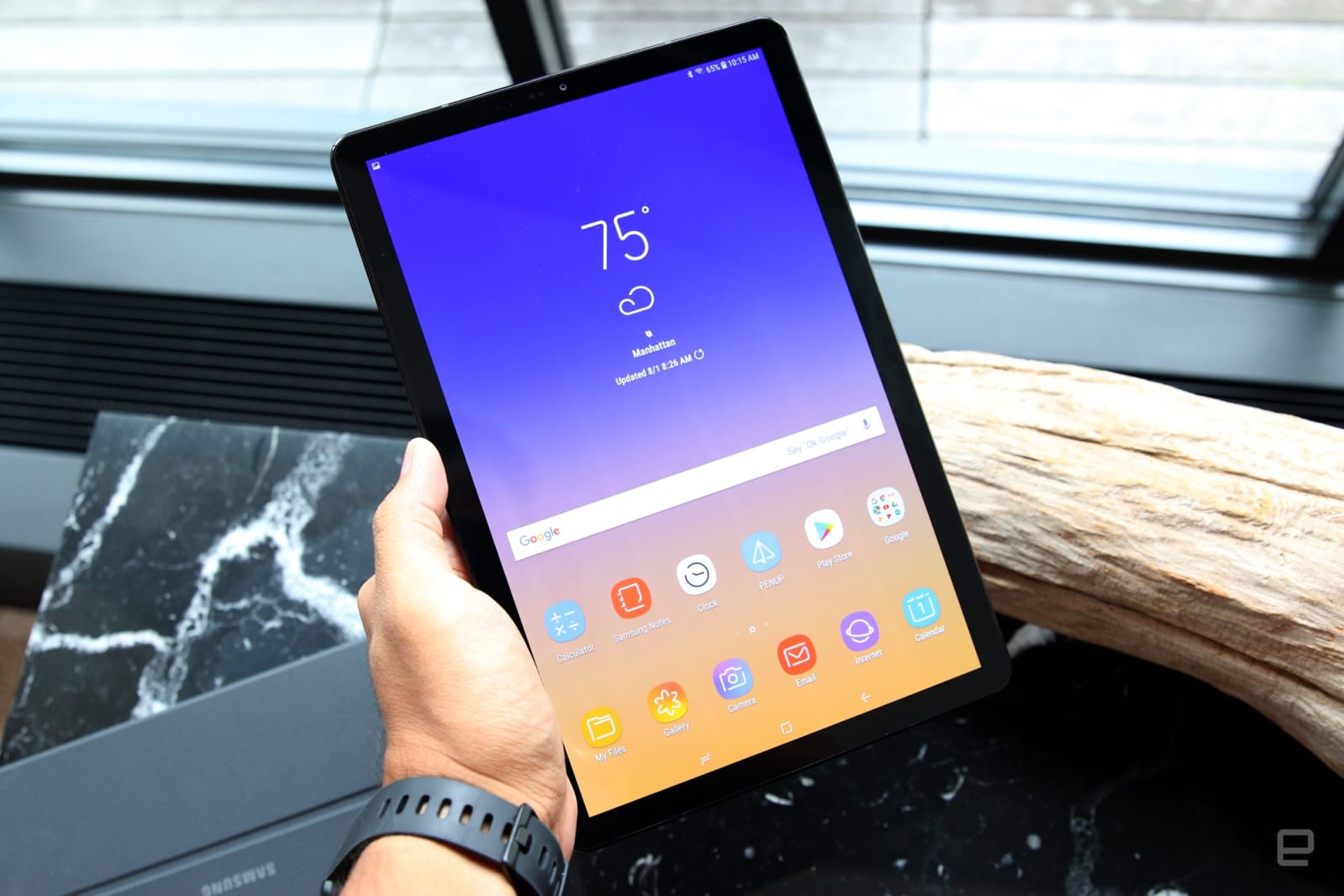 Samsung also managed to squeeze a larger 7,300mAh battery into the Tab S4 while keeping that dainty footprint. The Tab S3's 6,000mAh cell managed to last close to 12 hours on our test, and the Tab S4 is expected to last 16 hours of video playback, according to the company. That should be nice for those of us frequently stuck in transatlantic flights or don't like looking for power outlets on the go.

The Tab S4 will start retailing from Aug. 10th (although you can pre-order it now) for $650 at Best Buy, Amazon, Samsung's website and Verizon, and will be coming to T-Mobile, Sprint and US Cellular later. Those carrier options are important to note, since an LTE version with a physical SIM card slot (not eSIM) is also available. Although I still find the price a bit hard to swallow, Cotton told Engadget that the Tab line is a high-end line targeting "people out there who are looking for a device that does it all." For that crowd, the Tab S4 indeed looks like a promising Android tablet that can multitask like a desktop.