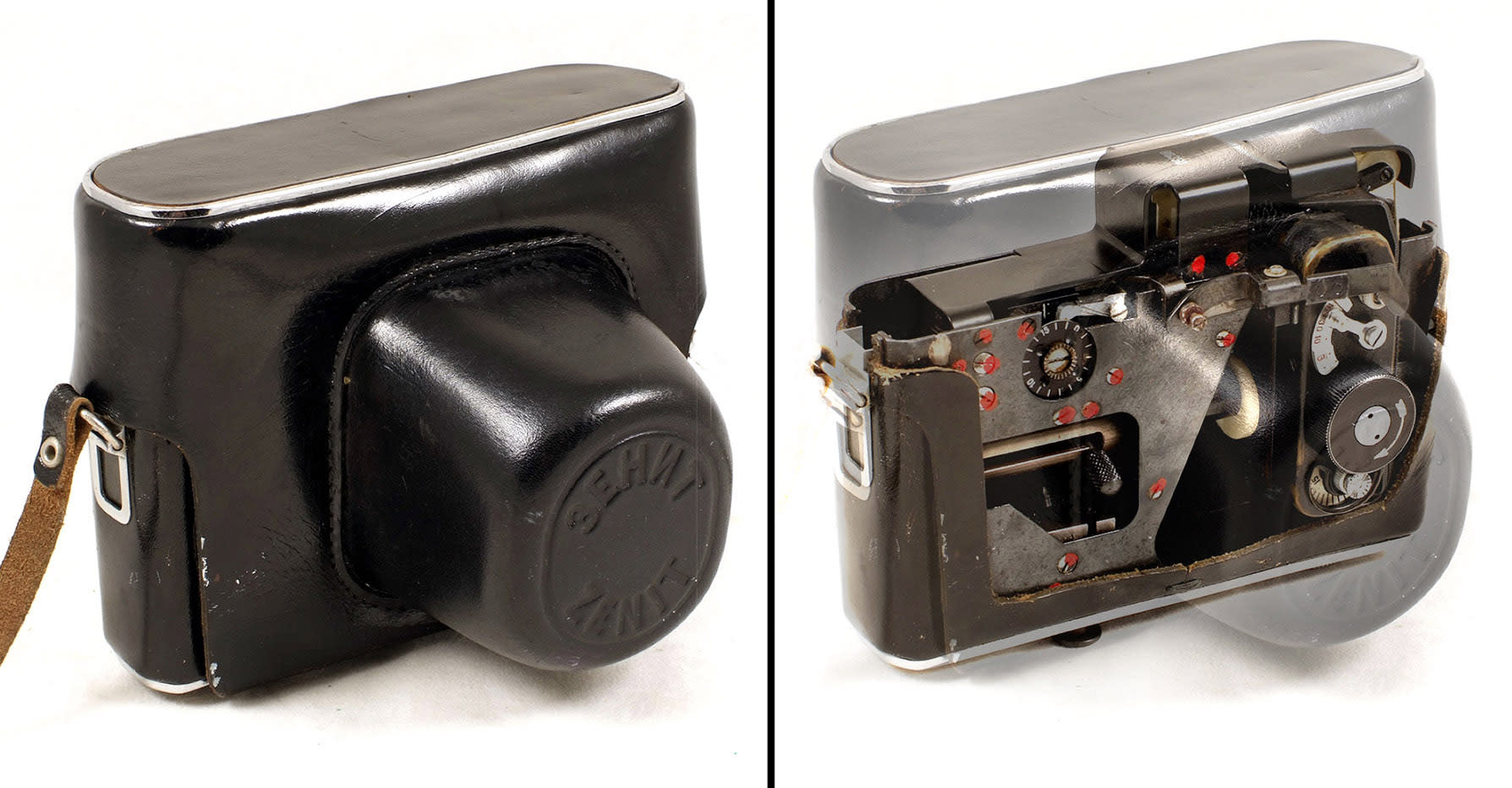 Auctioning a Russian spy camera disguised as... a camera

Spycraft in the Cold War was a lot different than it is now. Rather than hacking computers or trying to fix elections on social media, spooks dug up secrets using cool gadgets. Aston's Auctioneers in the UK just sold off a very interesting batch of 25 rare USSR-era cameras. The most interesting of those may be a miniature spy camera designed to look like a much less conspicuous Soviet-made KMZ Zenit-E SLR.

The camera case may say "Zenit," but the camera-within-the-camera is the infamous F-21 AJAX-12 spy camera with 21mm film and a tiny f/2.8 lens. It points out the side of the case, letting the photographer take pictures inconspicuously at 90 degrees just by pushing a small button on the bottom.

When the shutter is activated, a flap on the side of the case, driven by a piece of string, simultaneously opens to expose the lens. It also used a spring-powered "clockwork drive," allowing the user to take multiple images without detection.

On top of the crazy spy camera, Aston's auctioned off a briefcase camera, a cigarette package camera, a Leica camera with USSR stamping, an umbrella camera and a suit camera. Nearly all the devices in the auction, manufactured between 1942 and 1990, were museum-quality and in working order. Such objects are hard to come by nowadays, so the auction netted over £60,000 ($78,000). That included a record £29,000 ($37,500) for the cigarette camera and £4,100 ($5,300) for the camera-within-a-camera.

Aston's photographic consultant, Tim Goldsmith, called the spy camera "completely ridiculous," adding that it was his favorite lot of the bunch. "We must've had 40 or 50 huge boxes, but [it] was the only one that I could not for the life of me work out how to operate," he told Bloomberg.

Eventually, he had to call the original manufacturer KMZ (commonly known as Zenit) to figure it out. That's when he discovered that it was actually a different type of camera mounted in a special case edge-wise with the lens pointing to the side. "If you're somewhere where you're not allowed to take photographs, a security guard would say, 'Oh, he can't take a photo, his camera's closed in its case around his neck,'" Goldsmith noted. "[It's] certainly a gadget worthy of Q."

All products recommended by Engadget are selected by our editorial team, independent of our parent company. Some of our stories include affiliate links. If you buy something through one of these links, we may earn an affiliate commission. All prices are correct at the time of publishing.
View All Comments
Auctioning a Russian spy camera disguised as... a camera