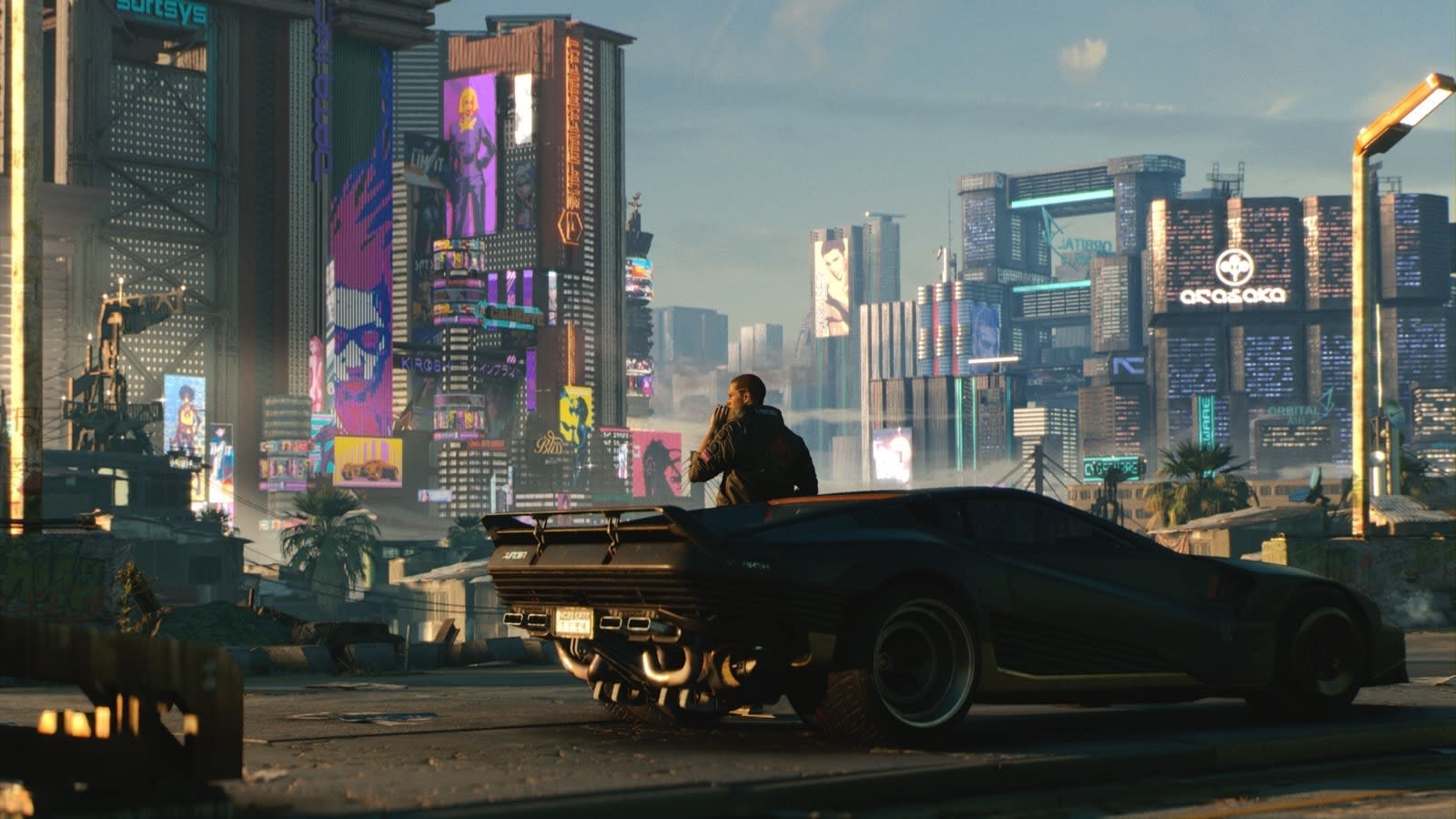 Night City hides its secrets in the shadows and the light.

The Gamescom demo for Cyberpunk 2077 is nearly identical to the one shown at E3 two months prior, but it features a few important changes. First, it introduces a new weapon, a katana capable of emitting a magnetic field that deflects bullets, and it highlights the game's character-selection screens. Players will be able to pick their gender, appearance and backstory right from the beginning, filling in details about traumatic events in their past and other personal tidbits.

And then there's the final scene of the new demo, which shows Night City at, well, night -- something CD Projekt Red has avoided until now. The E3 2018 trailer for Cyberpunk 2077 was fans' first look at Night City and developers chose to reveal it with a dramatic flourish: The video opens in a packed subway car traveling through a tunnel, dim with neon trimming. The music ramps up and bam, the train shoots into the open, sun-drenched air. A city of concrete, metal and flashing screens bustles under a bright blue sky.

"It's California, so," producer Richard Borzymowski explained with a shrug and a laugh, sitting in the CD Projekt Red Gamescom booth just after a demo of the game wrapped up.

After the E3 trailer dropped, some vocal fans took to message boards and Twitter to complain about the amount of daylight in the trailer. Even classic cyberpunk author William Gibson joined in the criticism, calling the game "GTA skinned-over with a generic 80s retro future." Others defended the bright vision of Night City, saying it was a relief to see cyberpunk in a new light.

"We knew how to create beautiful scenery in the night in Night City, like awesome Blade Runner terrain aspects," Borzymowski said. "But creating Cyberpunk as an open-world game with a day and night cycle, we knew we would have to build Night City in a fashion which will look cool in the daylight as well. This was a bigger challenge to us than night, and we just opted to go with that and make a trailer in daylight, which pushed us farther."

The Gamescom trailer ends with a new vision of Night City. Under an inky black sky, a dense, towering skyline is illuminated by a thousand neon signs in traditional Blade Runner fashion.

The point, for CD Projekt Red, is to demonstrate the ever-present danger of Night City (and show off the game's day-night cycle). It's a dystopian society in the fictional free state of Northern California, where mega-corporations have essentially replaced all government services and eliminated the middle class in the process. Poverty and crime are pervasive, regardless of whether the sun is shining. This is classic cyberpunk fare, offering a vision of the future that speaks to the dangers of unchecked capitalism and profiteering.

"The punk part in cyberpunk stands not only for rock and roll and sex and drugs and whatever," Borzymowski said. "It also stands as a fight against the system."

That's one way Cyberpunk 2077 stays true to the roots of its genre, but it's not the whole story. Though you play as a mercenary fighting against The Man, the end goal is not to destroy the world as you know it.

"We want to always keep it personal," Borzymowski said. "We don't want to tell a story about rescuing the world. We don't want to basically destroy the system. ... It's not just another part in this cyberpunk-industry cliche machine." CD Projekt Red isn't subverting cyberpunk as a genre, but it is trying to present some of its classic ideas in a fresh way. Cyberpunk 2077 features elements that are emblematic of the studio's hopes and predictions for the future. For instance, players are able to choose the gender and appearance of their characters, and the Gamescom demo offers the first look at the game with a male protagonist. Here, there's a subtle nod to inclusivity: When the main character, V, wakes up in his apartment after a successful heist and a night of partying, the person who leaves his bed is a man. This also happens to be the case when playing as a female protagonist, so it was an unexpected, yet welcome, touch.

Cyberpunk 2077 has been in development for at least six years and its team recently hit a major milestone: The entire game is playable from start to finish. It doesn't have all of the proper assets, playtesting or bug fixes in place, but seeing the story come together is a critical step in the development process, Borzymowski said.

"It gives you the answers to all of your doubts," he said. "It just feels great."