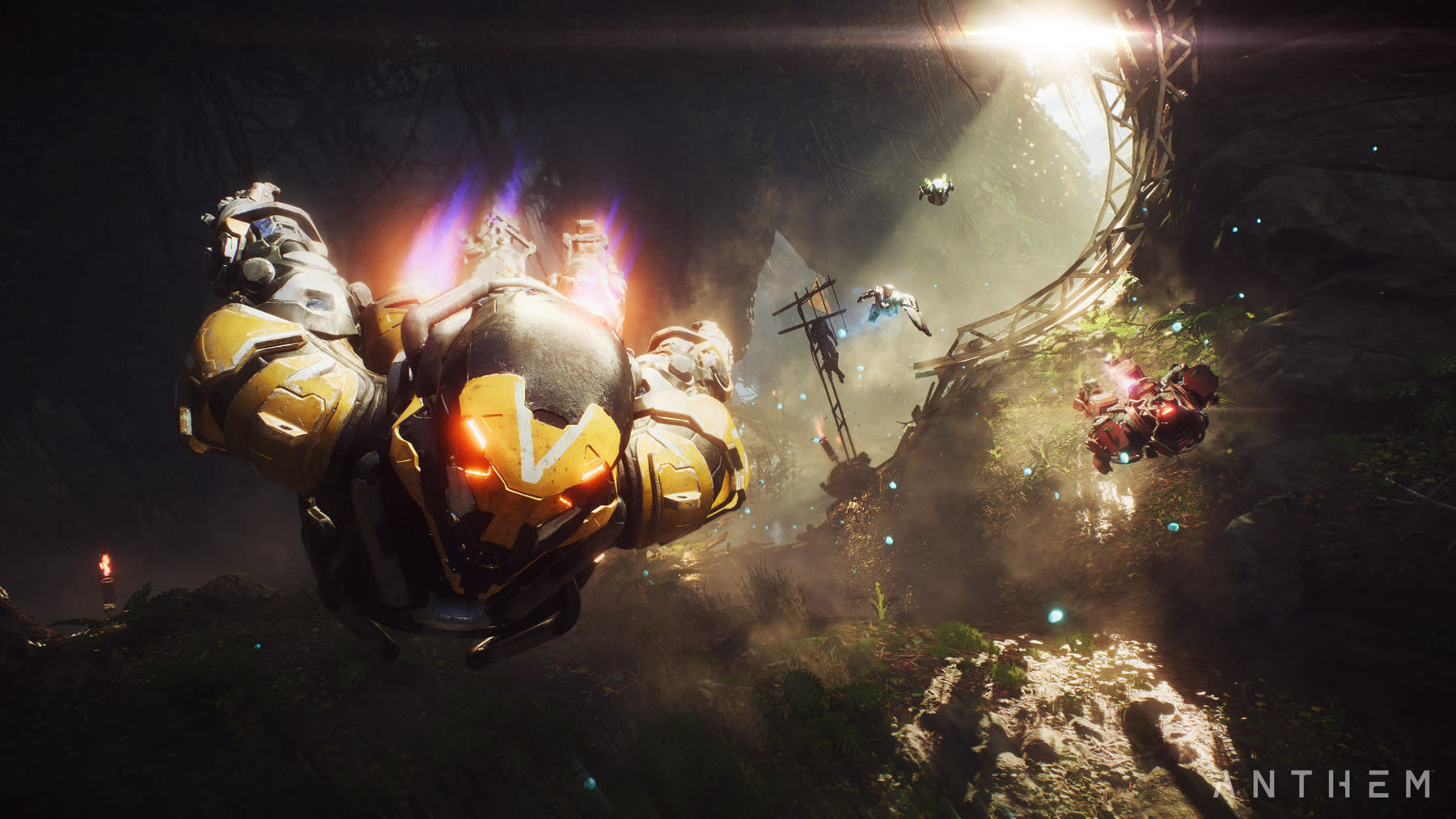 This isn’t your usual BioWare game.

BioWare's next blockbuster RPG, Anthem, comes out in less than six months. We know little about the project, though, despite its extensive showing at E3. The studio has explained the basics; it's a sci-fi epic that combines BioWare storytelling with the cooperative action and shared world structure of games like Destiny and The Division. We've seen a mission that takes place in the harsh, monster-riddled wilderness, and how all the different exo-suits -- known as javelins -- provide different tactical advantages. The team has also teased a town called Fort Tarsis that acts as a single-player story hub.

But how does it all fit together?

At Gamescom 2018, Anthem director Jon Warner revealed some additional details. Beyond Tarsis, for instance, you can freely jump into someone else's mission, and vice versa. It doesn't matter what level you're at, or how far you've progressed through the 'critical path' story. Anthem is a social game and BioWare wants to make it easy for people to team up and tackle objectives together. Some missions, of course, will include lore and story snippets. To avoid unwanted spoilers, the game will offer some kind of guidance, or warning, for players who are jumping around narratively.

BioWare is still "tweaking some of the details" on this, according to Warner. The studio has two guiding principles, though: Firstly, to ensure that players always know what they're getting into. "So that you don't get surprised by, 'Oh I jumped into your game and look, it's the end of the game. Oh my god, I didn't want to know this.'" The second is to give people the flexibility to play how they like. If they don't care for the story, and simply want to play with their friends, players can jump into other people's sessions and, theoretically, experience almost every mission out of order.

"So, not over-engineering a solution," Warner said. "I don't want to get into the business of trying to second guess what our players want and need." 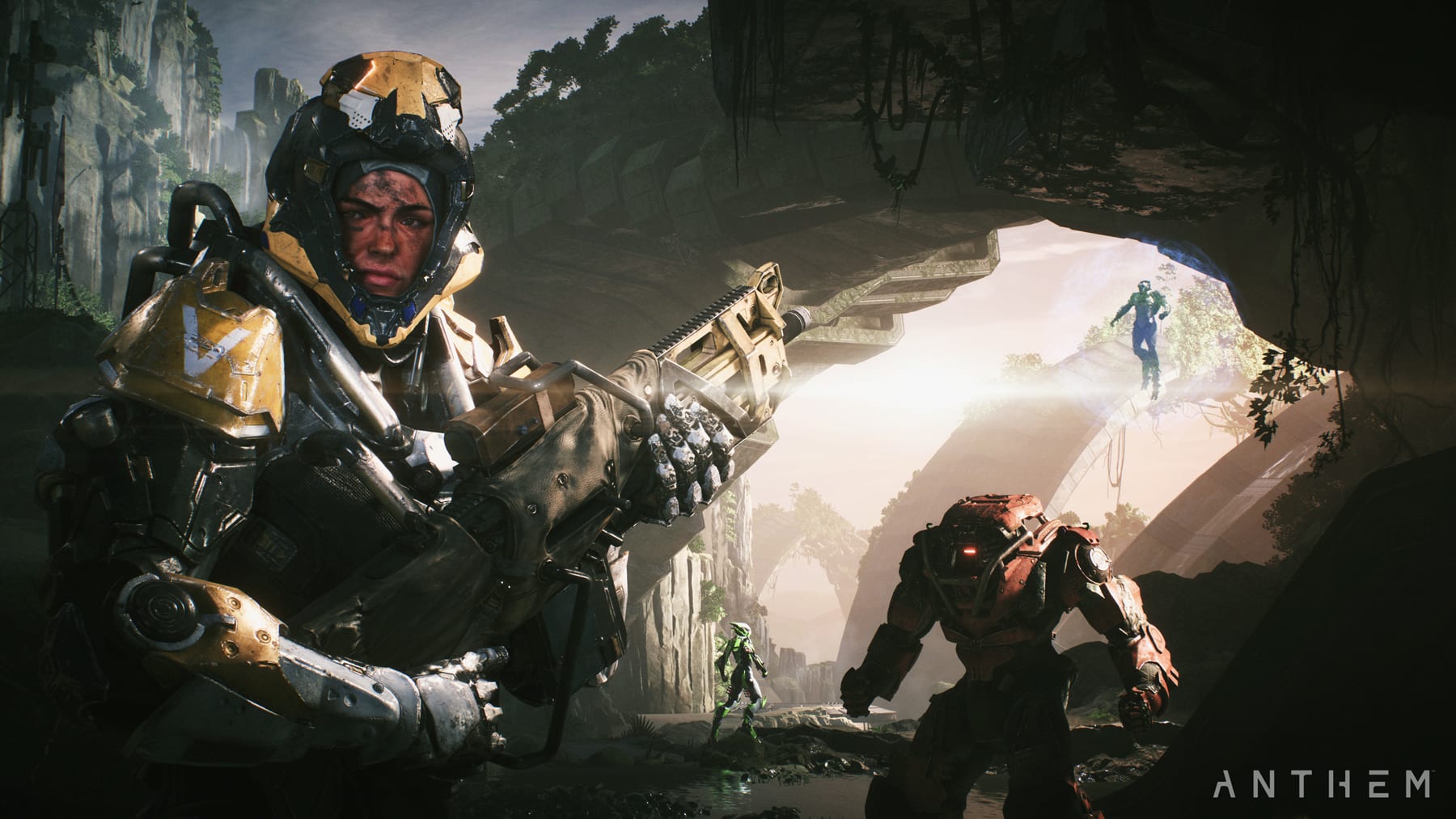 Outside of Tarsis, the world will be almost identical for everyone. BioWare will sync the planet's weather and day-night cycle so that all players -- regardless of their real-world location and position in the story -- will experience the same environmental flourishes. If you see a strange storm, for instance, you can open Discord, or walk into work the next day, and talk to other people about it -- everyone will have experienced the same thing.

It's unlikely, though, that the world will change dramatically as a result of your actions in the story. That's because it would create strange inconsistencies for people who are jumping back and forth through the plot. Imagine, for instance, that you popped into a game, ventured through an underground stronghold and escaped a lethal cave-in at the end. It would be jarring to then return to your version of the world which still has the cave intact.

The game will have set pieces, but they probably won't leave huge, lasting scars on the world. "We just kind of acknowledge that yup, this is a stronghold," Warner said. "You can play it as many times as you want. And you're gonna find it fun and engaging to go through it and challenge yourself."

The planet will be structurally similar to Destiny, World of Warcraft and Monster Hunter: World. It can be gorgeous and dynamic, with intelligent wildlife and a variety of enemies. Just don't expect to blow up half the map, or cause a giant earthquake that is visible until the end credits.

Fort Tarsis, though, will change. That's because no one else can venture inside your version of the city. You'll be able to talk to NPCs, discover more of the game's lore, and see the consequences of the story and choices you're making. It might seem restrictive, but keeping the narrative heavy-lifting here -- in a self-contained, private microcosm -- limits the opportunity for unwanted spoilers that might occur while playing missions in the wild with other people.

Your hunting group will always be you and, if you choose, other player-controlled javelins.

If you don't care for the story, you can simply enter the town, re-equip your javelin and head straight back out again. It will also be possible to maintain group chat while you friends are stocking up or experiencing story beats in their respective versions of Fort Tarsis. "There are certain game conventions that you just [have to] embrace," Warner said.

The dual structure of Fort Tarsis and the lethal wilderness, which BioWare calls 'Our World, My Story,' affects the role of NPCs (non-player characters). In previous BioWare games, like Mass Effect: Andromeda and Dragon Age: Inquisition, you would meet and converse with characters who later became your party members. In Anthem, though, your hunting group will always be you and, if you choose, other player-controlled javelins. That will limit the presence that BioWare-written characters have in the field. Remote 'Cyphers' will chat to you throughout each mission, highlighting key objectives, enemy forces and ancient relics, but that's about it. 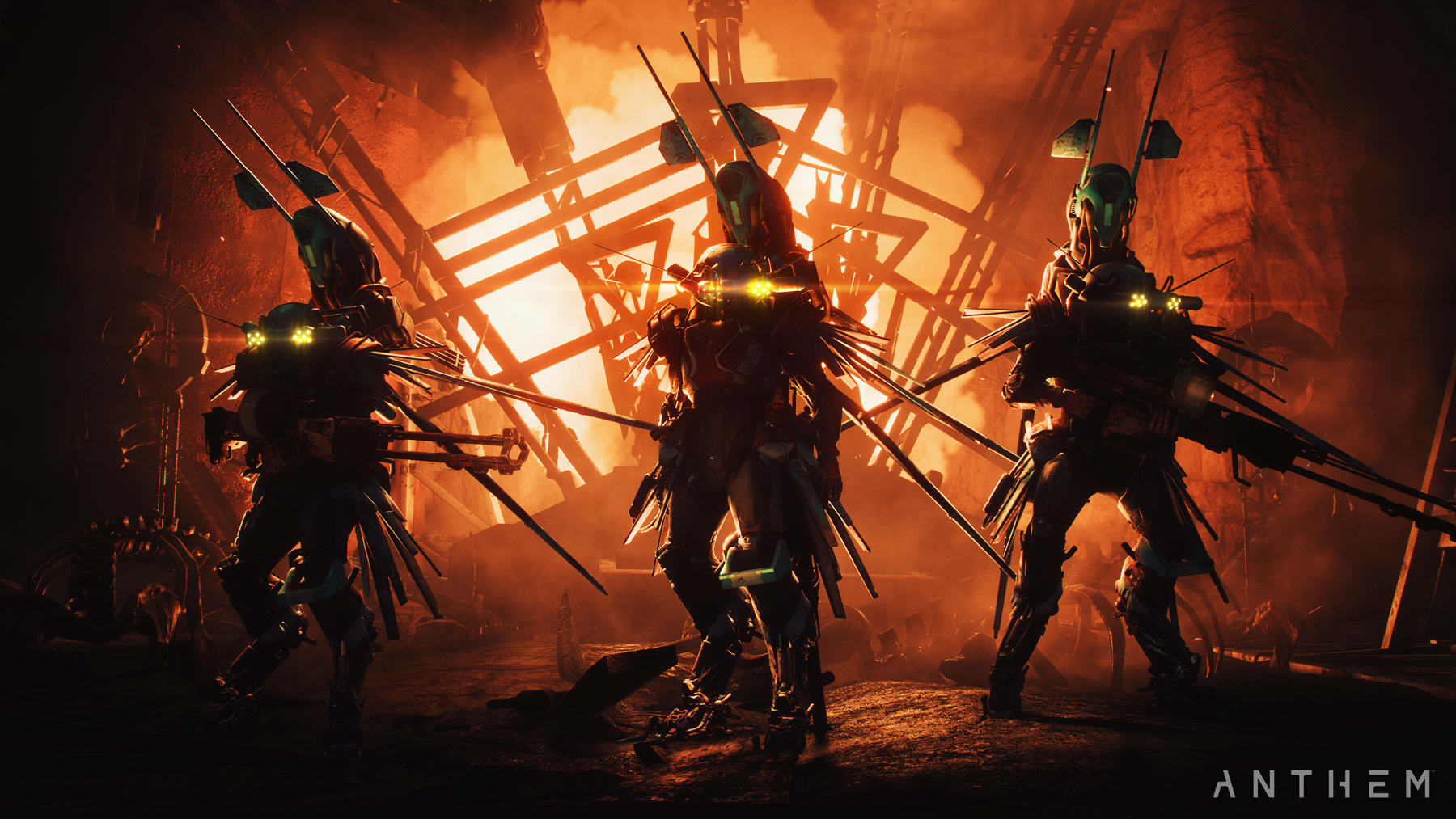 The hope, of course, is that organic player moments will fill the void. The first time you perform a combo takedown, for instance, or push through a stronghold with minimal health, should be just as memorable as BioWare's traditional storytelling.

The critical path story will have a beginning, middle and end. The larger word conflict, though, will be left unresolved. It has to be, so players can continue adventuring and shooting monsters in the wild. Warner sees the world of Anthem as a "stage" to tell fascinating stories well after release. Like Destiny and The Division, it will be continuously updated with new missions, challenges and gear to keep fans interested. "It's a really exciting prospect," he said.

Blending single-player storytelling with co-operative, shared-world action is tough. Warner said BioWare has learned from the mistakes of similar games. "We're always mindful of our craft," Warner said." Just looking at how you engage with your community, whether it's the type of content that you're releasing, how you manage your community, and the community tools that you release. These are all things that we think about. And I think that there have been some valuable lessons learned for all game developers over the past several years."

We'll see if BioWare has pulled it off next February.