A race car with room for luggage.

Ahead of the final unveiling of the E-Tron SUV, the automaker used the car festivities at Laguna Seca raceway to unveil its electric supercar, the PB 18. With over 600 horsepower and a center-positioned driver's seat, it's ready for the track. But also, your luggage.

"Audi is a race car brand. A brand of dynamism," president of Audi of America said ahead of the unveiling. The PB 18 personifies that spirit. The electric supercar positions the driver in the center of the vehicle. But the driver actually enters the vehicle on the left-hand side like you would any production vehicle. Once seated, the driver, dash cluster, steering wheel, and pedals automatically move towards the center of the car. It's slick.

It's able to do this thanks to a "drive by wire" system. Steering, acceleration and braking are controlled by computers instead of mechanical components. Meanwhile, the dash cluster is OLED, but also it's transparent which wouldn't be that cool if it weren't for the fact that you can see through it and through a wedge in the bonnet to see the road just ahead of the vehicle. Why do you need to see that portion of the road when you're traveling too fast to do anything about it? Just because it's cool. 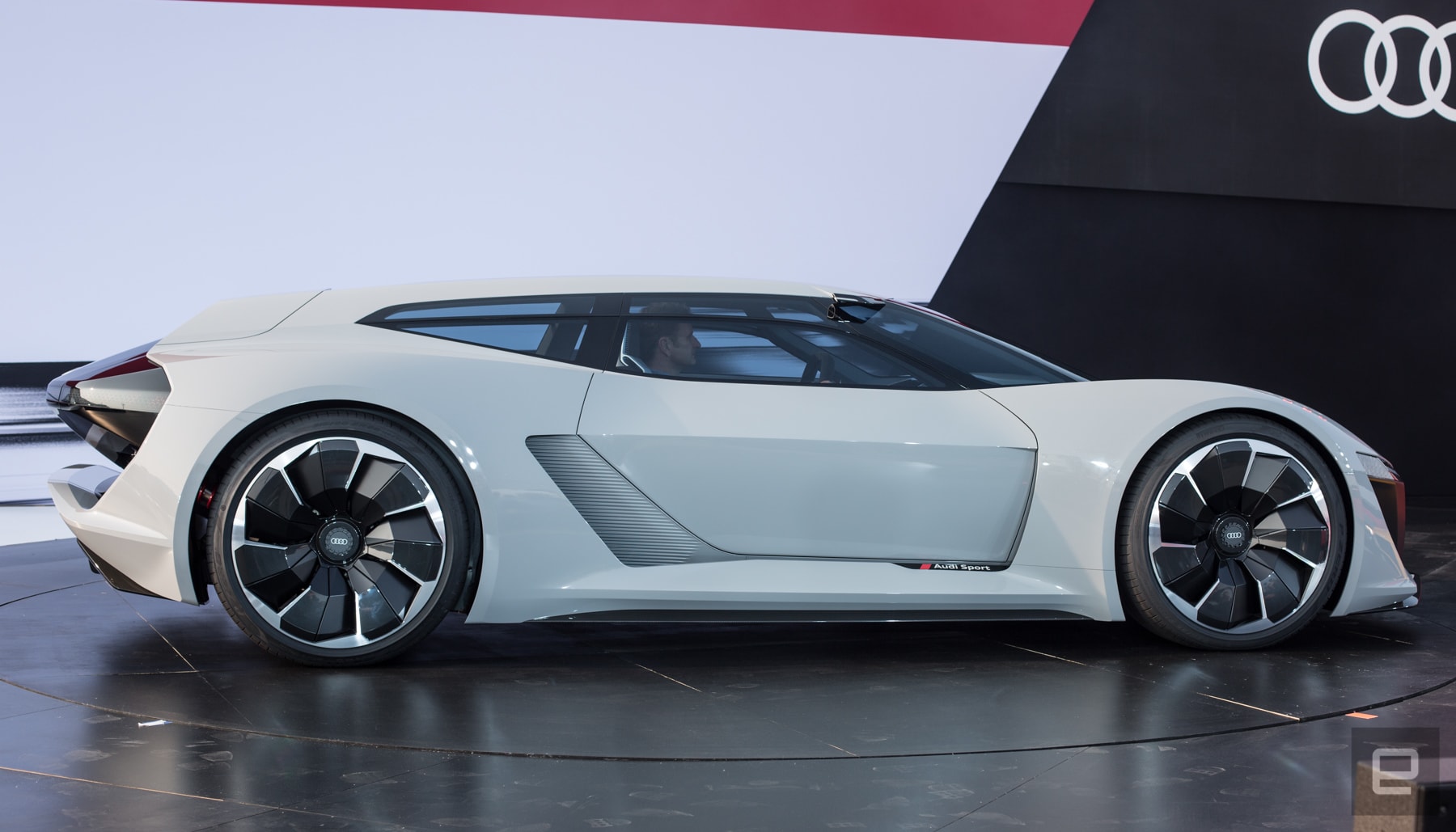 Audi said the car can be configured to have two seats. The driver's chair won't move but you will be able to take friends for a ride in the very fast EV.

And it is quick. The all-wheel-drive vehicle has three electric motors (two in the back, one in the front) that push out a combined 670 horsepower and 612 pounds of torque. Audi says it'll do zero to 60 in less than two seconds.

The 95 kWh battery has a range of 310 miles and is ready for fast charging that allows it to be fully charged in 15 minutes. It also supports Audi Wireless Charging (AWC) via a pad on the floor of a garage. the battery pack is placed behind and driver for ideal weight distribution and a low center of gravity.

While the car is a giant ball of performance, Audi says the car is at home off the track. It actually has a hatchback so you can put luggage in the trunk for a weekend trip that doesn't involve track times. That is unless you're vacationing at the track. 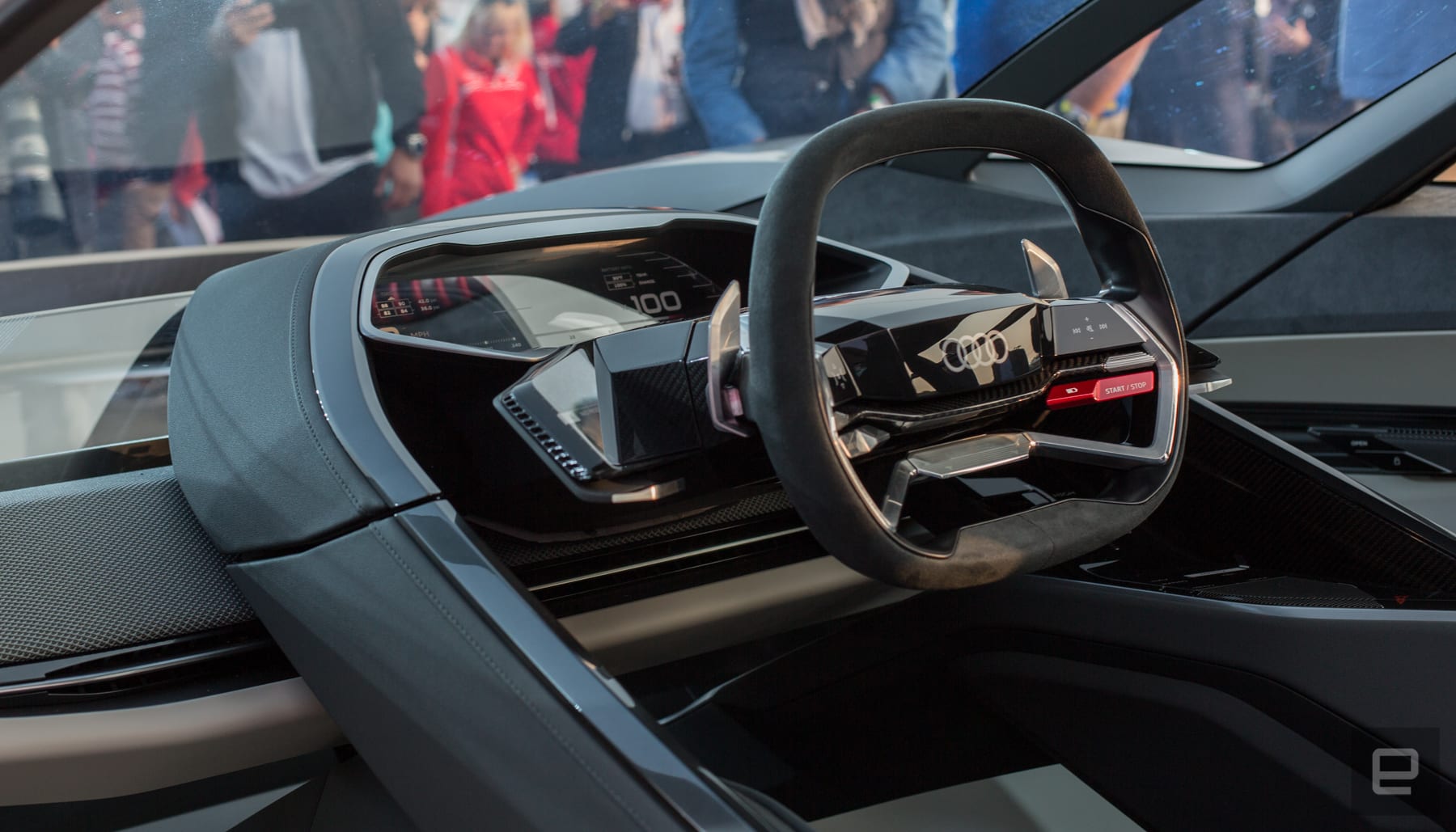 Sadly it's very unlikely this sports wagon/supercar will ever make it into showrooms. But, most of the technology found in this car will make its way to production vehicles in the next few years as Audi transitions to more electrified vehicles like the E-Tron SUV.

All products recommended by Engadget are selected by our editorial team, independent of our parent company. Some of our stories include affiliate links. If you buy something through one of these links, we may earn an affiliate commission. All prices are correct at the time of publishing.
Audi's PB 18 E-Tron is a supercar spaceship
audi
business
design
electriccar
etron
etronpb18
ev
gadgetry
gadgets
gear
green
pb18
supercar
tomorrow
transportation