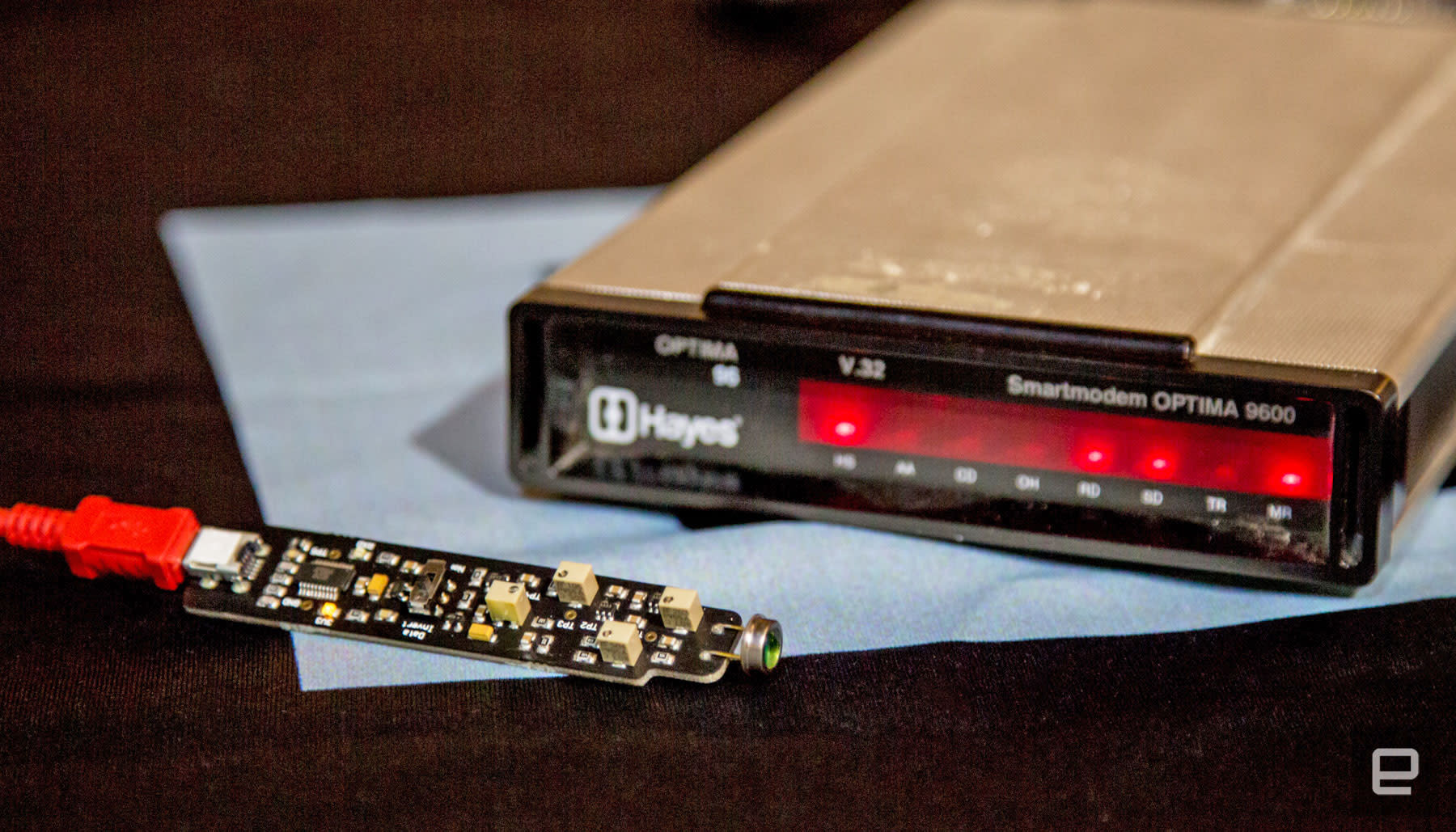 From free decoder rings hidden in our cereal and Enigma machines used during world war two to the end-to-end encryption of iMessage, the sending and receiving of secret messages has always been a part of our daily lives. Thanks to technology, apps and services that offer end-to-end encryption are now commonplace. But what if you want to share a piece of information with an individual or group in a public area?

Hacker Joe Grand has an idea about how to do that with LED lights. He built OpticSpy, a device that converts an optical signal (visible or infrared) into a message. The device is about the size of a large permanent marker (he originally hoped to fit it in a regular marker but it's a bit too wide). The OpticSpy "reads" light pulses, converts the data into words and sends the correspondence off to a connected computer via USB.

The interesting aspect is that the light can pulsate at a frequency that's imperceptible to humans. An entire wall of LEDs could be displaying an ad or art and a single LED could be used to transmit a covert missive.

The system has great potential for sharing messages with a select group of people or a single person without anyone else being the wiser. But it does have limitations. For a single LED, range is limited to a few inches. Lasers would have a longer range, but the beam needs to hit the receptor to work (and a laser beam shooting around an area isn't exactly covert).

Still, it's an interesting idea that Grand said he's happy to see others develop further. One potential idea is a scope on the receiving end of the device so it can pinpoint a light from a distance. Even if a sign is showing an advert, all the LEDs could be set to transmit a message. The lens would reduce the "noise" of the rest of the visible light in an area.

Another possible scenario is embedding the system into a phone case. Right now the OpticSpy requires a computer to display a message. A case connected to the phone with a scope that uses a terminal app would make the idea mobile.

However it plays out in the future, Grand wanted to make sure what he built right now is available to all. He open-sourced OpticSpy so others can build their own and improve on the work he did.

In a world where electronically sent messages have the potential of being intercepted either by a nation state or nefarious individuals or groups, the opportunity to share communications with an individual or group surreptitiously via lights is intriguing. Will it take off? That's hard to say, but don't be too surprised if you see a group of activists pointing their smartphones at an advertisement then moving in unison to a new location.

In this article: art, defcon2018, design, diy, do it yourself, doityourself, gadgetry, gadgets, light, messaging, personal computing, personalcomputing, secret, security, spies, tomorrow
All products recommended by Engadget are selected by our editorial team, independent of our parent company. Some of our stories include affiliate links. If you buy something through one of these links, we may earn an affiliate commission.