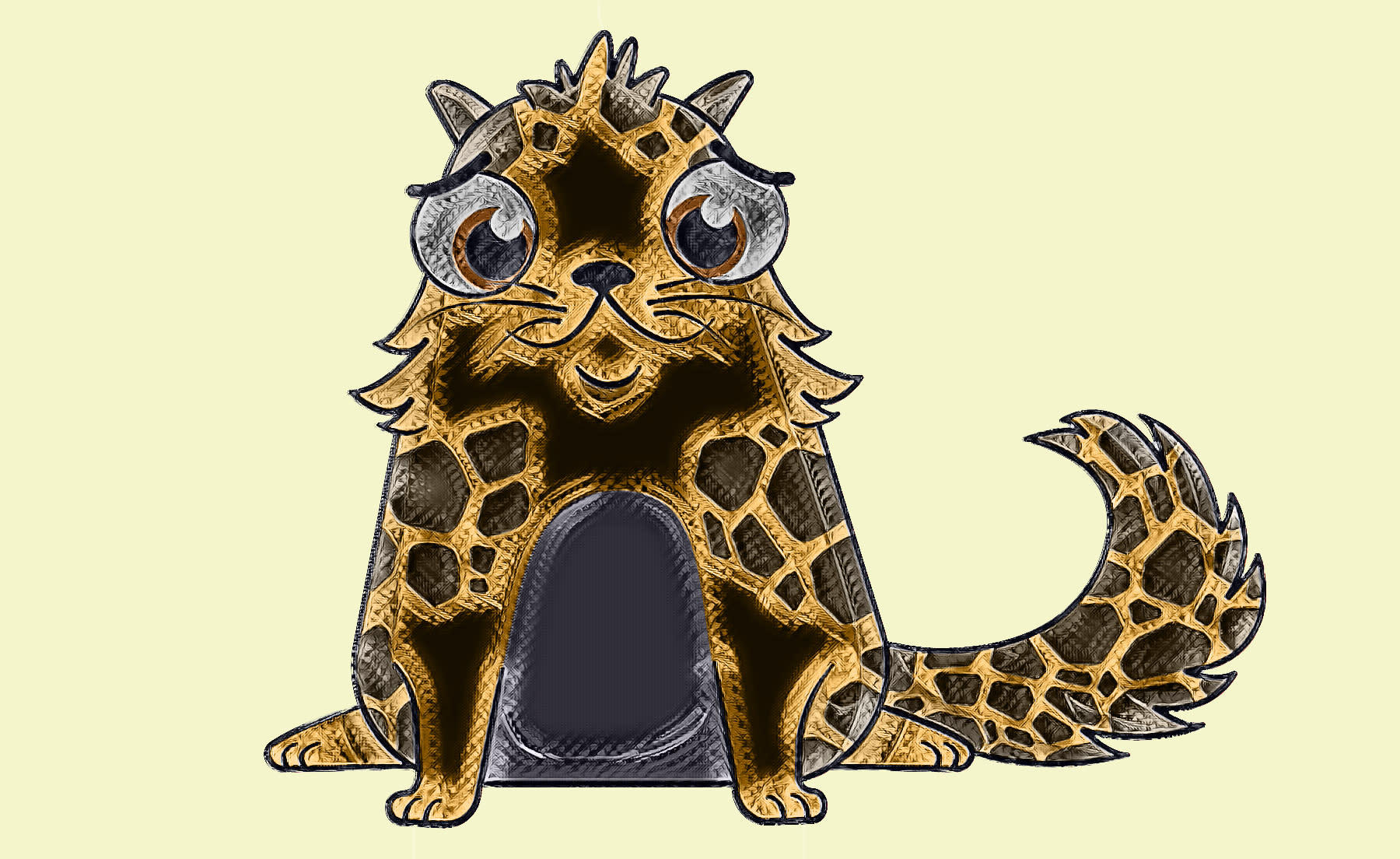 The weird, wild and expensive world of blockchain art

Is it still shocking in 2018 to see someone drop more than $50,000 on a digital playing card? Well, that's what happened when Gods Unchained, a blockchain-based digital card game, wrapped an auction on its rarest card to date: the Hyperion Mythic card. It sold for 146.279 ETH, which was worth about $54,000 at the time. If that doesn't shock you, how about the fact that a digital trading card of Elon Musk is currently on auction for about the same price?

You'd be forgiven for thinking that this crypto madness ended when the bitcoin price plummeted more than 70 percent this year, but it's not that simple. The Hyperion card and the Elon Musk "Crypto Celebrity" are both examples of a type of product we'll call digital assets. A digital asset is an object that exists only in lines of code in a decentralized ledger. Like a bitcoin, a digital asset is unique and can only be owned by one digital wallet at a time. If you have the private key to that wallet -- a long, cryptographically complex string of numbers and letters -- then you, and you alone, own that asset stored in that wallet.

A bitcoin is just a bitcoin, but digital assets are generated and run on "smart contracts" on platform-based blockchains, such as Ethereum, Neo or Zilliqa. Popular assets run the gamut from cards to memes to artwork, but far more complex things are possible with smart contracts, such as music and movie files hosted on blockchain and even full-on operating systems -- the latter being mostly theoretical right now or in early test stages.

Most popular digital assets can be traced back to CryptoKitties, which popularized the idea of collectibles on the blockchain. CryptoKitties is billed as a game, but it's barely so -- the main activity is hoarding and trading CryptoKitties. It's more accurate to think of it as Beanie Babies on blockchain. This horde/trade format has been replicated in a rush of similar games that currently flood the digital asset space: crypto gladiators, hash puppies, crypto punks, et cetera -- all of them following the CryptoKitties mold. By any objective measure, this format has become exhausted to the point of stupidity. A quick jaunt through OpenSea, one of the biggest marketplaces for digital assets, turns up the nadir of this absurdity: Crypto Celebrities. These are simply trading cards of famous people like Donald Trump, John Oliver, Ray Romano, Sandra Bernhard, et cetera. Many of the photos are ugly, poorly sourced, blurry or borderline insulting to the subject. There is zero artistic embellishment added onto this: A Crypto Celeb is just an ugly pic, and all you can do with it is horde and trade it. All there is to Crypto Celebrities is the pathetic honor of being the only person to own the Carrot Top card. (You can, it should be noted, breed celebrities into ugly mutants on CelebrityBreeder, but that's a different game.)

But it's not all horde and trade. There are far more robust games out there, including rudimentary RPGs like CryptoSaga and MMOs like Crypto Space Commanders (note to game developers: you can drop the "crypto" prefix at this point). Decentraland sells "virtual real estate" in a Second Life-like platform that has yet to launch. But the most promising assets, from both an investment and a cultural viewpoint, are without a doubt art objects. These range widely in quality too, of course. Digital Art Chain is a DeviantArt-alike that allows amateur creators to sell their digital works, which is, actually, a pretty exciting breakthrough for artists who see their works copied endlessly across Google Images and Pinterest with no value returned to them. CryptoArte is mostly ugly, bitmap-looking computer-generated artworks. HiPrecious is a clever and interesting series of animated trading cards. It bills itself as "high-end crypto collectibles, luxuriously made in Paris." Cards include Bruce Lee, Tesla, something called Zombie Cat, the World Trade Center and the Hawksbill Sea Turtle. They look nice and are fairly cheap, for now: The most expensive one is Ponzi, which sells for an unironic 8 ETH, or about $2,300.

Some of the headline-grabbing artworks on blockchain stem from the robust and incendiary meme space. Pepe the Frog, which was once the strict domain of racist trolls and Trump shitposters, has been picked apart and reassembled into a mélange of self-referential works that satirize and comment on internet culture in general. The Rare Pepe Wallet is a lively and curated marketplace where working artists produce memes for a relatively decent payday. (It must be noted that the Rare Pepe Wallet people have taken pains to disavow the use of the Pepe meme by the alt-right, pointing out that Pepe memes existed long before alt-right trolls corrupted them.)

An IRL Rare Pepe auction at the peak of the 2017 mania -- which Vice reported had attendees from Sotheby's and Christie's in the audience-- saw the one-of-a-kind Homerpepe card sell for more than $39,000, making it the most expensive Rare Pepe we know about. The owner, who prefers to be identified as zippi101, told me he sees it as a long-term investment. And he may be right. Consider the high prices that the Gods Unchained Hyperion or the Elon Musk Crypto Celebrity are commanding. The most expensive CryptoKitty has retained a lot of value compared to its cryptocurrency cousins: It's currently on sale for about $90,000, which is down only about $20,000 from its sale price in December 2017. This suggests that digital assets could be more-durable investment vehicles than most altcoins.

But there's no mistaking that as cryptocurrency prices have plummeted this year, the digital asset space has likewise cooled. Consider CryptoKitties as the bellwether: It sees about 430 daily users now, according to DappRadar.com, down from about 14,000 daily users during the December 2017 peak. The company behind the cats has been plagued with efficiency and credibility issues as well: It came under fire for hosting a CryptoKitty auction in collaboration with Warriors star Steph Curry but then yanked it under dodgy circumstances; and it's routinely been dragged for high "breeding fees" and network congestion. As the space consolidates without the pressure of crypto-buying mania, developers can focus on improving the user experience, which remains a roadblock for mainstream acceptance of all digital asset marketplaces. The blockchain technology underpinning asset ownership is still pretty complex for the masses. Even interacting with Gods Unchained, a highly polished Hearthstone-like card game with funding from big crypto players such as Coinbase, requires MetaMask or a similar browser wallet plug-in, and you need to purchase and store Ethereum tokens. It's made this process pretty seamless compared to managing other digital assets, but it is still a complex task compared to PayPal or Venmo.

Unique digital items have the potential to unshackle artists.

The user interface will surely improve though. Soon enough, interacting with the blockchains underneath this technology will be as seamless as interacting with the HTTP protocols that underpin the web -- i.e., you will never notice them. Unique digital items will become mainstream, and they have the potential to unshackle the artist from the more parasitic aspects of the entertainment industry.

Digital assets these days may be primarily cards or illustrative art works, but as the technology advances, it can branch beyond simple visuals into the realms of music and video. Exclusive albums, songs or extras created by the artists can be made in limited, controlled quantities. True crypto-utopians hope that this can help artists retain more of the value they create and reduce the power of massive digital-distribution platforms like YouTube and Spotify. In a nice double whammy of progressivism, this could also erode the power of massive tech services that profit from monetizing huge masses of user data. For now this is a pipe dream, but a decentralized music-streaming service could become the killer app both the music and the crypto industries are searching for.

I'm sure this is coming, but until then, digital assets are just a playground for nerds and forward-thinking curators who are meme-trading toward a future where artwork will be not only what's on your walls but also what's on your phone.