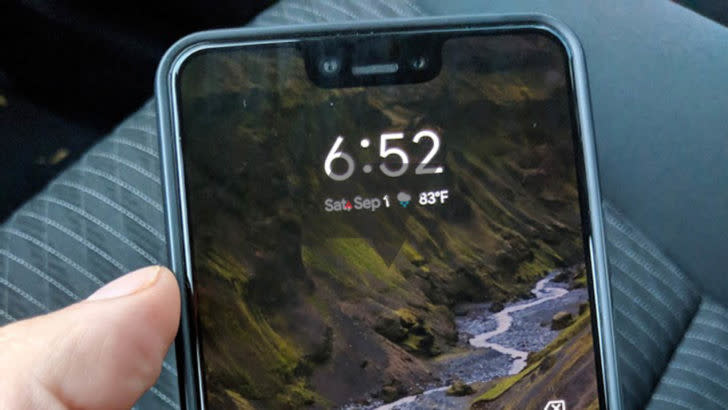 In a truly global smartphone market, unreleased devices leak all the time. It's become almost impossible for Apple, Samsung and other major handset manufacturers to keep designs, specifications and features of their latest flagship secret before their official launch. The same can be said for Google, which has seen its upcoming Pixel 3 launch beset by a number of leaks -- none more puzzling than having the larger model appearing in the back seat of a Lyft.

Android Police was sent images of the Pixel 3 XL by the driver of said Lyft vehicle, who discovered the device after dropping off passengers minutes earlier. The driver, already a Pixel 2 XL owner, recognized the next-generation handset -- thanks to its prominent notch -- and snapped a handful of photos before handing it back to its forgetful owner.

Forgotten in a Lyft, it seems, is the new left in a bar.

Earlier leaks have pointed to the Pixel 3 offering a 5.5-inch display with a 2160x1080 resolution and a 2:1 aspect ratio. It'll also likely host a 2,915mAh battery and two 8-megapixel front-facing cameras -- one of which will flick between f/1.8 and f/2.2 apertures. The Pixel 3 XL, on the other hand, is said to be powered by a Qualcomm Snapdragon 845 processor with 4GB of RAM.

According to Bloomberg, both devices will be unveiled at Google's launch event on October 9th, in New York City. There just won't be much left to confirm.

In this article: gear, google, mobile, pixel, pixel3, pixel3xl
All products recommended by Engadget are selected by our editorial team, independent of our parent company. Some of our stories include affiliate links. If you buy something through one of these links, we may earn an affiliate commission.