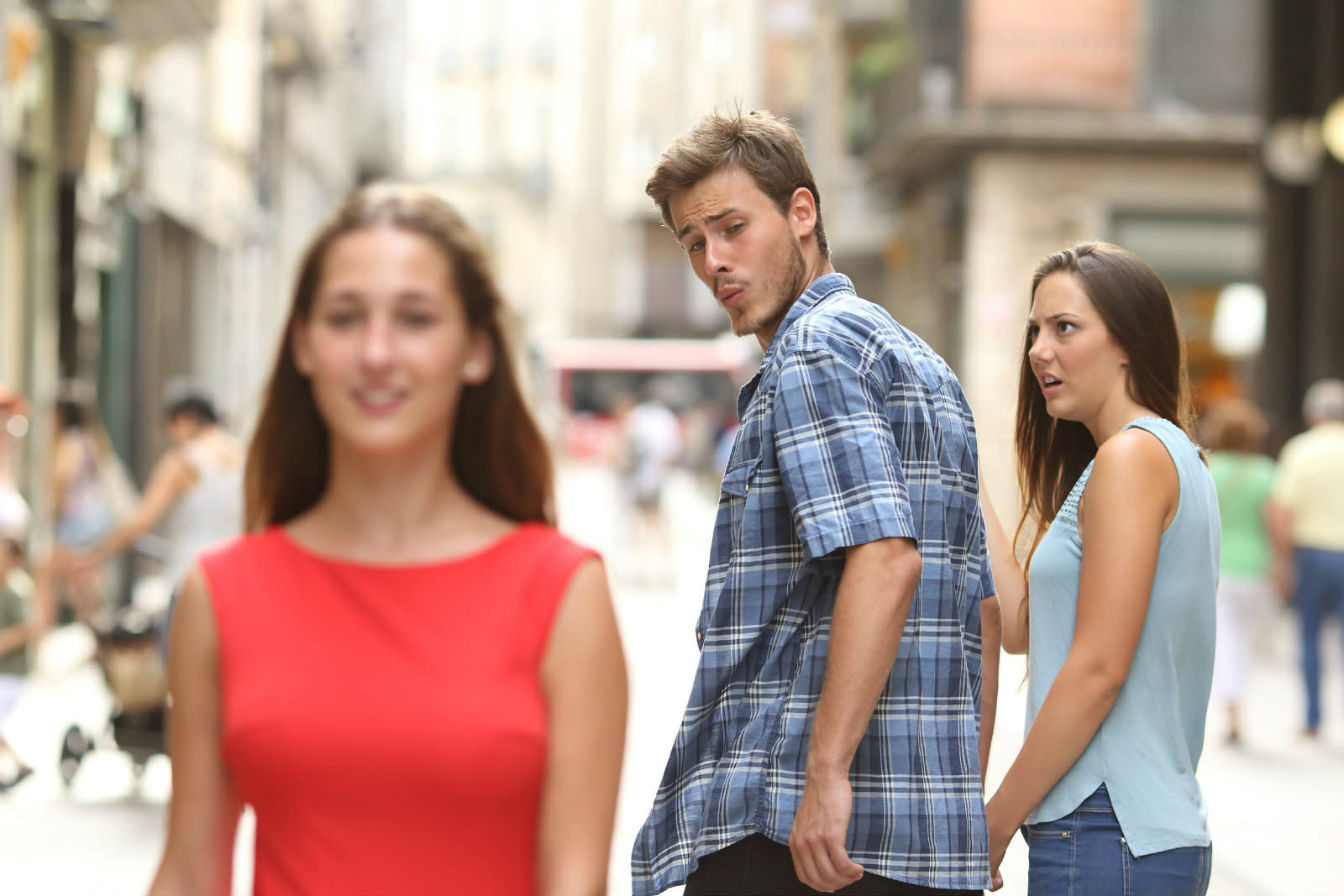 One of the most popular memes of recent times is sexist, according to Sweden's advertising watchdog. A Swedish Internet company named Banhof jumped on the bandwagon by sharing the viral "distracted boyfriend" meme online to advertise job vacancies, only to be chastised by the regulator. The image -- which shows a man gawking at a woman in a red dress while his girlfriend looks on in shock -- is discriminatory to both men and women, ruled Sweden's Reklamombudsmannen.

Banhof's repurposing of the meme showed "you", the distracted boyfriend; "Bahnhof", the woman in a red dress; and "your current employer", the girlfriend looking on in horror. Posted in April, it drew almost 1,000 comments, many from women who lambasted it as sexist, according to The Guardian. In case you're curious, Google offers this translation of the ad: "Looking for a new job? Right now, we are looking for sales staff, operating engineer and a distinguished web designer. Check out our free services page here."

The regulator explained that the meme objectified women by showing the man's "appreciative reaction". It was also deemed "sexually discriminatory" towards men by "imparting a stereotype picture of men looking at women as being interchangeable," reports the BBC.

Though the ruling will have little immediate repercussions for Banhof (you can thank Sweden's self-regulating ad industry for that) it could lead to brands thinking twice about sharing memes. Judging by all the sigh-inducing promotional posts on social media, that may not be such a bad result.

It's also evidence that some people still don't get the underlying concept of memes. In case you missed it, memes are all about putting an original spin on an existing image for comic purposes. And in the case of the distracted boyfriend meme, that meant taking a stock photo -- titled "Man Looking at Other Woman" by photographer Antonio Guillem from Barcelona -- and applying it to both topical and irreverent discussions.

It subsequently became an online phenomenon and was voted meme of the year in April. Now, Twitter users are using the same meme to lampoon the Swedish ombudsman's decision. Enjoy it while you can folks, memes may soon vanish for good if the EU gets its way.

Comments to this article have been closed due to multiple violations of our Rules and Guidelines including: insults, swearing at users, name-calling, off-topic conversation, personal attacks and xenophobia.

In this article: advertising, gear, internet, meme, memes, sweden
All products recommended by Engadget are selected by our editorial team, independent of our parent company. Some of our stories include affiliate links. If you buy something through one of these links, we may earn an affiliate commission.
Share
Tweet
Share